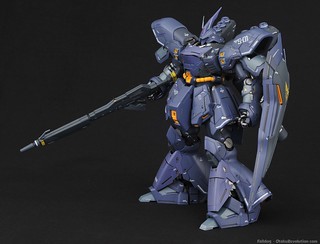 I decided to break this page down into three different sections relating to airbrushing equipment, hand and detailing painting equipment, and everything else that you'll need. Of course, you're also going to need some paint!

Picking out an airbrush can be pretty daunting at first. Here's some information on the basic types of airbrushes...

If you're looking to build Gunpla you're going to need some tools. Thankfully you only need a small set at your disposal to accomplish great builds.

Hello and welcome to the Layman's Gunpla Guide!

Since OR won't let me embed veoh videos: http://www.veoh.com/videos/v1585001SPSJx5t2 So the story behind this is probably better left put in the Rants & Raves section, but suffice it to say I generally HATE anime music videos. So one Christmas in 2005, I decided to sit down and create my own in a three to four day period. It's nowhere near a masterpiece, but I did submit it to MIddle Tennessee Anime Convention just because...well I had an AMV to submit to my local con...so. And it won Best Drama.

I've added extra modules, most noticeably the Captcha module, to handle the influx of spam following my absence.

Also, I just realized that this theme doesn't look so great in IE. If anyone has any suggestions for a new theme please let me know!

New Capcom VS game? Who is Tatsunoko?

That's right. There's a brand new Capcom VS arcade game. It sure did take a long time. I suppose they were listening to their fans. Now, we all know that there won't be a Marvel Vs Capcom 3 any time soon due to licensing issues. However, the new VS game is Tatsunoko vs Capcom Cross Generation of Heroes. Most of you are probably not familiar with Tatsunoko, at least not right away. Given other blog posts here at Otaku Revolution, I can safely assume this will be in your interests. Tatsunoko is responsible for some awesome anime series such as Macross, Casshern, Samurai Pizza Cats, Karas, Speed Racer, Video Girl Ai, and The Soul Taker among other series.

You can read more about it, and see screenshots over at arcade renaissance

Support this release or Nanny dies.

Why aren't you watching this right now? Right NOW. Watch it. Right NOW.

Something we need to learn if we are to take part in the phenomenon.

I think we all need to learn from what this fellow is talking about. Take part in this new phenomenon that's sweeping the Interweb.
Subscribe to