Rebuild of Evangelion 3.33: You Can (Not) Redo Review

(Spoiler-Free) Synopsis: The end of the world has begun! Shinji Ikari finds himself catapulted fourteen years from the last thing he remembers, triggering the Third Impact! Waking to a world that despises him, Shinji is torn in his loyalties, confused about his environment, and guilt-ridden by revelations.  In the depths of despair, he meets a young man named Kaworu Nagisa, who may be his salvation, or just lead to more tragedy! Will Shinji ever pilot an Eva unit again? Should he? The next phase of Instrumentality is set in motion and our hero will find that practice may not make perfect! 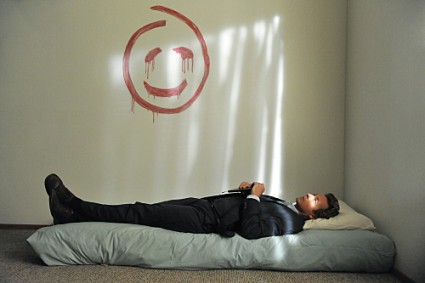 He should have stayed in bed.

Synopsis: The brothers come upon a town where an old acquantince of their father, Majihal, lives. Strange disappearances and ghostly apparitions rile up the community and Ed and Al doubt the idea that people are coming back from the dead. However, Majihal is not all that he seems, and a past love moves him to commit terrible atrocities to regain what he lost.

The Who Gives A Fuck of Haruhi Suzumiya - Episode 22 Review

Damn it, Kyoto Animation. What the hell is your problem? Three, three episodes and you still aren't finished with this single chapter-size short story? Give me a fucking break, this is trolling on a massive scale.

(SPOILERS AHEAD, but don't worry, the third OVA is shit, so if its spoiled, it won't matter.)

Anime, you might say, is a passion of mine, and growing up, an OVA by the name of Tenchi Muyo! (or, "No Need For Tenchi!") aired on the little-known Turner cable television channel, Cartoon Network. It was on the now deceased Toonami block, airing in the afternoon/early evening hours. It had been advertized for a while. "Coming soon: Tenchi Muyo! Love stinks." All right, I thought. Looks good. Science fiction, comedy, maybe some romance. I'd seen a little of the first movie, dubbed, on the Sci-Fi Channel's Saturday morning anime block. I was wondering what it was really all about.