The other week on /m/ a link to ArtsNow.com appeared along with a few nifty coupons. Taking the opportunity I 'designed' a few shirts and placed an order. A week and a half later a bag arrived on my doorstop, a customs declared gift, complete with return address to a random Hong Kong P.O. box. This is the story of those shirts... About the Designs For the designs I used some nice vectors with transparent backgrounds. If you're interested... Team Gurren Logo (Gurren Lagann) (close, looking for original version) Kitten (Gurren Lagann) [I Plan to upload soon] Whole Group (Gurren Lagann) [I Plan to upload soon] Skull Squadron Logo minus Shield & Sword (Macross Frontier) Sector 9 Logo (Ghost in the Shell) The only altering I did was to resize the images down to 1500x1500 per their size requirements. I could have left them at their original size but I doubted they could have shrunk the images without fucking them up. White T-Shirts 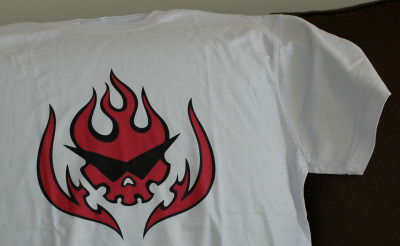 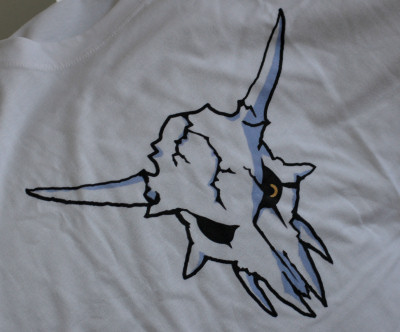 Of the five shirts I ordered the two white ones turned out the best. The screen printed images had no color or design problems. The only issue came from the ink print itself... 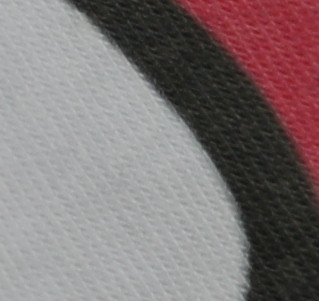 It's sort of hard to tell, but the lines on the shirt aren't very sharp. They're blurry either from poor post image processing or the colors seeping during the print process. If you're standing two or three feet away you don't really notice it yet it's evident to my keen eyes. The white shirts, along with the other colors, are made from a thick (presumably) cotton base that wears nice. The only tag on these shirts is an itty bitty one indicating the shirt size. While the shirts are nicer than most freebie handouts I sadly can't say the same for the print process. Black T-Shirts 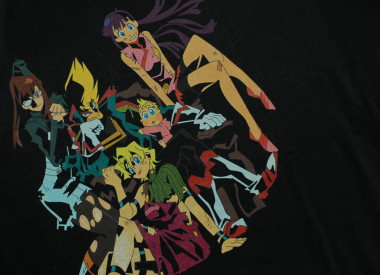 These two shirts I was looking forward to the most. Of course it's only right that these are the ones I'm most disappointed by. I don't know what magical process was used to get these images on a shirt but it's absolute rubbish. Since I'm no expert at t-shirt manufacturing processes I can only describe what's going on and hope that someone can fill in the name for me later on. It seems like the image they receive is printed onto some sort of white medium, which is later stuck to the shirt itself. Simple enough. glorified iron on perhaps? The only good thing I can say about this process is that at least the lines are a lot sharper than the method used for the White Shirts.

Sharper lines? Good. Accurate color? Good. Managing to cover every colored area with color? Hah. As you can see above they didn't do to well to actually color everything in. There are plenty of areas where the white starts to show through, and a few areas where it's right there plain as day. Frankly, this is absolute shit. Even the shirt with the full crew across the front came out awful. I'm sure some of the blame falls on my shoulders for such a busy design (part of why it doesn't look so great) but their quality job doesn't help either. "Dark" T-Shirts 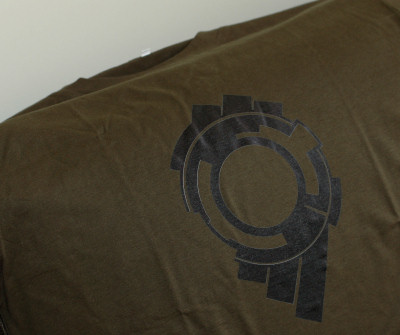 Dark shirts is what they apparently describe their non hallucinogenic colored wares. My white balance was off so the green looks worse than it really is. Printed with the same method as the Dark Shirts the shit quality is really highlighted with an all black image. 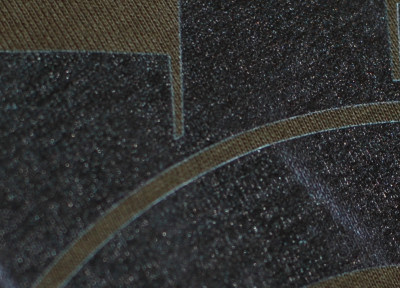 The black ink overlaid on the white undercoat doesn't do a well enough job at covering it all up. Specks of white are all over the place and from a distance highlight the weave of the shirt. The design cutout doesn't even match properly with the black ink, leaving a white boarder around most of the image. I don't imagine this one washing well either. Buttons

In addition to the shirts I ordered a few small buttons to even out the price (aka so I could use the best coupon). While I shrunk the initial images perfectly to fit the buttons somewhere between my computer and the final product things got blurry. Blurry to the point that if I can tell the image is, I can tell that someone needed to sharpen that shit up. At the very least the colors are good... Try it yourself You're welcome to order some of these 'quality' shirts for yourself. At the very least when you hop over to ArtsNow.com don't forget to take the useful coupons with you. Coupon Code TWF60 for $25 off $60 purchase Coupon Code FFT40 for $15 off $40 purchase Coupon Code TEN25 for $10 off $25 purchase Coupon Code FUR10 for $4 off $10 purchase Coupon Code THY30 for 30% off purchases Look out for Part 2 of the review. How will these shirts hold up after wear and wash? I fear not well...
Gurren Lagann
Macross Frontier
Ghost in the Shell
merchandise
Reviews