Dripping with blood, Bard's relationship's a dud, and his plans landed with a thud, even though Batman's name's still mud. All this and more in the thirty-sixth issue of DC's weekly Batman series. It's gratifying, satisfying, illuminating, and aggravating! Harper and Cullen! Red Robin! Red Hood! Babs' new threads! And speaking of threads, what super villain burns at both ends, and counts Joker, Two-Face, and Scarecrow amongst friends? It's our hipster-fashioned Sphinx as crafty as any lynx, Edward Nygma!

"It doesn't make sense... why aren't we getting more coverage? Look at how sexy we are!"

Picking up where we left off last issue, Batman is able to narrowly escape (off-panel, mind you) from the crashing (from a great height) Batmobile thanks to a protocol of Alfred's called "Blue Rose". The meaning of the name and how Julia figured it out in time to activate it isn't explained, but I'm sure at some point will. Batman claims to Bard that he had other ways of escaping, but Bard doubts it. Whatever it is, Julia certainly deserves to use those concert tickets (though with Gotham under martial law, I find it odd that events like that are still going on) for her quick thinking.

It turns out that Jason Bard has a tragic backstory that puts him at odds with the kind of vigilante justice Batman does. It happens. As a cop in Detroit, Bard and his partner (also his love interest) raided a gang hideout but were interrupted by a Batman wannabe. The vigilante sucked and both he and Bard's partner paid with their lives over it. Hush took Bard in as a weapon to use against Batman and got him a transfer to Gotham, where for some reason he was promoted to Commissioner right after Gordon went under because Gotham is weird and Maggie Sawyer should have been promoted way before him, but reasons.

Boo-fucking-hoo, Bard. You're scum. It was super-satisfying to see Batman punch you in the face and Vicki break your heart. You're a tool. 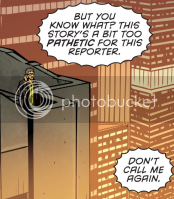 Batman's had enough of Bard's crap, and comes at him with the rest of the Bat family (minus Batwoman, who I guess still doesn't qualify). Bard tries to play it cool, thinking he still has the advantage, but our Dark Knight wants him to know that whatever he tries, he has allies to help him pull through it. Just after they disappear from the rooftop, we get a nice scene of Alfred welcoming them all back to the cave.

"Oh, we're just here to hear about how Batgirl being shocked about her impersonator being a guy is 'transphobic' somehow."

It's good to see everybody together in the cave again, though they had to use another entrance, what with Arkham being right above them now. The problem is that now they have Hush in custody, and even though it's best to keep their eye on him, especially while Bard is still in charge of the police, he is a persistent annoyance, and enjoys gloating about Bruce's situation. Honestly, I'm hoping that they don't give Hush too much panel time at this point, because his part of the story should be mostly done with now. It's certainly possible that whoever is really pulling the strings still has plans for him, but we've had several issues dedicated to our bandaged baddie, and I'd like to see them get back to things like Selina as a crime boss and the nanomachine virus.

"Not necessary, Alfred. We stopped by Subway. December is Customer Appreciation Month."

At least the book is asking the important questions now, about what actually happened to Jim Gordon in the subway tunnel. He was the first domino to fall, and it could be the key to the whole affair. Bruce has to really put his mind into figuring out what connects all the pieces, and it looks like the Riddler is planning on helping. Whatever that help ends up being, I'm sure it'll be just another challenge for our Caped Crusader.

"And who WAS phone?"

"Breaking up is hard to do. You shoulda seen my break up with my kid's mom."

"As soon as I can figure out how to get out of this place without tripping!"