Less than half an hour ago I sat down to catch some classic Simpsons, particularly Radio Bart, the one where Bart ticked Springfield about a boy being stuck in a well, later to fall in himself. During an early commercial break I noticed something familiar, Apple's Cover Flow. However to my surprise it wasn't yet another cheesy Mac ad, but a commercial for the local FOX 5 News... 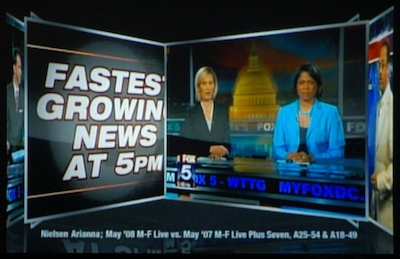 WTTG, better known as FOX 5, is the local affiliate for the Washington DC and the surrounding metroplex. FOX 5 sports some of the worst news I have ever seen as any sensible person in the viewing area can attest to. Incredibly over dramatic acting and sensationalism out the ass. This is the type of channel who's news previews run along the lines of "Something you're eating right now could be killing you, find out at 10!" or "What could be suffocating your children at school? Find out tonight," only to air a scathing expose about parents who pack their children's lunch in reused plastic grocery bags. During a recent batch of strong thunderstorms strong winds and a few small tornadoes caused havoc in the area. During FOX 5's coverage they showed area footage of several trees which were blown over. Despite the meteorologist's best attempts to let people know that it was not necessarily a tornado, but down burst or straight line winds, the anchors continually referred to it as tornado damage. Here are a few more shots of their shit flow in action. I unfortunately don't have the equipment to capture a video, so my apologies. 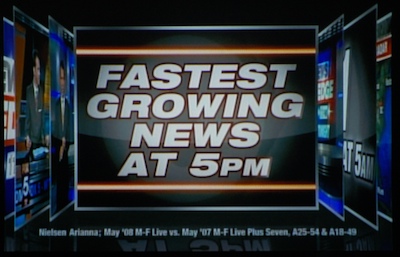 Fastest growing at 5? I blame Maryland. 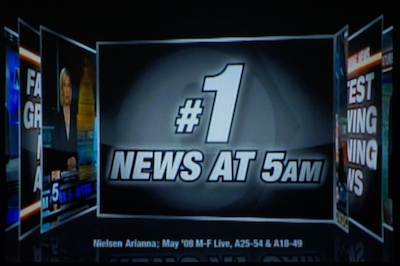 To be fair, I'm surprised to see they could pull of something so 'high tech.' Last night they ran a quick blurb about Barack Obama's rumor control page. While News 8 showed the web page in a reasonable format, all FOX 5 could muster was the page in 600x800 resolution with the font size waaaay up. (Note, while we all know FOX News channel is a piece of crap, not every FOX affiliates' local news is this shittacular. While in Boston last summer I used to watch FOX 25 each morning. Their anchors weren't out to scare the shit out of you and a lot more down to earth. Plus they would get into arguments amongst themselves about local issues, good stuff.)
FOX 5
Cover Flow
Apple
Rants & Raves