First off, let me state that I received all of my information about this series from Gundam Guy. Many props to the man for his excellent coverage of the announcement, leaks, and subsequent releases by Bandai. If you haven't already please check out his extensive post on AGE. In fact, I'd prefer you do that ahead of time so you can form an opinion (if you haven't already) without my corrupting influence.

For sometime now Bandai has been teasing the news of a new Gundam series before millions of egar fans. A few weeks back they stirred the pot once more by releasing a small shadow silhouette shot of the new main suit and announcing a conference and full disclosure, come June 13th. A lot of information leaked last week and sent fans into dizzy. I decided to wait until the official announcement before commenting on the upcoming project. It's allowed for a cooler head to prevail, though the increased information may not have swayed my initial opinion.

While you should check out GG's post for full details on the series here's a start...

Mysterious enemy issues aside (discussed in greater depth in the next section) the premise sounds pretty good. A multi-generational family working together is a new twist considering that the family members of most Gundam protagonists tend to suffer from Chronic Death Disorder. I'm just not sure how they're going to implement the concept. See, at this point we have names for the three generational characters, the age of the first, and character designs for all three. The thing is that everyone looks the same age (see the character designs section for a picture). I'm probably missing something here, but I know I'm not the only one. How this is all going to work seems to remain unclear. Will there be time jumps in the series? Are they planning on seasons 2 and 3 already? We do know that there will be two other AGE Gundams, Gundam AGE-2 and Gundam AGE-3. As they are said to evolve overtime it's likely time travel is not going to happen. *whew*

There's also a new component, somewhat related to Veda from Gundam 00, The AGE Device and AGE System. The AGE system, as it is understood, is able to research "the evolution of living beings by digitizing the mysteries surrounding it." In other words, it is able to learn from the world around it and evolve as it takes in knowledge. The AGE Device itself is the small, cellphone like contraption, pictured above. It is a component of the AGE System and it used in piloting the Gundam. The extent of it's functionality while doing so remains unknown.

Between the character designs, the concept of evolution, and a small handheld device, many are making a comparison between Gundam AGE and Digimon. I can certainly see how the connection is made but I doubt that the series is going to add more to the list. 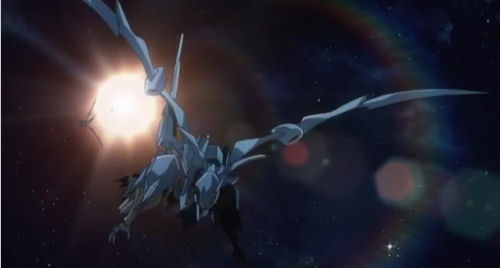 An unknown, mysterious enemy who you've been at war with for over a century? Sounds cool, I you've caught my attention. A space dragon of indeterminate mechanical or biological origin? Now you're starting to stretch it.

I fear that the Gundam 00 movie may have opened up the floodgates more than we realized. Gundam has always revolved around human conflict. The Federation v. Zeon, ZAFT v. Natural, country v. country. This defining characteristic has allowed the series to focus on both sides of a conflict and walk a very ambiguous line with regard to which faction is truly good or evil. The second Gundam starts including mysterious space aliens the mutli-sided prospective is lost. Sure the whole 'last remnants of a society traveling to avoid extermination at the hands of a mysterious enemy' is just as ad-nauseum as Gundam plot lines have become, but it's a slap in the face to a defining element.

The designs are alright, though sort of bland and uninteresting. It's not very unique either. You got your Escaflowne in my Yu-Gi-Oh! You got your Esaca-Gi-Oh! in my Macross Frontier! Meanwhile, the UE suit, in human form, looks alright. It reminds me of the Spearhead from Eureka Seven with a bit of Zone of the Ender's Egyptian influence.

Okay, having focused a bit on the UE designs in the previous section let's take a look at our main man, Gundam AGE. Fairly typical Gundam design elements all around. It is, though, a plethora of angles. There are very few curves and the head looks somewhat over sized in some shots. It also suffers from Gundam00S2itis, best known as Small Feet Syndrome. The airplane-esk v-fin... I must admit, I sort of like it. I even like the large A on the chest. As for my thoughts on the rest of the suit on as a whole, depends what picture I'm looking at. The early promotional posters look skinny and lack any detail (less detail = easier to animate). Some of the models look great others a bit durp. I may hate the series and everything about it but I'm completely in for the 1/48 kit. Then again... not sold on that awful wing of a spoiler there... 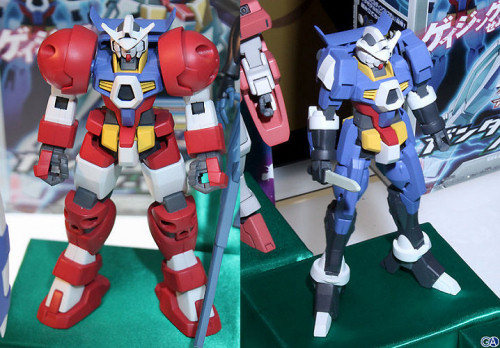 What makes AGE unique is that it has two other armor options which can be swapped out depending on the task at hand. There's a heavy hitter version (Titus), stacked with beefy legs, arms, shoulder pads, and giant hands. There's also a high speed version (Sparrow) where everything is slimmed down for quick movement. I'm not a fan of either of these forms. When I first heard about the armor options I was hoping Sparrow would be awesome, it sounded like my kind of kit. Unfortunately it just looks as though they fitted the Gundam with chicken legs. Titus reminds me a bit of Gundam Maxter or Bolt (boy, those illustrations are awful (yes I know MAHQ didn't do them)). I wonder if they're going to have an outfitting sequence like the one in Zoids Zero. 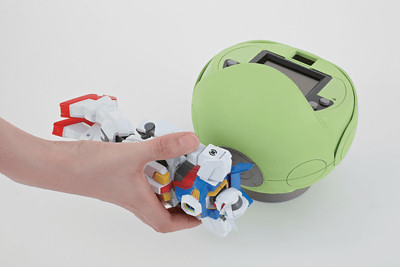 It's common knowledge that Bandai operates around the premise of hocking merchandise but the extent to which they're moving forward with Gundam AGE is just shameful. They did everything in their power not to lead the reveal with their new products. And oh boy, are there a lot of products...

And that's just to start! Imagine what else they'll throw out when the Christmas season hits. Imagine what all will come out during 2012! Bandai has completely out done themselves. Despite what you might think about Gundam AGE but Bandai did it all for the $$$.

A Gundam For Kids

The idea that the new Gundam is geared toward kids has irked a lot of fans. For Bandai it's a strategic move to ensure profits and the length of the franchise. Unfortunately both arguments are just as valid.

A vast majority of Gundam fans grew up with with it, either while it was airing in Japan or more recently during it's admirable run on Cartoon Network's Toonami. The aging community is longing for a more mature Gundam with a rich story, strong action, and multi-dimensional characters. We still wax nostalgic about 08th MS Team and 0080 like there's no tomorrow. Neither Gundam SEED or Gundam 00 have fulfilled that need which perhaps explains why Gundam Unicorn is perceived so strongly. There's no indication at this point that AGE is going to develop a storyline for the ages (I'm sure you'll see that pun quite a bit over the next few years).

For Bandai the argument is simple. Gundam AGE is about marketing and products, which are better geared toward children. A maturing Gundam fan base is less likely to spend the same amount on Gunpla, DVD sets, and various other forms of merchandise. From an economic prospective it only makes sense that a company is going to target the group most likely to generate revenue.

It can also be argued that every now and then a long franchise needs to be reset to draw in new viewers. It worked to an extent with Gundam Wing and SEED. By going young Bandai hopes to nurture a whole new generation of kids drawn to Gundam robots (and their reasonably priced figures).

On a side note, it's worth pointing out that age has never been related to maturity when it comes to anime. If we're to judge based on the preliminary information, without any understanding of the story or knowledge of character development, that Gundam AGE age will be immature and simple then we must remind ourselves the ages of Amuro, Kamile, etc. I do, however, think it reasonable to make that assumption based on the character designs. Maybe it's just as an invalid perception, but one that's certainly understandable.

I don't have much to say with regard to the character designs. They're certainly not the best the franchise has seen but they're far from the worst. It seems to me that they decided on simple design for the sake of an easier animation process. They're also, obviously, geared toward children. The trouble is that it's impossible to gauge their personalities from the designs. That and everyone either looks either old or young. There's no range of in-betweens like the fantastic designs from Eureka Seven. A good series needs a diverse cast. I'm sure we'll see that in the future but it's hard to get excited while lacking those details.

It's certainly a fresh approach for Gundam. Oh, and then there's this.... 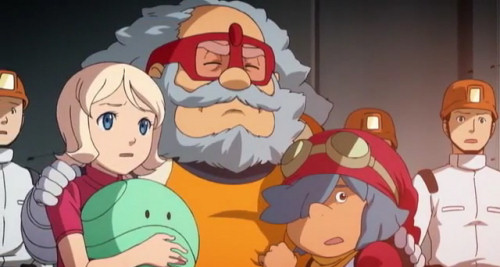 Maybe we'll get a special episode drawn by Leiji Matsumoto

Just be glad the designs were not done by Hisashi Hira. *shutter*

The general reaction to Gundam AGE has been less than pleasant. Lots of bickering from every side of the fan base about every little detail. I suppose that's nothing new though, is it?

Maybe it's just because the crowd I generally swing though is older but the vast majority of comments have been very negative. When information was first leaked folks were extremely angry and attacked the show and Bandai for their decisions. Since then, along with the official release, a lot of that anger has dissipated, but moods have not improved.

Comments with regard to the age of the protagonist seem the most prevalent, despite the wiser pointing out the youth of most Gundam leads and supporting characters. Attitudes toward the suit designs are mainly of moderate disapproval. They do seem to have a higher appreciation of the UE designs than I. I have also seen others complain about the aliens angle.

At best, those looking forward to the series seem to be making their comments through clenched teeth. They seem sort of empty, without any supporting arguments, in contrast to the wordy and aggressive haters. There are those with rational heads who are willing to give the series a try before making a final judgement. Granted, even those vehemently against the new concept will likely watch the first few episodes, if only to complain in detail.

Remember, they say beggars can't be choosers. Not that I always agree...

Only time will tell where this series ranks among the great pantheon that is the Gundam franchise. Personally, based only on the information provided thus far, I think we're looking at a sub-par addition to the franchise. It will likely do well from a financial standpoint but not rank among the best in terms of production value or plot. Until October I will keep my fingers crossed and hope to be proven wrong, in a good way.