Legend of the Galactic Heroes: Die Neue These Episode 01 Review

Episode 01, "In the Eternal Night" 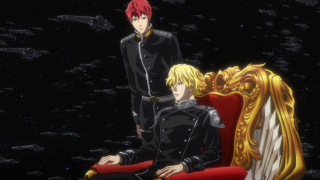 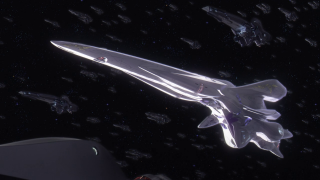 Synopsis:  In the distant future, mankind has colonized a swath of planets in space, where are there are three major forces, the Galactic Empire, the Free Planets Alliance, and the Phezzan Dominion. The Empire has been at war with the Alliance rebels for over a century, with no sign of reaching a climax. A young and brilliant Imperial admiral named Reinhard von Lohengramm and his assigned forces take on a combined three fleets of the Alliance with relative ease due to his clever planning. However, just as complete victory is to be achieved, an obstacle appears in Reinhard's path, and history will change because of both men. 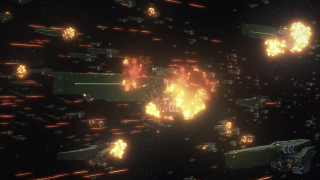 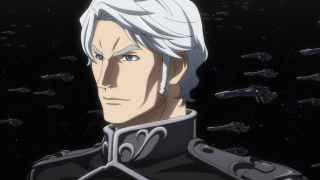 Sentai Filmworks is putting out all of the classic Legend of the Galactic Heroes anime, all at once, in one set, for 800 bucks. Now, let's clarify. That's three movies, the 110-episode main OVA, and 53 episodes of the side story OVAs. No English dub, Limited quantities. Granted, it's a voluminous quantity of material.

It's also a completely insulting price tag that Japanese executives are greedily imposing on a market that does not bend to brutal price dictates. I'll be shocked if the 1000 copies available are even all bought. And when they aren't, the Japanese executives at Kitty Films, or whoever has the rights, will simply conclude the North American market has no interest in the product, rather than they're charging too much for it.

I want to blame Sentai Filmworks for going along with this, but honestly, their only fault in this is a lack of transparency. And who can blame them? If anybody knew it was going to be this way ahead of time, nobody would have gotten excited over this. You don't ask people for 800 dollars in one lump sum for a 20+ year old anime! For fuck's sake, even if it was eight hundred dollars over a few releases it would still be too much! Make no mistake, Sentai Filmworks isn't stupid. They're not the ones behind this price. It's some shortsighted Japanese committee who insist that LoGH is such a classic, NA audiences will be willing to pay Japanese prices.

Well, head's up, buddy. You won't find many. Any that you do are morally deficient monsters with no conscience or sense of economic responsibility. You can get a down payment for a car for that. Not a great one, but a real, working vehicle. LoGH is fantastic, but eight hundred dollars is just insanity.

I'm judging you, as a human being, if you buy this set. You are destroying the curve we've all agreed on when it comes to anime pricing. Don't be an Aniplex of America-type of consumer, the prestige collectors who just want to climax over their chipboard boxes and Special Edition TV-Broadcast-Order Haruhi Suzumiya sets (the latter I admit foolishly purchasing). Sentai has announced there will be no standard edition. This is it.

Then again, Bandai Entertainment said as much about Zeta Gundam.

Either way, this release is a slap to the face. Just release the movies in one set for $40-50, each "season" of the original OVA series at $50-60, and... I don't know, sort out the side stories similarly. Give the people time to recoup their losses in purchases. FFS, you didn't even bother dubbing it, you fucking cheapskate pricks!

But I digress. I'm supposed to be reviewing the first episode of the new incarnation of Tanaka's masterpiece novel series (the novels are available by Haikasoru, a branch of Viz Media). It seems as though Funimation managed to grab this version, as they'll at least be dubbing it into English. It's less a remake of the original TV show and more a re-adaptation of the original books. Think Brett Ratner's 2002 movie Red Dragon versus Michael Mann's 1986 movie Manhunter, both based off the same Thomas Harris novel starring infamous fictional serial killer, Hannibal Lector. There will obviously be similarities to the original adaptation, but it's not strictly bound by them.

One staggers with the question of just why such a production ever needed to exist to begin with. Tanaka's novels have been adapted in a beloved anime that, as I mentioned, spanned quite a lot of releases, so why reinvent the wheel? Is this a Stephen King thing where the author dislikes the popular adaptations of his works and seeks to have them redone? Or is this a cynical cash in on a named property people have consistently shown a willingness to consume? Well, obviously the latter, even if the former were true, and I haven't seen any evidence of that.

As such, LoGH is still LoGH. The story begins at the Battle of Astarte, Reinhard starts picking off the Alliance's fleets to the skepticism of experienced officers, Reinhard makes small talk with his beloved friend, battleships explode, and Yang Wenli gets in the way. The first episode is basically just the same as the first episode of the original OVA, just with less of Yang himself (in favor of establishment shots at the beginning, apparently). Jean-Robert Lapp is still doomed, Alliance commanders refuse to believe good advice, and we get a whole lot of destruction while Reinhard watches from his posh, comfortable commander's seat.

There's not a lot to say very early on here. The CG is a mixed bag, but I do love some of the energy in the battle once the fighter craft are released, and the voice actors do at least competent jobs sounding indignant at the audacity of youth. I especially enjoy Mamoru Miyano's turn as Reinhard, as I imagined I would when I first learned of his casting. I miss the classical music score of the original with its obsession with Gustav Mahler, but the newly composed soundtrack is workable.

I just don't really see the point to this yet. I probably won't for a while. Except that, I might actually be able to afford this when it gets released. 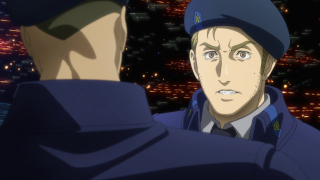 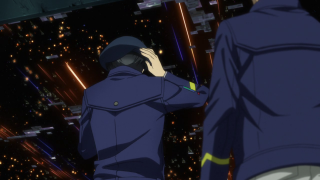 Better than spending $800 on a single set, that's for fucking sure!