Legend of the Galactic Heroes: Die Neue These Episode 04 Review 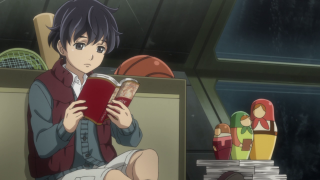 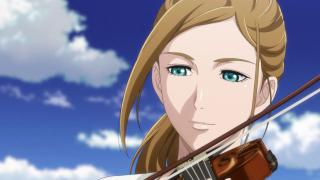 Synopsis:  A younger Yang Wen-li attends Free Planets Alliance Fleet Academy, where he meets his future longtime friend Jean-Robert Lappe, as well as music school student Jessica Edwards. There, despite his middling grades in most subjects and preference for historical study over military, he proves to be a brilliant strategist. After graduation, he's assigned to a post on the planet El Facil, which comes under attack by the Galactic Empire. Using the fleeing commander's ships as a shield, Yang evacuates the citizens, earning notoriety, and a double rank promotion to rear admiral. He's moved into a house and is presented with the opportunity to take a child in as apprentice, but is reluctant. On a snowy day, however, a boy arrives at Yang's door, with a suitcase. 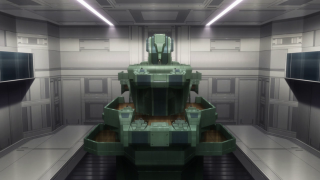 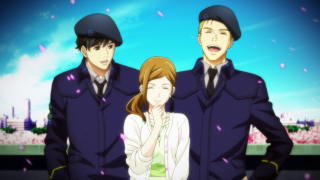 I wasn't quite expecting this episode to go the way it did. But given the previous episode, I probably ought have.

Instead of moving onto Chapter 4 of the first novel, they took a lot of backstory from the first chapter which they excised from the first episodes and expand a little from  the book material. They even shifted some dialogue and scenes to highlight Alex Caselnes, Yang's neighbor and friend, and the War Orphan's Act. The effect this seems to have is to provide Yang with a little more emotional stake in the events that led to the present time in the story, and establish early his close relationships with certain characters. The way everything is framed is not by referring to a time that Yang was a young man, but rather show it as if it's happening in the present.

One of the interesting bits they included that I was happy to see was a pre-credits sequence that featured our hero's father, Yang Tai-long (Yang is the family name and their names are Eastern style, unlike most other characters). The novel goes into a short history about Ya--er, Wen-li's father, trader and collector of antiques. Yang's mother was his second wife after making it big in his business, but she passed and Yang spent a lot of time polishing those antiques with his father. Eventually he spent much of his time in the corridors of a trading vessel, mostly reading books. When his father died, he was bemused to discover that most of those doted on antiques were actually forgeries.

Of course, they left a lot of that out, probably to keep a more positive image of his father in the viewer's mind, as he did pass along some geniune wisdom. To show him as a person who spent most of his time polishing his collection while a nanny raised his child might sour that opening scene. Personally, I like the mixed presentation of Tai-long in the book, but as far as this episode is concerned, the scene they show makes more sense, leaving us more time to follow Yang through his meteoric rise in rank in the Alliance fleet.

The original OVA, and especially the movie Overture to a New War which expands the first two episodes, presents the Yang-Edwards-Lapp relationship as having ambigious lines, at least between the two men and Jessica. Yang seems to be attracted to her, but Lapp is more assertive and engages her first, both literally and figuratively. In this episode, it's pretty clear that Jessica is already with Jean-Robert from the start, though Yang obviously enjoys her company. This makes Yang's rising star seem all the more miraculous and pure, because he was thus far unsuccessful in life, even in relationships.

What's most important, though, is that they retained that the military academy swallowed the history department into military strategy and tactics training. The Free Planets Alliance even re-purposes war orphans by paying for their way so long as they become soldiers when they're of age.  The so-called republican democracy has poured all of its sources into continuing the conflict with the Empire, often employing incompetent, self-serving commanders like Lynch, who flees El Facil with no intention of evacuating the citizenry. Yet Yang still has faith in the original ideals of the Alliance, making his commitment to save as many as he can often frustrating for him.

If there's a major flaw in the episode, I'd say that it's in the otherwise good simulated battle scene, which oversimplifies how Yang beats Wideborn by him just simply attacking the supply ships. What he actually does is ensure that Wideborn has to overextend himself, stretching his resources too thin. In this episode it seems just like some instant, no-brainer move that everyone else would have to be dumb not to think of before. But that was only a paragraph in the book, so I guess it's not like it was a whole chapter cut down to seconds.

I was expecting this week's episode to cover Chapter 4, which features Defense Chairman Job Trunicht, Julian Minz, and Yang's disdain for military ceremony, but I suppose that will wait until next week. I wonder what the FPA's theme song in this series will be like. Liberty stands for freedom... 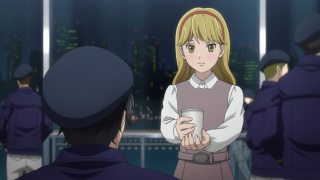 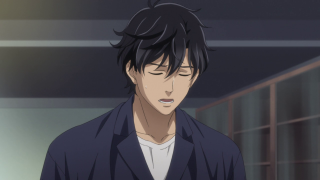