Legend of the Galactic Heroes: Die Neue These Episode 08 Review 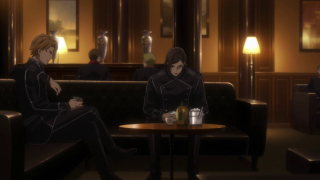 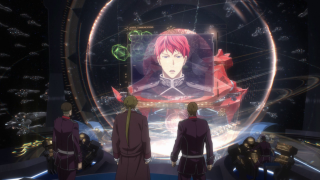 Synopsis:  Reinhard von Lohengramm assembles his admiralty of several talented officers, and assigns Rear Admiral Kircheis a task for which he would earn a promotion. The mission is to put down a rebellion from a hoarding aristocrat, Maximillian Castrop. Kircheis takes a small fleet to subdue the rebellion by luring the overconfident Castrop into a trap. Reinhard's other subordinates are impressed. It's then that Reinhard is visited by Paul von Oberstein, who fled from the battle at Iserlohn, and will be court martialed for desertion. Oberstein proposes to help Reinhard overthrow the royalty, and while initially suspicious, Reinhard relents to helping the dour man, exchanging a favor owed for a pardon. Reinhard plans on using Oberstein as he is being used by him. 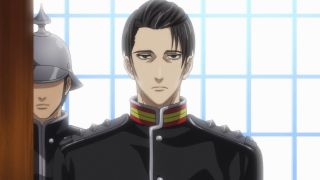 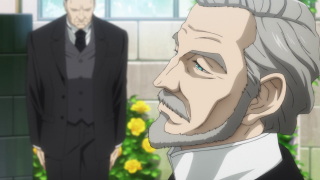 So, this is based on the first half of Chapter 6 of the first novel, and is pretty dead on accurate to each basic plot point of the book, with a few exceptions. For one, the fall of Iserlohn comes at the very beginning of the chapter, and the recounting of the Castrop incident is presented as a flashback to a few days earlier. We even get a bit of the history of Castrop and how he chased away auditors and the like with genetically modified animals.

Another is that Kircheis' tactics are different, with his fleet diverting as if to assist the Mariendorf territory in its bid to repel invasion, only to, at the last moment, head directly toward Castrop's  district. After hiding in an asteroid belt, Kircheis' fleet ambushed Castrop's forces who were lured out and swiftly devastated them.

The last difference is that in the book, Reinhard reflects at length at the withering potency of the Goldenbaum Dynasty. The man who deprived him of his sister, Kaiser Friedrich, was a weak echo of the man who'd started it all, Rudolph, in vibrancy and power (though that's probably for the best, since Rudolph was horrid). Reinhard thinks of how the royal family is dying out on its own already, the Kaiser's various lovers having birthed stillborns or children that have already died, and of the few that remain, none are much of a threat to him. He also thinks of how glad he is Friedrich never impregnated Annerose, and how even the thought sickens him. I suppose you couldn't really put all this in the episode, since they do already sort of express the weakening royalty visually with the Kaiser's indifferent attitude towards the lineage.

As far as the difference between the OVA and TV show, the biggest is the visual representation in of Castrop's little fiefdom, which in the OVA calls to mind the rein of Julius Ceaser (or more likely Nero or Caligula). Certainly very Roman in appearance. Castrop is depicted as corpulent fellow who meets an ignominious end at the end of his subordinates' knives. In the TV show, he's a foppish Germanic-type noble as the others are, and is gunned down on the bridge of his ship by soldiers not wanting to give up their lives defending an abusive criminal asshole. Neither is more accurate than the other, though, as the novel only reveals that Castrop was killed by his men, not how, or even what the decor was. I just happen to prefer the OVA visual, even if it's a little on the nose.

This is the first episode we get to see a few of Reinhard's chief subordinates, and the first episode we get to hear Vice Admirals Mittermeyer and Reuenthal speak, all in added scenes. Some of these officers are mentioned in the chapter in the book, but they don't have speaking roles. In the TV series, they've already had plenty of lines by this time, but the TV series is looking to adapt the books closely. I'm glad they at least added these parts, as it's always a pleasure to see Reinhard's team assembled. Their voice actors seem to be doing a good job, too, from what I can tell. There's a dynamic between Mittermeyer and Reunthal that the others in the admiralty don't have, a closeness, but also a stand apart level of respect given to their abilities when compared to the others.

My favorite part of the episode, though, and one of my favorite scenes in all of LoGH, is Oberstein's pitch to Reinhard and his reaction. The scene really shines just as much in this adaptation as in the OVA's version, too. Oberstein is a devious mind, but when it comes to something he wants directly, he can be very frank, so he doesn't even really test the waters before spilling seditious intentions to Reinhard. He stays as collected as ever even when Reinhard summons Kircheis to arrest him and makes it clear that he can do the things that the other vice admirals can't or won't do. This big gamble on his part pays off and Reinhard returns with his own gamble of taking Oberstein into his group and confidence. Both he and Reinhard want essentially the same thing in that they desire to overthrow the Goldenbaum Dynasty. They both know that the other is using them and they're okay with that, as long as the ends are met. The way the scene plays in this episode has sold me on Junichi Suwabe's Oberstein, and of course Mamoru Miyano's Reinhard is excellent, too.

The musical score is growing on me, too. Even if it isn't too varied, it's used well. The scene in which Castrop's subordinates turn against him, for instance, has the perfect "serious confrontation" track. Or the classical-sounding track that plays during Mittermeyer and Reuenthal's conversation. Or Kircheis remembering who has his true loyalty. Nothing is out of place or droning. Do I still miss the classical music from Mahler and the like? Sure. But this show's soundtrack is nothing to sneeze at.

It's back to the Free Planets Alliance in the next episode, where we'll likely see the High Council meeting in which the plans to invade Imperial territory are discussed and Yang reflects on the dwindling infrastructure on Heinessen. Not a lot of action, but some interesting political maneuvering. 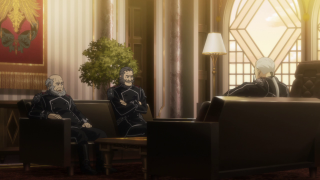 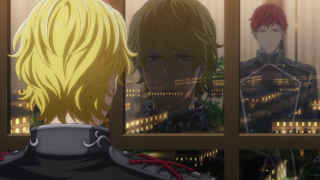