Legend of the Galactic Heroes: Die Neue These Episode 11 Review 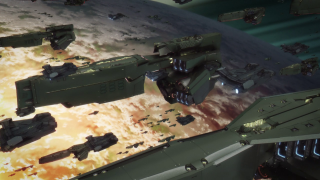 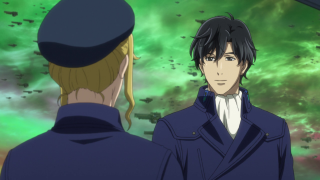 Synopsis:  The Free Planets Alliance forces enter Imperial territory, expecting to be greeted as liberators, but the citizens are more concerned about receiving food. This causes them to overextend their supplies to fulfill the needs of the masses, but when the expectations cannot be met, riots break out. The Alliance fleets become desperate for supplies of their own, and Yang surmises it was an intentional stroke to get them to run out of resources, breaking promises to the people (which earns them ill will) and leaving them vulnerable to an all-out attack in the meantime. He suggests to the other admirals that they should withdraw from the area. Admiral Bewcock attempts to inform Supreme Commander Lobos, but is forced to engage with Commodore Falk. Bewcock berates Falk's casual attitude about the concerns on the front line, causing him to pass out from stress. While Kircheis goes to sortie against the FPA's supply line, Reinhard assembles the rest of his admiralty to strike at the main forces. 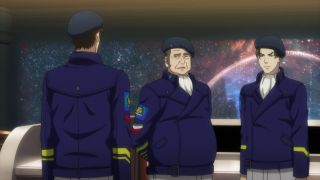 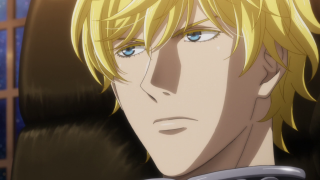 "History doesn't repeat itself, but it does rhyme." - Unknown (usually attributed to Mark Twain)

Ah, in every time, in every place, the deeds of men remain the same. That was the philosophy of the Legend of the Galactic Heroes OVA. Well, actually, it was just the text that flashed at the beginning of the second OP, but it might as well be the central philosophy of the franchise itself. The parallels to recent history are so eerie, one could not be entirely blamed for thinking this was based on those events, when they were written of decades ago by Yoshiki Tanaka. Because truly, these are events that happen often in history. Just, uh, usually with less spaceships and lasers.

Andrew Falk's grand proclamation, as well as those of a few other officers in the FPA's invasion force, that they will be seen as heroes to the citizens of the Empire, was naturally wishful thinking on their part. The citizens are more interested in being fed than being "free". We all like to claim that freedom is more important than life itself, but when it comes down to it, Maslow's hierarchy of needs holds true. It's hard to dream of freedom with an empty stomach. It's just like the debate over healthcare. If we have to tax the wealthy for the sake of the general welfare of society as a whole, it's morally justified, because people can't work or contribute if they're sick or dead. When the FPA forces can't meet the demand soon enough, it seems like they're just a bunch of liars. So much for winning the hearts and minds of the people. Sounds awfully familiar, doesn't it?

Though it is odd that this adaptation left out a piece of the plot that helps you understand the desperation. You see, it's explained in the book and OVA that this is all part of a strategy on Reinhard's part. First, he cuts off supplies to the frontier planets. This will force the FPA, who see themselves as heroes, to give their own supplies to help the citizens. This will limit the FPA's resources, so they'll have to call for more, or even worse, take some from those planets, instead of giving supplies away. This has the double effect of draining the invaders' supplies and make them look bad to the people they're supposedly there to rescue. In this episode, it just seems like the FPA made a premature vow to the people and reneged.

At least most of what I deem the biggest highlight of this half of the first arc (and the first book), Andrew Falk's meltdown, is retained, complete with Bewcock's indignation with both the smug up-and-comer and the supreme commander, Lobos, who's busy taking a nap. Bewcock rightfully derides Falk for not understanding the situation on the front, being too comfortable at Iserlohn to truly understand the increasing inviability of the invasion plan. Falk is clearly somebody who isn't used to be opposed. Perhaps he was a coddled child, or maybe he never had to face real adversity because everything until this point had come naturally to him. He may be talented on paper, but in application a failure. Whatever the case, he has a full blown conniption and collapses. It's hard to have any sympathy for the guy because of his arrogance, but he could have at least avoided this if he hadn't insisted on being the go-through for Lobos to begin with. Surely Admiral Greenhill would have been more suited for that. When it comes down to it, Andrew Falk is all rhetoric and little substance. The FPA again shows that much of its leadership is piecemeal.

I am pretty concerned, though. There's only one more episode of this season, and I don't know if it can possibly finish all of the first book's material. I'm assuming the final episode will contain the Battle of Amritsar, but does it also have room for the court intrigue? Aw, man, if they make it some kind of cliffhanger... I mean, it will be, regardless, since there's way more of LoGH to be (re-)adapted, but you know what I mean. The invasion material and its immediate aftermath.

Overall, a great episode, despite that bit they should have left in (they could easily have trimmed the long shots of ships taking off for its mention). I just hope the studio can pull off a memorable season finale. Also, I hope they can continue this into the second book and beyond. Because as I said at the beginning, it sure beats paying 800 bucks for the OVA boxset. 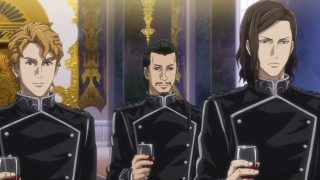 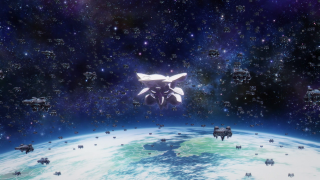