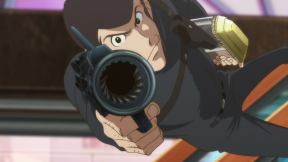 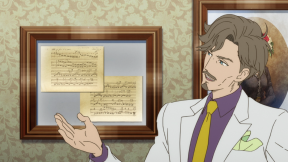 Synopsis: Inspector Zenigata is arrested! The ICPO believe old Pops has been secretly colluding with Lupin this whole time, abetting his crimes! But there's no time for our bored bandit to sort that out, as he's challenged to retrieve a special black diamond that can be used to complete a quantum computer. Somehow, a kidnapped girl named Alisa, the works of Frédéric Chopin, and the President of the United States is tangled up in this, but that's not the only surprise! It seems that Lupin's hetero life mate, Jigen, has betrayed him! Why, after all these years? Will this be a Revolutionary Etude or a Tristesse? Goodbye Partner hits all the right notes! 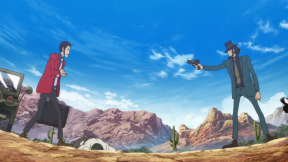 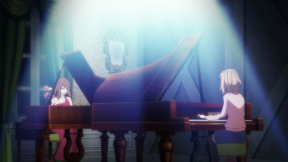 Comments:
It's been a while since I've written a text review for a Lupin feature, and even longer since it was a television special. Actually, it's been a while since there was a TV special. The previous one, Italian Game, was basically just a compilation of a few Lupin III Part IV episodes with some added bits. Like Gundam 08th MS Team's Miller's Report, I suppose. The TV specials had once been a staple of Japanese television, one every year for decades until they slowed down. It was for the best, though, because they were getting really bad. Princess of the Breeze, from a few years ago, was a desperate attempt to recapture the magic of Castle of Cagliostro, that face planted.
But with Goodbye Partner, TMS may have let the TV specials join the Lupin III Renaissance, because it was startlingly good!
Maybe I'm just a sucker for Chopin. Especially Opus 10, Etude Number 3 (usually in E), or "Tristesse" ("Sadness"), a favorite of anime producers and music composers, apparently, because not only do we hear it a few times here, but you'll also hear it in 2003's Fullmetal Alchemist TV series, the third Tenchi Muyo! OVA, and the "Baby Blue" short from the anthology Genius Party. It's also probably my favorite piece of music of all time. The TV special also features "Revolutionary Etude" (Op 10, No. 12). And Chopin's music and way of piano-playing are a key to activating and accessing the quantum computer AI, Emilka (named after Chopin's nickname for his younger sister). You incorporate my favorite classical composer into your anime, you have my attention.
I was concerned that the black gem would have been some kind of magical object that controls all computers... which isn't too far from the truth, but it's not a supernatural force, it's techno-magic/bullshit. The AI that forms its own sentience apart from its controllers is well-tread ground, but I just can't help it, Emilka is just too cute. I'm not sure how that supercomputer is "quantum", though. It's not breaking physics or anything, it's hacking into bank accounts, building droids, and re-routing resources. But at least this is somewhat topical in today's climate (especially given Roy's insistence on "America First!"), given the questions about technological singularities and redistrubution of wealth. The TV special doesn't explore those topics with any great detail, but they echo the zeitgeist in which it's been created in as atmospheric background.
The special was advertised as depicting a big rift between Lupin and Jigen, but the Lupin vs Jigen element was over in a little less than an hour into the ninety minute run time. Apparently, Jigen had been in love with the mother of Alisa (the young piano phenom villain Roy kidnaps to access the AI), but felt he couldn't give her the life she wanted, since, you know, he was a hired gun and thief. Eventually Alisa's mother and father both died and Jigen has made it his duty to protect her, even if he has to go up against his buddies, Lupin and Goemon. This is a decent angle to the story, but I wouldn't have named the whole special after this element, I would have leaned into the Chopin one.
There are a lot of great scenes in this feature. The opening chase sequence, with Lupin's casual escape in the face of great danger, Lupin's diving between laser trippers on his way to the diamond (only to hit an alarm tile immediately after), the bit with Lupin disguised as a Goemon lookalike while Goemon is disguised as a captured Lupin, subverting expectations, was funny, any time Alisa and/or Fujiko tickled the ivories, Lupin and Jigen finding and using the German railway gun, the AI singing... this Lupin adventure is packed full of memorable moments. It never has a shortage of eye-catching visuals and humorous situations.
Goodbye Partner is a rare solid Lupin TV special that I wouldn't mind rewatching, or even owning. I hope Discotek picks this up and even dubs it. It gives me hope that the TV specials may just have some more life in them. 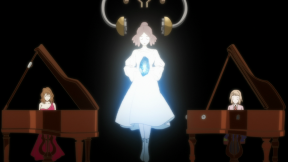 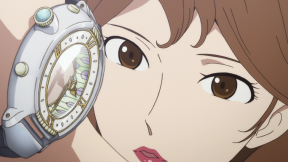