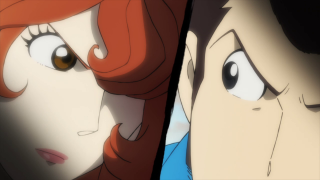 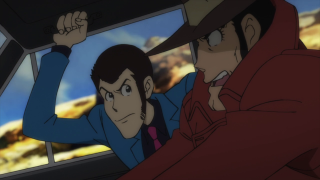 Synopsis:  Fujiko Mine joins the Lupin Game, but before she can shoot our monkey-like marauder, Inspector Zenigata arrives to save him and Ami. Although he provides a friendly ride to Lupin, he does plan to drive him somewhere he can legally arrest him, but Lupin takes it in stride. The three are forced to trek through a desert on foot, evading a warlord's forces, before reaching the border. But can they make it across before their luck runs out and the Lupin Game is won? It's a race to the edge with a shocking ending! 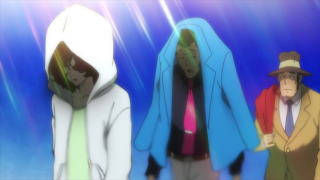 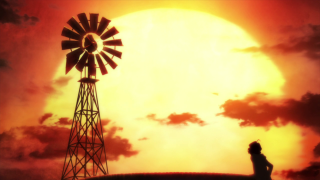 My mistake in the second episode review. Apparently Bwanda isn't an area in Cameroon (or in the Congo, depending on what Google search result you get), but itself a fictional African country in the world of Lupin III. Cameroon actually is part of Interpol (ICPO) (and so is the Congo, somehow). You shouldn't assume African countries just aren't part of Interpol, me. That's borderline racist, guy. Pretty much all of Africa is in Interpol. Well, I guess not Bwanda, but that isn't real. Not as real as your cultural insensitivity, that's for sure.

You know what nation isn't in Interpol? San Marino, the country featured in the previous series. Huh. I'm pretty sure they pointed that out in the very first episode of Part IV.

Anyway, as usual, Fujiko is prepared to turn on Lupin when a big reward is dangling in front of her. As I said last time, she's a habitual backstabber. But there's a bit more going on with her that's fairly subtle... until they pretty much give the game away before the conclusion (and even then, the next episode preview spoils it). I love Fujiko's rejoinder to Jigen's line about women being scary, that loyal friends can be just as frightening. Is that just because Lupin's friends include the best shot in the world and an unstoppable samurai who can cut anything, or is a snide remark about her preference for ambigious allegiance? It could be taken either way, I suppose. I was hoping for more of her in this episode, and... well, I'd better wait.

The bulk of the episode is about Lupin, Zenigata, and Ami trekking across Bwanda, looking for a way out before the next group of killers (this time the military) catch up. Lupin has had plenty of desert experience, such as in the movie Mystery of Mamo. Naturally, Zenigata is pretty sturdy, despite his layers of clothes (he does remove one layer for a while) Ami, on the other hand, is used to a cool, indoor environment, so she collapses, and later is the first to run to a water source. Fortunately for the whole group, Bwanda apparently has great wifi, because she's able to guide them with maps/GPS and the like.

There's an interesting scene around a campfire, where not only does Ami speculate on a romantic nature in Lupin and Pops' relationship (which Zenigata adamantly denies and Lupin jokes about), but Zenigata has a chance to learn a little about her, along with the audience. She insists that there's no reason for her to go to school, as she's already well versed in math, technology, and anything and everything the internet can provide with its vast stores of information. Zenigata wonders if she can make friends, and she glibly remarks that she has internet buddies. But ol' Pops doesn't buy it. "Love and friendship aren't things you can measure in purely logical terms." He believes she should be in a social environment. Lupin is too busy being impressed with her usefulness and confidence in her skills, but Zenigata thinks she should try living the life of an ordinary girl.

It really does seem like Ami is pretty detached from the outside world and only identifies with people through a controlled environment (controlled by her, that is). I know the feeling. But as they say, a hundred travel books aren't worth as much as a single trip. When Ami has to assist in springing a trap on an attack helicopter, she's frightened, but when it succeeds, she's jubilant. It's a rush she's never felt before. Lupin smiles at her laughter, the first time he (and we) ever hear it. Some things are better off experienced in person.

I'd just as soon stay entirely away from being chased by assassins in the first place, though.

Do they really think the viewer is dumb enough to think that the people who "killed" Lupin weren't Jigen (sniping) and Fujiko (or Goemon) (spotting with binoculars)? It was pretty obvious this was all a plan to get Lupin off the radar for a while until he can shut down the people behind the Lupin Game (and maybe make some money by having a confederate get the winnings). I'm afraid I'll have to deduct at least a point for telegraphing that twist.

Still, a pretty good episode, added a lot of heart, and I'm really starting to appreciate and feel affection for the new girl. But I wonder, if the next episode is the final part of this particular story arc or if this will continue the entire run. I like the storyline, but I'd also enjoy seeing some classic-style Lupin one-offs. 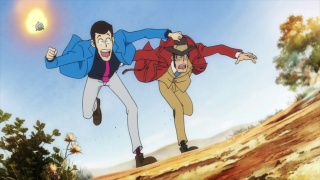 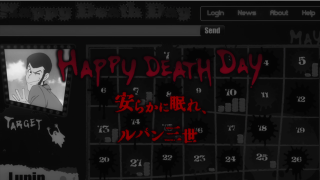