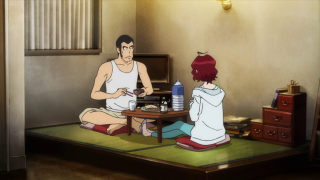 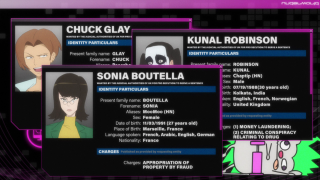 Synopsis:  Lupin is dead! Or is he? The proprietors of the dark web's Marco Polo service believe themselves victorious, while Inspector Zenigata is reassigned to narcotics and shelters Ami at his apartment. Lupin's gang seems to be moving towards some goal, though, and surprisingly, Ami interviews for a new, dangerous job. What happened to Lupin and will our teenaged techie talent take a deadly dive? It's the conclusion of a five-part story as we see who really won the Lupin Game! 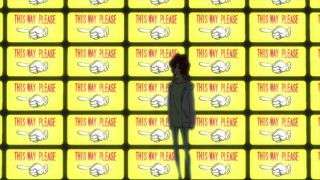 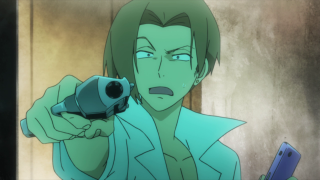 Maybe it's just because I've seen basically the entire franchise, but I was not at all startled that what I expected as having happened in the previous episode was, in fact, exactly what happened. Obviously Lupin wouldn't be dead, or that would be a pretty short show. And either because of my experience with Lupin adventures or just because I have, you know, a somewhat functioning brain, everything went down pretty much exactly as I predicted in my previous review. I'm not patting myself on the back. I'm sure most of you figured it out, too. But actually, it still managed to be pretty fun to see how Lupin would spring his trap.

It's amusing that Peecaboo/Chuck Glay lives in an abandoned shopping mall (something which is increasingly, depressingly common... the dead malls, not living in them), like Akira Takizawa from Eden of the East. I made a similar parallel in my review for the first episode of this that the recognition software driving the Lupin Game reminded me of the Eden system in EotE. Just something that tickled me as I watched this, is all. I think living in a mall would be pretty neat, actually, if I had the money to buy one. Now that is "fuck you money". If only Zenigata didn't know about the place, it would have been a neat hideout for Lupin and the gang to take over for a while.

Speaking of ol' Pops, it was interesting to see how the good inspector lives when he's not chasing Lupin around the world. We so rarely get to see domestic Zenigata, and probably for a good reason, as it's kind of pathetic. I suppose his apartment isn't too small, for a Japanese civil servant that's pretty low on the totem pole, but there's just something about him sitting in his shirt, eating soba in dirty apartment that's kind of warmly pitiful, and yet so him. After all, who needs a grand home to come back to when you're too busy chasing a globetrotting master thief? The Spartan way of life is all he needs. At least he's a good dude, fulfilling Lupin's request of him by taking in Ami. Honestly, I'd have been safisfied if he adopted her.

Ami does get a happy ending, though. It looked bad for her when she was drowning strapped in a chair in Glay's lair, but Lupin promptly rescued her (and freaked him out). A great moment was Ami admitting that the outside world was annoying, but being around Lupin in it was the time of her life. I just hope she doesn't get too bored just going to school like a normal teen (well, a fancy boarding school, it looks), because it's kind of a step down from hanging around with the Lupin gang. Then again, if she does get bored, she can always assist them again!

Apparently there's some treasure in Spain that Lupin is interested in, so perhaps we'll see that in the next episode or so. Except, wait, is that Lupin in the Part III pink jacket in the next episode preview?! Jigen and Goemon are also in their Part III colors and the tone of the story seems very Part III-esque. Well, I hope it's a little less absurd than that. I never cared much for Part III. I'm willing to give this next part some latitude, though, because the past five episodes have been some of the best in the franchise.

I mean, just look at the gorgeous, lush, painted environments in the establishing shots, from a city skyline, to the apartment complex, to the diner at dusk, to the boarding school's entrance, this episode is a real work of art. 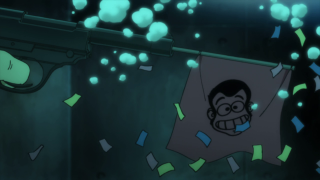 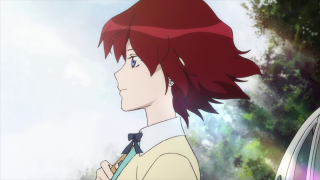