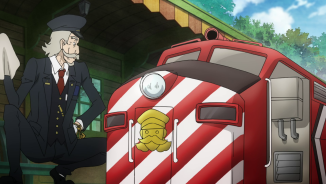 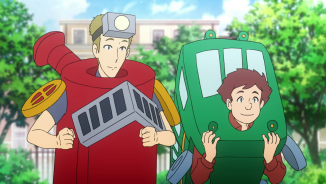 Synopsis:  Lord Marquess, eccentric millionaire, posesses both a large play train that encircles his property of realistic world environments and the first ticket ever distributed in England. Disguised as the South Ahud Republic's President Arackney, Lupin looks to fool the old train fan while Fujiko infiltrates his property. However, Marquess' butler Morton has his own designs on the ticket and Zenigata's interference even further complicates matters. Can Lupin, Jigen, and Goemon avoid being arrested and save Fujiko from a gruesome fate? All aboard this fun little caper that has more detectives than sense! 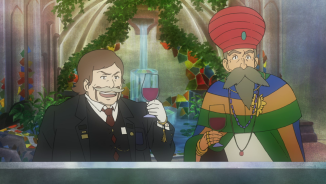 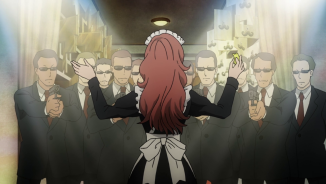 Ah, a classic one-off Lupin III caper episode. This time Lupin and the gang go undercover at a rich old guy's party hoping to nab the valuable, historical old boarding pass he's been keeping locked up. But things become awfully convoluted when two brothers, nephews of a NYPD detective, insert themselves into the party, each looking to court Fujiko, and meanwhile the butler of the train otaku has his own plans. There's a lot going on here. A lot of characters.

Too much. Too many.

To call this episode a step down from the previous two is putting it mildly. Even besides it not being an arc episode, and thus an interruption to the "Lupin vs Holmes" story, it's not a particularly strong standalone, because it's incredibly overloaded with characters and situations, as if they needed to fill in time for an adventure that didn't have enough to make it on its own. You have the Lupin gang, the butler, the brothers, Inspector Zenigata, and the NYPD detective all crossing paths in various ways, but for a single episode of a TV series, it's a bit bloated, as we don't get a very good feel for half these characters.

But that isn't to say that the episode is horrible. It has some charm to it. Lupin and the gang taking charge of the party preparation and replacing the South Ahud Republic's President gives them an interesting position in this caper. We don't see them until a few minutes into the episode when the old man, his butler, and the brothers have already been established. So it's like we're going along falling into Lupin's scheme ourselves as we follow the other characters. Lupin and the gang don't really take over as the POV characters until about halfway through. It sort of mirrors their "outsider" status in the previous two episodes where it was really more from Holmes' perspective than our favorite theives'.

There were a few little bits and pieces I also enjoyed in this episode: Fujiko pretending to swallow the ticket, freaking out the butler's men, Lupin setting off the fireworks, the little girl the brothers come across, Lupin and Pops exchanging words as they run, Lupin in a slow speed chase on the back of a pony, Fujiko's confidence in Jigen's skill, the brothers getting a smooch from Fujiko, these are all wonderful little nuggets that boost the grade of this caper.

But forget this episode. Next episode is scripted by famous anime director Mamoru Oshii! And it looks like a doozy, too. I can hardly wait. 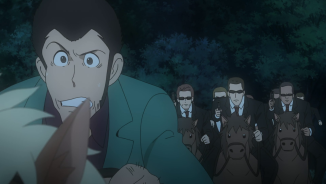 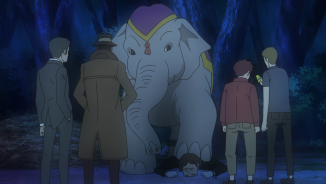