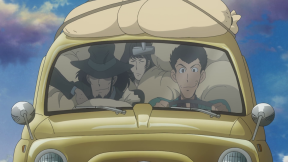 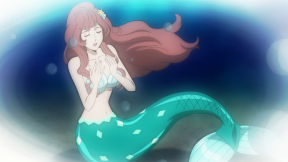 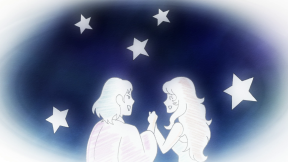 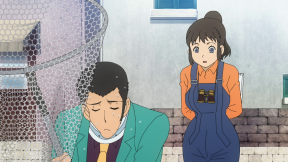 Hm. Another pretty basic episode. And next week's looks about the same. Is this show running out of steam, or what?

Granted, this was a cute little episode, with a bit of charm to it, which is more than I can say for some others, but it feels so unconsequential, even from a character perspective, that it might as well not exist. There isn't even a good heist. All we really have to lean on is the characterization of the one-off player, Muru.

But who is Muru? Apparently she's the village's local daydreamer. In a very One Crazy Summer kind of way, Muru spends most of her time imagining scenarios, including what the relationship between the Lupin gang is when she views them from afar. Believing that Fujiko is a mermaid taking human form to seek love, she also attaches meaning to her interactions with Jigen and Goemon that are purely in her head. Amusingly, when Lupin hits on Fujiko, Muru considers him the least likely to win the affections of the "mermaid". She considers him as just a monkey-faced man with no chance.

Of course, while he can acknowledge Fujiko as a "fine woman" (as he did in "Episode 0"), Jigen is the least likely to be attracted to our faux mermaid, and the most likely to be exasperated by her attitude. Goemon has usually been fairly weary of Fujiko, too, considering her dishonorable and decietful, so he's not about to talk to her about the stars. The both are flummoxed that Muru misinterpreted them that way. And then they dismiss the whole thing to go fishing. It's Lupin that intends to truly pursue Fujiko romantically, as he is wont to do, despite being "monkey-faced".

A bit I really like in this episode is Lupin explaining to Muru his philosophy on love. He gives her the usual shtick you hear about how despite its trouble, love is a great treasure, which is cute, but more than that, "love isn't something we can see clearly". This is an unconventional, novel perspective, considering most people would say love makes things very clear in some ways. But for Lupin, his troubles with Fujiko, and women in general (though some women are quite taken with him) are like seeking not just a valuable treasure, but a hidden one.

Other than this, though, there's not a whole lot to say about this episode, and I'm getting a little tired trying to pad out these reviews with my thoughts. Episodes don't have to be Tomoe-related, but they do have to be good, FFS. This episode was a little bland. 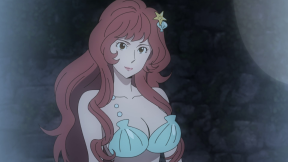 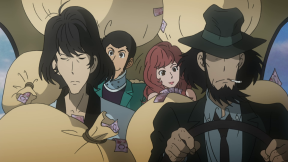