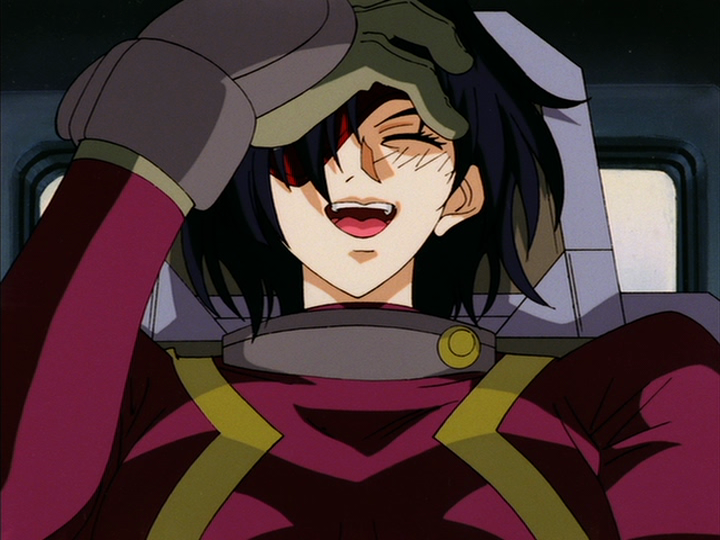 …However the space battles are not as exciting as they were in the first episode, and if the opening and episode 1 prologue are any indication, the best is yet to come. One can’t do too much with firing lasers on the run on ships that are immune to lasers. So what is there then to make things interesting? Well, introduce a fourth character out of the five showcased in the intro of course: Aisha Clan-Clan. The intro pretty much spoils she’ll join the crew in the future, but I guess it’s nice to see how she and the other three in the intro (Gene, Jim, and Melfina)get their destinies intertwined.

Unfortunately for her (and the viewer’s ears), it does not go very well. Her boisterous arrogant self who gets indignant at Hilda’s outlaw defiance fails to not only stop the woman, but also reveal how kindof out of the loop she is for an (eventually former) Ambassador Plenipotentiary of the Ctarl-Ctarl Empire. This Empire looks to be quite a big deal given the way Jim talks about it to Gene, and the size of the ship Aisha was in, nevermind the rather extravagant bridge and large, eager, crew of it. However, we will have to wait later to see more of it based on the events of the episode. By its end, Aisha is demoted from her ambassadorship and ‘marooned’ on Blue Heaven while the ship carries on without her, with much enthusiasm from the crew I might add. I wouldn’t say it’s a GREAT first impression, but it is an impression all the same.

The pleasant surprise after YEARS since my last watch of this, is finding out the McDougals appear quite earlier than I remembered. Most of the time is spent with the older brother (Ron if I remember correctly?), and their presence is minimal. But the discussions among our heroes about them, and the rapport between him and the TPP (Tao Priestess Pirate) imply a duo one should be looking out for in the future. Probably also helps they’re a big part of the intro too.

So this leaves us with how our heroes fare in terms of development. Jim is kinda waylaid for most of it, taking up gunner support, while we get quite a bit out of Gene, Hilda, and Melfina. Gene spends most of the episode swigging some drink and being spacesick as the episode whizzes by him, until Hilda gets his ass into gear rather easily. It’s necessary and proper to be sure, but there isn’t any tension felt between those first two with the latter getting frustrated at the former’s inaction so much she blows up on him. Then again, she’s Hot Ice Hilda, so her emotions running wild may not be in character. I guess it is fine, but it could’ve been more. Melfina has some nice moments again, where without saying a word (or even as the scene’s focus) she holds onto Gene’s hand when he is under pressure from what is happening. It’s a nice touch to her character, and her moment with Hilda where the outlaw promises she will not use her is good too, if brief.

Anyway, it is good the transition period between Blue Heaven and the ship in question is brief too. By episode’s end they arrive at the mysterious ship in question. This ship, envisioned by Pirates and built with Space Force technology, looks to be the kind of ship which would instigate quite a battle for it next episode. What’s gonna happen? And what’s with this Galactic Leyline the characters have started talking about? Who knows?

…Actually, I kinda do, but I’d rather fully know, that’s why I’m rewatching this series.