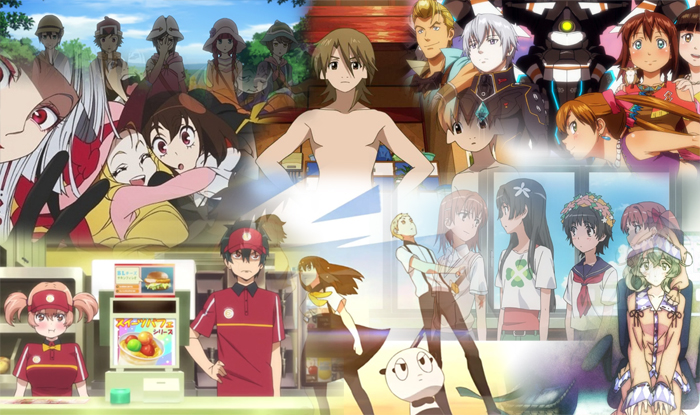 2013 was my first year watching anime simulcasts, and I really dove in with both feet. I watched upwards of 40 shows this year (including retroactively watching a few of the carryovers from Fall 2012), and had a blast experiencing the new shows as they aired and discussing them with fellow fans. Watching a show as it airs certainly has a different dynamic than marathoning one from several years ago, both in the fact that the discussion it is more current and ongoing, and in the fact that the surprises held in store (especially with regards to original shows) are still unknown. Having watched shows like Mahou Shoujo Madoka Magica retroactively, I was aware of the tonal turn the show took (even though I didn't know exactly what would happen). Other shows that I watched retroactively, such as the 2012 carryover Zetsuen no Tempest, were spoiled for me entirely (by accident), which definitely took some of the edge off the surprise (and boy does Tempest have a couple of big surprises in store).

Instead of the standard "Top 10 list" I decided to write a quick paragraph on several shows that particularly appealed to me this year. There were a few instant selections, but there are many shows that exist in that median territory of being good with some great parts, but never really fully achieving true greatness. Therefore, these selections, for the most part, mirror the shows that I personally enjoyed the most. I will add some comments on each selection, and since this isn't really a countdown list, I will also crown my Anime of the Year 2013 (which in itself is a bit of a complex endeavor. Read on to see why).

P.A Works' Uchouten Kazoku was a big surprise for me. I rarely see anime with such a mature artistic vision, both in terms of visuals and of plot and characters. It has a very distinctly unique art style, and tells the kind of story you'd expect from the Art House world. It's charming, emotional, funny, and ends up telling a very interesting story about coping with loss.

Gatchaman Crowds proves that victory can be snatched from the jaws of defeat with some good creative work. From its mere existence as a years-later addition to the popular Gatchaman franchise, to the not-so-stellar production values, Crowds had a lot working against it. And yet, it managed to gain a very loving audience due to its terrific vibe and message. Along with a genius dual seiyuu performance by Mamoru Miyano and Maaya Uchida, and a brilliantly fun and catchy score by Taku Iwasaki, Crowds dealt very interestingly with the culture and dynamics of social media, but did it in an extremely fun and entertaining way.

Before watching Railgun S I liked the Raildex universe quite a bit. After watching Railgun S I realized that I loved it. Finally this franchise delivered a product that fully met its potential. The high production values, the great balance of actual plot and "filler," and the great retelling of the Sisters arc that meshed together with the same events from the first season of Toaru Majutsu no Index, Railgun S was J.C. Staff's tour de force Raildex Show. One can only hope that possible future iterations of this franchise (Hopefully Index III) will remain at this level of quality.

Hataraku Maou Sama (The Devil is a Part-Timer)

A show about a demon lord working at a McDonalds. How could this possibly be great? And yet it was. Maou-sama's blend of great comedy with some actual plot was just right. It looked great, and the inter-character dynamics were funny and entertaining throughout. I really hope they will continue the show, because I was pretty sad to bid farewell to that world.

This choice may raise a few eyebrows, but I still insist that Sasami-san was one of the completely underrated gems of 2013. A Shaft Technicolor explosion of random weirdness and obscure mythology, Sasami-san is original, interesting, funny, and quite a bit deeper than people give it credit for. It has a stellar voice cast and eclectic visuals, and quite uniquely, the weird plot points are actually thought-out as opposed to being thrown in for the sake of weirdness alone. This show definitely isn't for everyone, and I can see many people just not getting it, but I always like shows that take risks, and this was anything but your run-of-the-mill hikikomori story.

Suisei no Gargantia (Gargantia on the Verdurous Planet)

Gargantia appealed to me quite a bit as a fan of science fiction. There were plenty of little details and touches that many science fiction works outside of the written novel world gloss over or don't bother with at all. Gen Urobuchi's world feels dense and detailed, and the characters go through real arcs and grow as people. Ledo's search for meaning and purpose plays out very convincingly, and his moral struggles feel like they make sense. I have mentioned before that I like the "villains" to have proper motivation, and this is very true for Gargantia in more than one sense.

Fans of the 2011 and 2012 ONA were getting me hyped for this show well in advance, but even their (and subsequently my) fanatical love for those shorts didn't prepare me for how great this show was. Every aspect of it worked perfectly – from the characters, to the odd storytelling, to the interesting visual creative choices. It tells a simple and heartwarming story about family, but wraps it in a fantastical acid trip of craziness. I always have a lot of respect for shows that find creative ways to convey ideas and concepts, and Kyousougiga never missed a single opportunity to do this. The rich visual narrative really helps deliver a solid emotional punch, and despite its truncated length, the story feels full, complete, and not rushed. If carryover shows from 2012 did not count, this would have been my Anime of the Year....

I won't say much about Shin Sekai Yori since I already wrote about it at length (it's a spoiler free review, so feel free to go read it), but never in a million years did I expect to be as blown away as I was considering first appearances. But oh boy, there are very very few shows that impacted me emotionally as much as it did.

Overall I crown my first year of simulcast watching a big success. There were very few shows I actively disliked, and for the most part I found positive things about almost everything I ended up watching. Can't wait to see what 2014 will bring.