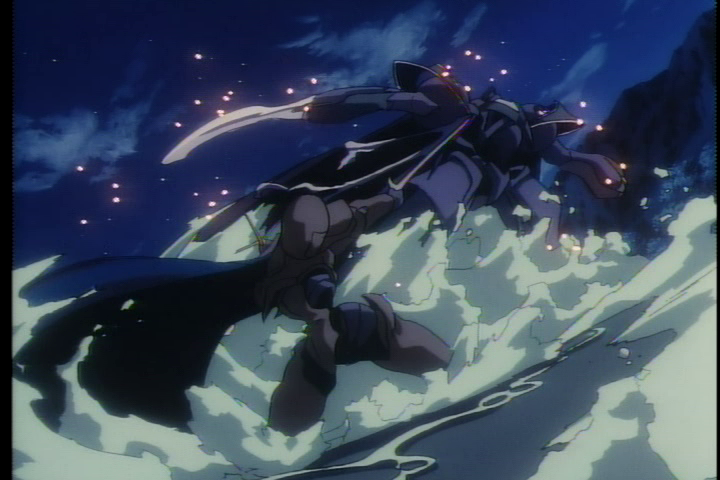 The entire first half of this episode is dedicated to discovering how Van gets his wings, and it is done in a way bereft of any sinister machination on his father and mother’s parts. In fact it’s very fairy tale in its execution, for the union is the product of destiny and love at first sight, and before things turn to shit it somehow becomes a happily ever after. This first half could’ve devolved into schmaltz, but it is saved by the show’s usual deftness in quality. It’s the green tint that colours the flashback; it is the melancholic variation of Wings (from episode 5) that plays when the lovers first meet, the conviction in both of their resolve, the way they show their affection for their progeny, and the tragedy of an unanticipated death. Juxtapose these events with Van being open about it while moving forward to the next objective and you’ve got something to hold onto when it comes to endearing traits of the King of Fanelia.

The second half of the episode is then dedicated to bringing the whole gang back together. For all the pomp of having to separate from one another in more ways than one, the entire issue is resolved by episode’s end. I’m unsure if they planned the separation to be longer had they got more than 26 episodes, yet here we are. It feels a bit anticlimactic, but on the other hand they’re all going to the same destination anyway so it is probably for the better they get reunited all quicklike. The most surprising part of this is having more details of Millerna, who we find out is not just some lovestruck royalty. It seems our dear Princess also has a desire transcending the usual rigmarole of noblesse oblige, and wanted to be a doctor before Eries put the kibosh on it. It comes off as a bit too convenient for it gives her something to do when Allen gets seriously injured around episode’s end. Then again, it is a dimension to her character never mind gives her a reason to tag along. Hitomi has that tarot card clairvoyance, Merle is a reminder to Van of Fanelia and can be useful if certain things require traits of a cat (like how she helped Van save Hitomi in Episode 7), and so Millerna I guess has to fill in a role instead of just being there. Fair enough.

I think that’s what describes this episode: Fair enough. Yeah in the context of Escaflowne it’s great, but looking back, eh, I guess it’s pretty fair relative to other episodes. Once again though, the fun part is in Freid, and that is coming next episode.

Flying Dragon – Yes yes. You’ve heard this music at least thrice already before it is used in Episode 9 (Episode 5, Episode 7, and Episode 8), but this episode has the best use of this music. While the title hearkens to the titular guymelef, whenever I think of this music piece, I think of Allen, swooping to the rescue of Van twice while still looking very nice. The brass horns heralding a heroic descent begin a rather dynamic piece which accentuates any daring-do our protagonists put their minds toward. Then, like Wings, the strings lift the piece up as if it were gliding, until ending at a pleasant stop, as if it landed gracefully at its destination.