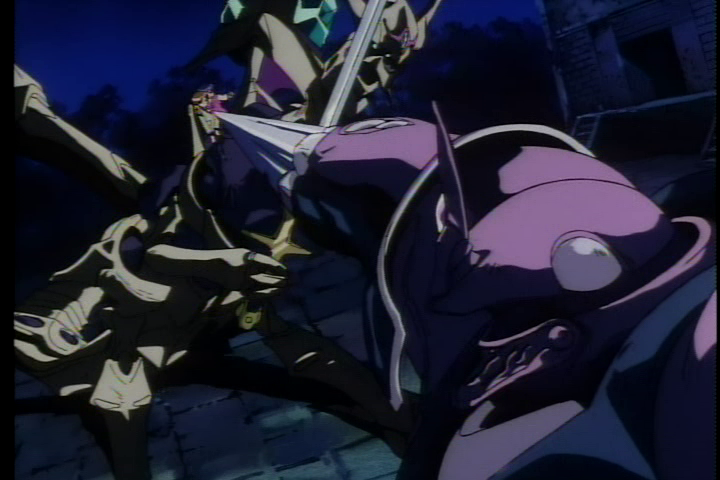 It’s intriguing because, being a regular high school girl; Hitomi is incapable of breaking her hypnosis with Zongi, and by and large spills what our heroes did the past few episodes. Thus, it seems they might be in for a troublesome time in Freid. However, due to Zongi’s curiosity about how Hitomi’s ability to see the guymelefs of Zaibach, his touching of her pendant triggers some world building. The fun part is how all this exposition about the history of doppelgangers is revealed by Hitomi while still under his thrall. She doesn’t know any better, and as such her power is amplified and relays his past to him inadvertently. It’s a great way to showcase one of Gaea’s more obscure races without breaking into a sordid narration and wasting time on why doppelgangers get a bad rap. It’s all weaved into the tapestry of the current story, and culminates into a fine scene which not only gives us sympathy for the doppelganger, but also a glimpse at the ambition of Zaibach. 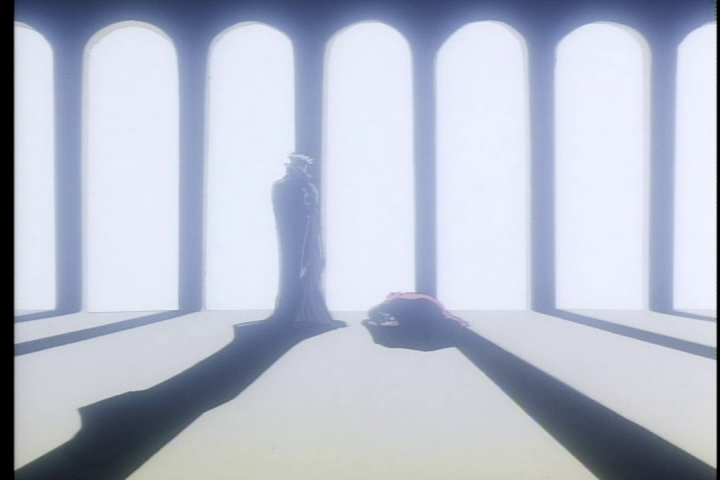 Whatever the empire’s plan is, it’s compelling Folken to take in the outcasts of Gaea for it. The mystery builds…

…Then Hitomi dies. Obvs, she lives after a markedly tense attempt by Van to resuscitate her, yet all is not lost. Her death brings a kind of desperation and concern out of the young king, and when he succeeds in her reviving her, we’re treated to a face like this. Serving as a nice contrast is the markedly stoic Allen, who keeps a cool head and instead finds ways to facilitate their attempt to save her. This little band of disparate individuals have taken a shine to this stranger from the ‘cursed’ Mystic Moon, and all want to see her alive. The shine is well-warranted, because it also reveals that despite the near death experience and the revelations revealed to her, Hitomi is filled with genuine concern over the fate of the doppelganger. Her decency and bravery once again come to light when she heads off with Van to save him. What a gal.

There are at the very least two unfortunate flaws in this episode. One, this is the last time we’ll see the doppelganger race, which is a shame because it’d have been interesting to delve further into their place in Gaea. Second, this is the only time we see Escaflowne fight in dragon form. It makes for a very well-done action setpiece against Dilandau in an abandoned temple with only its sword as a weapon. A nice way to differentiate the endearing if clunky guymelef fights the series is known for, though. Like the sniping claw scene a few episodes back, it’s something you’ll remember.

Anyway, the worst person to know of Hitomi’s gift now knows of it, and this is even with the happy ending of the Duke of Freid’s return. How will this go about once the invasion of Freid takes place? We’ll see, but it’s probably still gonna be good.

Shadow of Doubt – I’ve been meaning to spotlight this earlier, but I had already planned ahead before remembering this and didn’t want to deter from it. It’s a perfect piece that accentuates the mysterious plans of the Zaibach Empire. The ethereal string work evokes an aura of intrigue when the agents of that Empire, be it Folken or Dilandau, move their chess pieces across the board. You’ll always know when you hear that you ought to pay attention to what they’re planning.