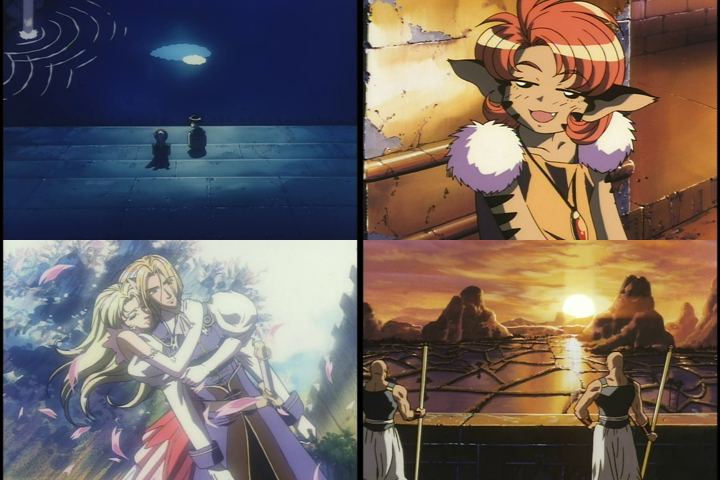 I couldn’t really find ONE good image to use for the showcase so I had to use four. For a non-action episode, it is chock full of such great dynamic shots rivaling that of Episode 5.

Sandwiched between last episode’s events and a nascent invasion by Zaibach being set in its last few minutes, this episode tries to cut three sticks of tension-brand butter with one knife in its 22 minutes. Needless to say it succeeded, because it not only answers a lot of lingering questions but also reveals multiple dimensions of all our characters. The ones who gain in this regard are our two ladies: Millerna and Hitomi, as the episode focuses on them the most. Millerna gets a great scene at the beginning where she defends Allen’s decision to leave Astura from the displeasure of the Duke of Freid (who doesn’t take kindly to desertion). As per usual, the shots (as seen above), the music, vocal performances, and the fact that it takes place IMMEDIATELY after an episode with a more optimistic ending, elevate what could’ve been a mundane scene. Then it is bolstered by Millerna’s open declarations to Allen of her devotion to him over her country, and the subsequent revelation she learns in a chance encounter with her older sister Marlene’s diary.

Two things of note: one, while it is revealed Chid is the progeny of Allen and Marlene, the former is relegated to the background for most of the entire episode. This provides for Millerna a chance to come to uncover the truth her own way, and also helps to reinforce how guarded Allen is about the past. Given Marlene’s death and his conversation with Princess Eries a few episodes back, it is no wonder he would do so. It’s a nice creative touch, right down to utilizing the same BGM used then for now: Cradle Song. The second thing of note is how despite the passage of time, Millerna still loves her late sister, which not only makes the revelation have more emotional oomph, it also reveals she was a cute kid back in the day. 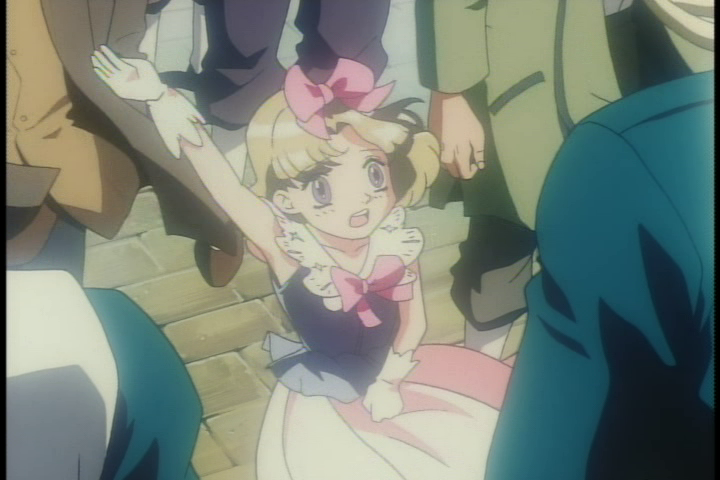 Hitomi on the other hand has seen better days. We’re at the halfway mark in the series and now her fortune telling powers are wearing her down. I’d be worn down too if I keep getting visions of some naked weirdo getting consumed by liquid metal then being crushed to death. This causes her to tell off Van who asks for her support in the oncoming invasion before the halfway mark (during a nice scene of him sharing rapport with the Crusade’s crew). Can’t say I would blame her, and the pressure the well-meaning Crusade crew inadvertently gives to her through their support of Van’s idea didn’t help much either. Still, it is not all about moping, since she has time with Chid (fulfilling what could’ve been a throwaway line of Chid asking her for a fortune a few episodes back). I don’t think they speak too much after this, but there is some inspiration to be found in this girl doing the best she can, and helping a young prince on his problems too. Shame, it lead to Hitomi through her card reading to finding out Chid is Allen’s son.

Speaking of which, even if it is true, the show doesn’t really desire to dwell on it or make it a major plot point. Millerna confronts Allen of his dalliance with her older sister, and moments before he could finish a sentence, the Duke of Freid reveals himself to be of superhuman hearing and declares across a large room that Chid is HIS son. Then he gives Allen this amazing death stare. While he may have spared Mr. Schezar from death, I don’t think he’s still all too happy he was first if you know what I mean.

How that’ll affect them the next episode when Zaibach brutalizes them… We shall see.

Again – What an amazing orchestral rendition of the Opening theme. I couldn’t really showcase this until now, since it would serve as a terrific complement to the music box rendition Millerna comes across. It’s everything you love about Promises not Needed (with the exception of Maaya Sakamoto but that’s fine), and puts it all into an amazing instrumental track. I don’t really need to say much but… wow.