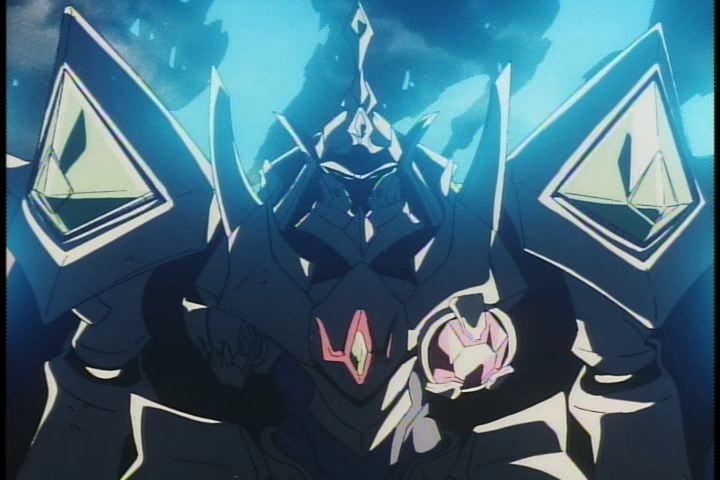 Well, best laid plans am I right? One minute you’re all “I’m gonna merge with Escaflowne and we’re gonna kick ass and be awesome n’ shit!” Next minute, your guymelef gets wrecked in a battle and somehow, despite not even getting wounded much, YOU suffer for it. You suffer so much that the only way to actually alleviate said suffering is to repair your guymelef’s body. That’s gonna be painful.

So much for a breather episode after that last one, instead we are reeling from an unanticipated event, but also being mired in Gaean lore. It is not just any Gaean lore mind you; it is lore about Escaflowne itself. In a situation rather reminiscent of when Millerna just happened to be on the same airship our heroes were on after Allen’s noble sacrifice to save Hitomi, an Asturian convoy they come across houses their key to Van’s salvation: Dryden Fassa. The son of the merchant who hung around the King of Asturia many episodes back, Dryden is a rather… interesting character. Like Millerna, it is hard to glean from his appearance on how much he will be liked down the line. Right off the bat the show reveals he’s not some playboy though, but a man who seems to live up to his hype in terms of wealth and intelligence.

In a clever info dump, he reveals the nature of what exactly is an Ispano guymelef, which helps bring to full clarity the asides his father made about it. Then when you thought you have seen everything, Dryden flips a switch and Escaflowne signals its makers from another dimension to come repair it. Convenient? You know it, but the world of Gaea is filled with such well-done mystery and wonder that it feels right at home. In a lesser show, this would be looked down upon. This makes the rather surprising request for money to repair Escaflowne all the more amusing, since for all their mystical customs and prestige, the Ispano still have to eat and maintain their giant downward-finger-shaped ship. The scene where they repair Escaflowne while meters away our heroes restrain a Van howling with pain as Hitomi and Merle watch helplessly is one of the most intense scenes in the show. Sure we know for a fact Van is going to live, but our heroes don’t, so the performances and animations must match what the scene demands of them, and they deliver it in spades. Thus, it makes their reactions to Van’s recovery all the more relieving to see.

However, they’re still in a position of general quarters. After Zaibach’s success in Freid, Dilandau seizes the opportunity to go after Van with his entire squad of Dragonslayers, seeking to end everything. Van, being the stubborn and noble soul he is, goes out alone to defend his friends. By far, the subsequent battle scene is the most brutal Escaflowne has ever been. Whereas before, Van was content to disable enemy guymelefs, he full on murders the entirety of Dilandau’s forces. Despite the caveats of what it means to be a pilot of an Ispano guymelef, Van pulls off a terrific scene showcasing how far he has come as the Escaflowne’s pilot. After what Dilandau has put everybody through, it seems only fitting to feel it’s time to finally put him to rest. Then… when you think things will get any crazier, the ghosts of the dead Dragonslayers come back from the grave to protect their leader, and in one last push, drags Van with them to perdition. This leads to the worst cliffhanger in all of animu.

How can you end an episode like that? More importantly, how can you end it in such an incredible fashion? I don’t think there has been any other animu cliffhanger that rivals the sheer edge of your seat intensity as this episode of Escaflowne. And as of right now? I don’t think there ever will be. All you just know is that you’re mad as hell that you have to wait for next week to see the conclusion, because that was too goddamn incredible and the show took that emotional high away from you.

Epistle – A lot of the reason why that last scene works (in fact, THE reason why it works) is this piece. As it begins, it immediately reaches for an ominous tone, then the chorus begins. The piece signifies whatever the event it is being played for is one of terror and dread. Then the strings happen, and alongside the chorus it begins to press forward, picking up speed, and sounds like its taking things down in its path. The piece then looks as if it is heralding the final blow. However, it does not. Instead it stops; there is a moment of quiet, a lull of unknown origin. Yet once it goes its way, and the music picks back up, you realize it wasn’t meant for introspection or peace, as the chorus bellows an ominous event has occurred. Then before you can even get your bearings and wonder what’s going to happen, it ends. It just… ends.