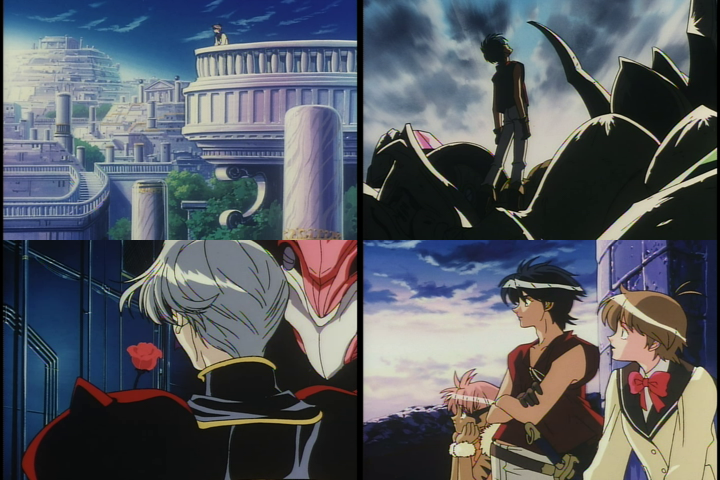 Now, we’ve come to the second act blues protagonists have at this juncture, which has unfortunately occurred during a breather portion of the story. Given the whirlwind series of revelations, deaths, near-deaths, and cliffhangers, it’s well deserved. Yet, Van for the first time is shaken of his confidence as a swordsman and coming to grips about the murder rampage he had last episode; Hitomi confesses her crush to Allen by accident; Allen is annoyed his father is being brought up again; and Millerna is trying to make do with a quite astute betrothed who notices her infatuation with Allen. It seems like a lot, but there is a lot of good foundation building and a lot of great callbacks, including some I’ve forgotten. Allen reminisces about his connection to Balgus (complete with flashback), and we see Millerna and Hitomi interacting once again after the former said to the latter they should try and get along a few episodes back.

It’s the best scene in the episode, given the events that had transpired. Even with all the growing up they did in Freid, Millerna and Hitomi are still young and inexperienced with the world. Yet, there is Millerna confiding in Hitomi about what she (or in her case ‘a friend’) should do in the case of picking between Baby Daddy (Allen) and Sugar Daddy (Dryden). Their conversation reveals a lot about their characters, and is helped perhaps by their status as commoner and princess. It is amusing to see Hitomi being not only concerned but playful in their interaction, much to Millerna’s chagrin. Ultimately, an offer for a tarot reading is torpedoed by an eavesdropping Merle, who is revealed to be a great judge of character in his brusque confrontation of Hitomi. Now Millerna knows she is into Allen, and Hitomi has to confront the idea if her ‘worry’ for Van is more than just that. What’s a girl to do?

The best PART of the episode though, is Merle. By and large she is the mover and the shaker, and the pillar of strength in the moments of peril. Whether it’s trying to motivate Hitomi by healthy smacks on her unconscious face, issuing an ultimatum to the girl on choosing Van or Allen, or facing off against lethal guymelefs who were about to capture Van, she is in the top of her game here. We already know how much she thinks the world of Van, and at his lowest point she continues to do so no matter what faces her. Overall, it’s pretty neat.

Then when you add the fact they’ll be researching more about the power of Atlantis, a couple of new catgirl Guymelef pilots who respond only to Folken, and an out of it Dilandau, you’ve set up a lot of intrigue for the second half of the show. Hopefully it is as good as I remembered it, and hopefully you will think the same too.

Deja Blue – Holy shit, they actually had a track for that music box melody of the opening a few episodes back? Holy shit. Here it is. It’s the opening played to a music box. It’s awesome go listen to it.