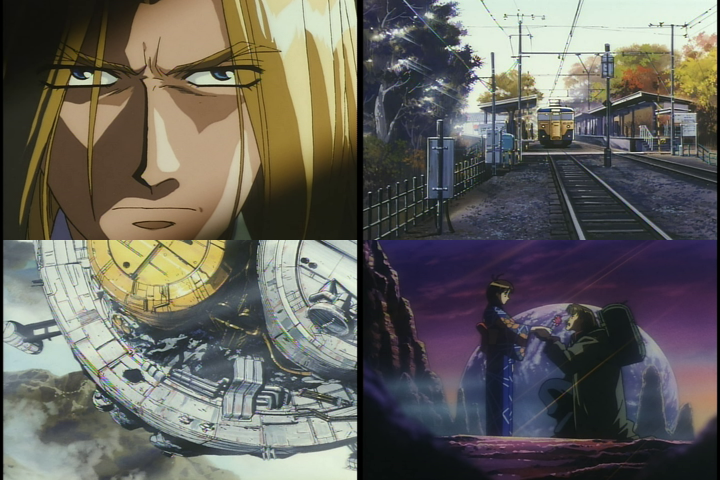 Seems legit. Before our heroes go to the Mystic Valley, where the formerly great Atlantis once resided, we have an entire episode inundated with lore from a very distinct individual: Allen’s father. The seeds planted as far back as Episode 5 (where we find that Allen has daddy issues) have now taken root. How this takes place is another great example of building from long ago laid foundations. Our first instance of Allen thinking about his dad once again is in Episode 14 when he thought to himself about how all these revelations remind him of ‘him’, then Dryden asked for his father’s journal the next episode, and now it is snowballing into a full on confrontation with Allen’s past. It’s a very natural progression, and the speed it acquires does not feel in the slightest bit shoehorned, since it ties so well into the plot.

It ties so well that Dryden’s expression of amusement on how all our heroes have a connection to the Mystic Valley and want to stick around to see it, seems like the writer’s cheeky way to admit the convenience (sound as it may be) of it all. It also serves a greater purpose by showing how Allen clashes with Dryden, the only other male in the group aside from Van. Whereas Van and Allen are diametrically opposed in terms of temperament as warriors, Allen and Dryden are opposed by ways of ambition and outlook. When it comes to exploration and confrontations with the past, Allen is reserved and hostile towards involving himself with it, while Dryden is eager and uninhibited. It’s a welcome new type of character dynamic, especially since they do not get along well at all. When Allen finally snaps and decides not to hear anymore, Dryden is rather uncaring towards how he feels and lets him go on his merry way. Seems very uncouth, but it shows Dryden is not the kind of man who backs down just because somebody is uncomfortable with whatever he is doing. The results of their different lifestyles and parental influence show here, Allen is dutiful because of his absent father, while Dryden wishes to be free from being tethered to his status as a merchant’s son. Non-romantic conflict, I love it.

The flashbacks that come with his narration are, like the ones in Episode 9, welcome to the story, and also shed welcome light on Allen. We now see a potential rationale on his perpetual dutifulness, as well as show the frowned upon things his father did. Then it gets even more interesting. That random CD Hitomi found in Episode 6? It is not just random items from Earth that came before Hitomi, but also people. Turns out Allen’s father had a chance encounter with Hitomi’s grandmother. Fortunately, their encounter is a chaste affair and brief as we see them part in a way similar to how Hitomi and Amano parted in the first episode. Given Dryden’s opining of how fate connects all of them, it is a good visual example of it coming to pass even in the… past.

We finally come back to the real world as well, with Amano and Yukari speaking to Hitomi’s mother. I’m curious how many days or months have passed since she disappeared, and am left to wonder if we would have seen more of it had Escaflowne been more than 26 episodes. However pondering that is meaningless here not just because we will never know, but also because the show doesn’t suffer from it. Given the tethering of fates and how she has come across the similar experiences of two generations of Kanzaki ladies, Hitomi’s mom takes her daughter’s disappearance very well. Seems a bit convenient, but it does allow the show to narrow the concern party down to the essential Gaean troupe. If it’s working well, don’t try to tamper with it or whatever.

And boy does not doing that work in the show’s favour as all these revelations about the past converge into a rather sudden and welcome climax, where our heroes are whisked away to the Mystic Valley. Exciting I know.

Farewell – I couldn’t help but feature this here due to my surprise of its sudden reuse here after a couple of episodes ago. It is a serene if sad piece, and was used on Episode 14 where Dryden uncovers the button to signal the Ispano and repair Escaflowne, as well as when Hitomi tries to comfort Allen when he stormed out of Dryden’s journal reading. The track does fit the title of the piece, but somehow it manages in those two instances to convey hope and longing for more improved times. For some reason I find it a track I seem to underrate when I think about the Escaflowne OST. I hope my feature of it here helps to rectify that mistake.