Legend of the Galactic Heroes: Die Neue These Episode 39 Review 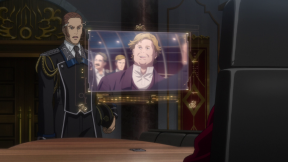 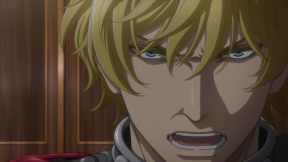 Synopsis: Reinhard receives a report of the arrival of Alfred von Landsberg and Leopold Schumacher on Odin. Hilda surmises its for a kidnapping plot, mostly likely involving the young Kaiser, Erwin Josef II. Upon his request to secure her property, Hilda visits his sister Annerose to get her permission. Annerose is reluctant, but is eventually persuaded to take on security. Reinhard has the Phezzani commissioner to the Empire come to his office, where he cuts through the bureaucrat's doublespeak and makes him admit to the plot at hand, which will give Reinhard cassus belli regarding the FPA. Reinhard demands Imperial passage through the Phezzan Corridor to achieve his goal. 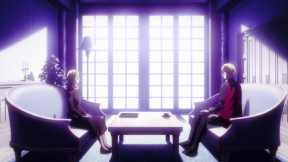 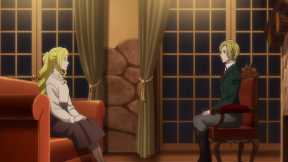 We get some more set up for the next major event and battles in this episode, making it a pretty low key entry, but still having some interesting elements to it. I especially enjoy seeing the full range of Reinhard's emotions in this episode, wonderfully pronounced by Mamoru Miyano (and hopefully just as well performed by Aaron Dismuke later).

We officially start the adaptation of the fourth Legend of the Galactic Heroes book, Strategem, in this episode. We get the entirety of Chapter 1 here, from Kesler's report to Reinhard about the arrival of the two former Lippstadt acolytes, to Reinhard and Hilda speculating on the reasons for their coming to Odin, to Hilda's meeting with Annerose, to Reinhard's meeting with Nicholas Boltic. It's pretty straightforward, with no real frills, in its adaptation.

I think my favorite scene in this episode is when Reinhard waxes poetic about how Rudolf von Goldenbaum was said to speak like thunder, but that thunder is ultimately a waste of energy. This comes off his and Hilda's figuring that Landsberg and Schumacher would likely kidanap the child Emperor. We can only guess what it meant to that moment, besides being a beautifully insightful comment. He goes onto say that he will not be like that, like Rudolf, who was so much wasted violence. This probably extends to his feelings about plots being hatched behind the scenes and how he plans to approach them, carefully, perhaps to see if the plots can be useful to him, instead of just lashing out at them.

In many ways, Annerose is the one who set the current history in motion, albeit not intentionally. It was when the previous Kaiser took her as a concubine that Reinhard set off in his path. Without the conviction to free his sister, Reinhard would have never risen to the level he is currently at, at this point in the story. Hilda's reverence for the woman is almost as high as his own. And hey, young Konrad Modell from ep 20 is one of Annerose's attendants! Remember Konrad Modell? No? Well, I do. I'm glad to see he's doing well after the nightmare that was the war with the nobles. I'm sure Annerose treats him well.

My other favorite part of this episode is Reinhard's utter dissection of Boltik. Obviously, the Phezzani representative would prefer to couch his words and speak in hypotheticals, but Reinhard was clearly not in the mood for it. He gleefully toys with Boltik, making it clear he knows what he's up to and demanding to know where it's leading, before finally approving it with a caveat that's a hard pill to swallow: passage through the Phezzan Corridor, which the Phezzani have protected fiercely as their great trade route. If Rubinsky wants to play a game, Reinhard is demanding he go all the way.

We may see the plot sprung into action in the next episode, plus a bit of Oberstein. I'm hoping we get the entire second chapter and maybe even some of the third. 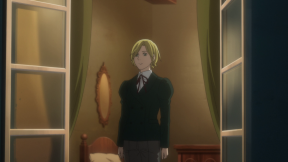 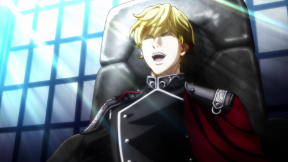