Legend of the Galactic Heroes: Die Neue These Episode 41 Review 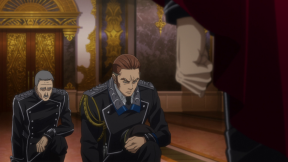 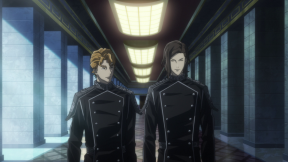 Synopsis: Reinhard announces the abduction of the Emperor to his subordinates. They speculate about the possible interference of the Free Planets Alliance. Alone with Mittermeyer, Reuenthal wonders aloud who had the most to gain from the Emperor's kidnapping. Hildegard confronts Reinhard with her suspicion that he let Vice Admiral Molt take the blame for the Phezzani plot, just as it is announced that Molt has committed suicide. On Phezzan, Rupert Kesserling reports to Rubinsky about Boltik's weakness in the negotiation with Reinhard, but Rubinsky shows little concern. Later on, Kesserling plots with Dominique Saint-Pierré about supplanting his father. 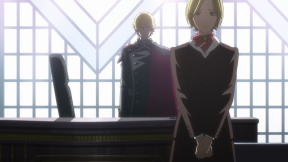 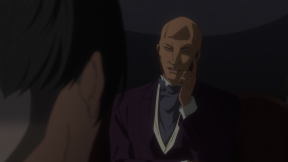 The plot gets a little thicker in this episode, as in the aftermath of Erwin Josef's abduction, both Reinhard and Rupert Kesserling are hatching plans. Poor Vice Admiral Molt takes his own life to retain some honor in his failure, Erwin Josef acts up while in transport to the Alliance, and Remscheid gets ahead of himself. There's quite a bit going on, even though this is a transition episode.

With the exception of some chronological differences in events, the episode is a fairly straightforward adaptation of Chapter 3 of the fourth Legend of the Galactic Heroes book. We have the same basic events: Kesler is forgiven for the blunder of the Emperor's abduction (as he was set up for this failure) while Mort is set to be punished and kills himself before he can be, Hilda confronts Reinhard over this, Reinhard reports to his subordinates that the Emperor's been taken, Reunthal and Mittermeyer have a conversation about the situation (this is expanded in this episode), Kesserling has a conversation with Rubinsky, Kesserling talks with Count Remscheid about establishing a government-in-exile, Kesserling commiserates with Dominique, Erwin Josef II acts up in transport. All of this happens in both the chapter and the episode, though not necessarily in that order.

One of my favorite moments of this episode is in Reinhard addressing his admirals about the Emperor's kidnapping. He says, "There was a minor incident at Neue Sanssouci tonight. Someone kidnapped a seven-year-old boy." Every one of his subordinates immediately realizes what he means, but more than that, this shows Reinhard's utter contempt for the Goldenbaum legacy. Previously, he decided he would make the throne a toy for a baby, now he employs an understatement that puts the Emperor down to a simple seven-year-old boy. At every turn, he has shown nothing but disrespect for the former glory of the Goldenbaum Dynasty. And yet, he will use the excuse of the Emperor's abduction to justify his going to war with the Alliance.

One of the hypocrisies of Reinhard's is his treatment of Vice Admiral Molt. As Oberstein had suggested to him, he was set to make a sacrificial lamb of the man as the result of the "failure" to secure the Emperor, a failure that was set up by Reinhard himself. Molt, an old-fashioned military man with a sense of pride in duty takes his own life rather than live with the shame of punishment for failing, whether it be failing to protect the Emperor for the Emperor's sake, the Goldenbaum Dynasty's sake, or merely failing Reinhard. In the end, it doesn't matter, because he dies all the same, and Hidegard isn't happy about this sacrifice. She confronts Reinhard about it, who insists he's not dancing to Phezzan's tune, that they're dancing to his, but at this point the two parties are trying to see who can outmaneuver the other.

Rupert Kesserling is seeing his father's lover, Dominique, and channeling his own ambitions as he plots with her to control Bishop Degsby and supplant his father as leader of Phezzan. However, I wouldn't count out Rubinsky in this if I were the viewer. The Black Fox of Phezzan is nothing if not careful and calculating. Dominique is a very minor character now, but she becomes a little more involved later on. Somehow, this adaptation makes her out to be a bit more diabolical-seeming, more conniving and two-timing, somehow. In the OVA, it always appeared that it was a fool's game to count on her to take anyone's side but her own, but here it seems more like she's honestly luring Rupert into a false sense of security.

Anyway, another solid episode. Next time we should finally, FINALLY get to see Yang and the gang again. Hopefully. 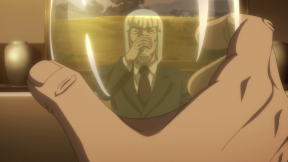 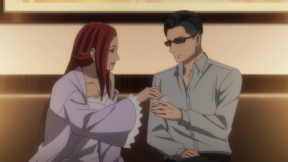