The Gurren Lagann dub premiered for the first time on Sci-Fi tonight... 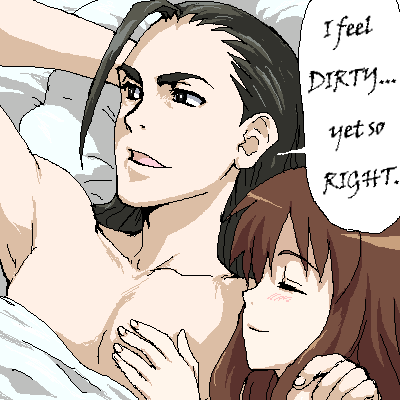 The short and simple of it? It's not so bad.

So dub's often get a bad rap, often for good reason. With much anticipation Gurren Lagann fans with little or nothing to do sat around and watched the premiere of the first two dubbed episodes on the Sci-Fi Channel. And boy, what a commercially studded event that was (more on that to come, trust me (fucking Sci-Fi)).

For those unfamiliar with the show, you're way behind the times. You can read up on Gurren Lagann here and check out a ton of Gurren Lagann images (including the cut Eye Catches) here. Unfortunately this is set to hit as big as Evangelion, and be ruined by a shitty fan base shortly there after.

With regards to the dub, four main characters were introduced in the first two episodes, Kamina, Simon, Yoko, and Leeron.

Kamina, the most manly and hot blooded, sounds pretty awful at first. His voice doesn't seem to live up to his hot blooded Japanese counterpart. It comes off a lot more weak and immature. I think overtime his voice will grow on people. Lucky for us though it won't be a big issue after a while. To quote Sam Roberts, "foreshadowing!"

Yoko and Simon came off fairly well. Yoko fit right off the bat and I think Simon's VA will grow into the role just fine. The consensus seems to indicate that Simon's yell is the most appropriate, something that'll be reoccurring a lot in the future.

Hands down though, the best voice belong to Leeron. Oddly enough, played by Steve Blum...

Steve, best known for his role as Cowboy Bebop's Spike Spiegel and lead roles in, well, just about everything else, somehow fits perfectly. The main point of Leeron is to make you shift uncomfortably in your seat for the duration. Something Steve manages to pull off extremely well.

Friend & contributor Penguin Truth had this to say about the dub thus far,

Having only seen one episode with the original cast, I don't have much to go on, but the dub cast does seem to suit most of the characters, at least. I seem to recall Kamina with a more enthusiastic, booming voice, so while Hebert does a relatively good job depicting some of his more muted (if you can call anything Kamina does "muted) conversations. Michelle Ruff always delivers no matter what role she's placed in, so as Yoko she doesn't disappoint. Simon is the best voice, though, a rare gem from Yuri Lowenthal. I was blown away by Steven Blum's Leeron— I have no reference from the Japanese version, but really, can anything be that good? Overall, a decent effort so far.

In the end the most aggravating thing about the dub itself (not including the circumstances under which it aired) was how they continued to pronounce Simon as Simone/Sighmoan/Semen. Look, just because it's pronounced a different way in Japanese, doesn't mean it can't be pronounced correctly when said by those of us who can speak English without impediment.

At the very least it's not as bad as Eureka Seven's pronunciation of Eureka... arg

Yet, in the end, only time will tell how things play out. Major characters have yet to reveal themselves. Their voices waiting to either cause disappointment, acceptance, or downright rage. Until then all of the original fans can do is prepare themselves for the swarms of twinks who stand ready to pronounce Gurren Lagann as the greatest thing Dragonball Z.

Update 01:
If you're interested, you can watch the first episode online here www.scifi.com/anime/. (imho the second episode is better representation of the dub, action, and animation yet to come)