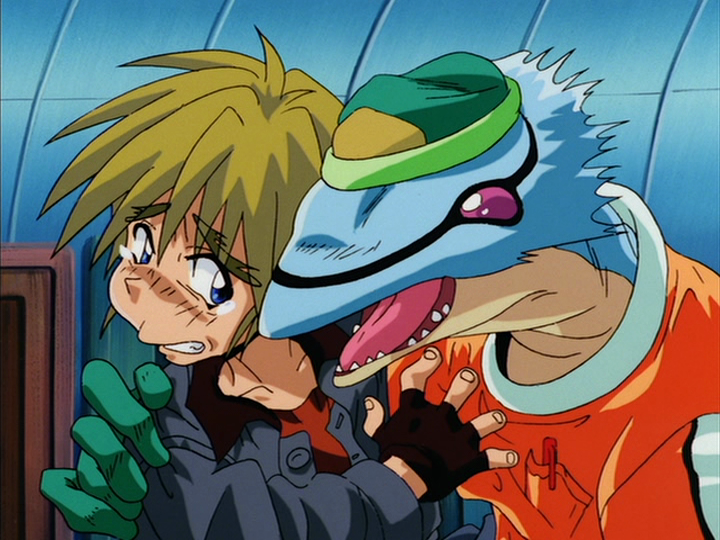 I told you I’d be back. Also, I have noticed Jim has yet to make an appearance on the feature shot of an episode. So here I am remedying more matters. Then again, covering this series is in and of itself a remedy of mistakes long made in the past. Mistakes I, once again say, hope to fix.

Anyway, FILLER! Not just any filler, ENJOYABLE FILLER! After some Space Race adventures, we’re now privy to the inner workings of the Heifong branch of Starwind and Hawking Enterprises. However, like Sentinel and elsewhere, they’re not doing so hot. Gene is still dismissive about any job coming his way; Jim still harps on him to find anything (although he’ll draw the line on certain recommendations he finds questionable); Melfina’s just happy to be there; Aisha’s a go getter; and Suzuka must be so well-off from her job she can loiter around their HQ for lord knows whatever reason.  They’re all at their peak when it comes to how they act when they aren’t pegged for death.

It also helps that the episode is unlike the last one, which spent a bit too much time on Gene being a layabout and Jim not tolerating it. Instead, this episode is a cute little convergence tale, where our characters go their separate ways but somehow what one group is doing is related to what another one is doing, and then we get a big cluster of a climax. This time, it’s about bugs and cacti. Aisha is hired by the Heifong public sector to kill a creature in the sewers, Jim and Melfina take up a job from Fred Luo about a missing alien, and Gene goes on a date with a lady who helped him apply for the Space Race. There’re no shocking revelations about certain aspects of their character, yet it’s nice to see them like they are in this episode. I know for certain such hijinks will not last forever, so it’s good for the show to make use of the main cast for some divergent fun.

Add in an amusing twist at the end based on the true identity of the instigator of all these hijinks, plus its amusingly dark end with Melfina stomping him to death, and you’ve got a pretty entertaining breather episode. I could’ve sworn I’ve also seen this episode, but I don’t remember being as amused about it as I am now.

This is a good sign, especially at the halfway mark.