I wish this was the interior art.

Jace and Babs hug, Harper works out bugs, and Gordon knocks out thugs, all in this nineteenth installment in DC's weekly Batman shindig. The artwork is all over the place, the "hypnotized ally you have to convince you're not who they think you are" cliche is eye-rolling, as is Jason's Babs wank, and honestly I want them to get rid of this supernatural element, too, even if it means even less Batman in the book, because unlike Bats, I don't care about Croc's missing cult followers. But hey, Jimmy kicked some ass in Blackgate, and that was the highlight of this entire story arc so far, even if it was just one page. Still, I preferred Scott Snyder and Gerry Duggan's
Batman #34. By a lot.

Let's talk about something I usually only mention in passing: the artwork. I always hesitate to speak on the subject of artwork on any detailed basis, because, honestly, I don't have a trained eye for drawing and inking, and most of what I say usually boils down to, "I just don't like the look of it" without being especially helpful in describing why. It's one of my biggest failures as a writer. But I'll venture a try. I get what Emanuel Simeoni is doing with a lot of the line work, by emphasizing a kind of dirtiness and shadow to everything, which allows the reader to be mystified and maybe a little scared by the ominous events unfolding. But half the time faces look like wet, crumpled up paper bags or burn victims, and the anatomy of the characters and the detail is wildly inconsistent from page to page. And sometimes the art is almost entirely different in a few panels, as if somebody else entirely drew them. Simeoni is good at the terror of Joker's face (a Babs hallucination) and the blood on the hand of the hooded man in the catacombs, but in many pages things look really awkward and lazily done. It's very distracting.

This will never be okay, DC.

Oh look, it's the "Oh no, our ally has been hypnotized into thinking we're their well-known enemies" routine. I'm sure Babs must've also been hypnotized not to notice that her archenemies are talking to her so familiarly, can actually fight really well physically (something neither Joker nor James Jr is known for), and that "Joker" isn't laughing at all. Just like somebody must've hypnotized me not to remember that Scott Snyder had a hand in this absurdly cliched sequence where Jason has to talk about how fucking awesome Babs is (AGAIN) and tell her how important his first meeting with her was. Oh yeah, and did you know that Barbara Gordon has photographic memory, like Batman? Because that's a thing now, I guess! It's never come up, but whatever! Yay, Batman Eternal! Does next issue begin with Jason splooging all over Barbara's cape?

"I always remember when I spread my STDs..."

In keeping with Batman Eternal's mission to introduce terrible one-off villains who will never be of any significance because no thought was put into them whatsoever, we have a bit more of Dr. Falserio, who I just realized must be that guy who had his face changed to look like the Brazillian soap star (though he doesn't, but who knows with the art from the issue with the actor and the art from these past two issues), which is why Barbara thought it was the soap guy when scanning the subway crowd footage. Well Batwoman, a character nobody has cared about since 2006, but somehow gets more respect than Tim Drake, has special lenses that frankly pretty much everyone in the Bat family should have by now that prevent her from being a victim of Falsario's hyno-implants. So she is about to beat him down, but small impoverished children who must be weak from hunger are able to hold her back very easily and he escapes. What a waste of ink Batwoman is.

Batman, Killer Croc, and Jason Bard pretty much just dick around underground in this issue, so it's almost like Batman's not in the issue despite actually being in it. I'm sick to the teeth with this awful, awful supernatural storyline, it's taking up too much space. But I guess it could be worse, we could be back with Batwing and Non-Spectre. Croc's got something interesting taste in decor, at least.

A go-go cage for a disco designed by Tim Burton.

Looks like things are finally exploding in Blackgate between Falcone's faction and Penguins', and for some reason the prison guards at the most maximum security prison in a city filled with violent sociopaths are entirely unprepared to handle even non-powered gangsters without any real weapons, so Jimbo has to give it a go. Imagine Bryan Cranston as Gordon, saying the line, "Some of the other cops and I had a term for it. The Windy City Special." That'll grow hair on your chest. 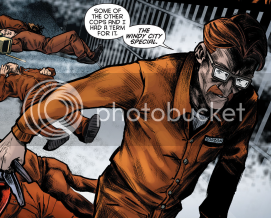 "The Gotham City Special" is something like a Dusty Pinkie, and that's not very helpful in prison... or is it?

Oh, also Harper is the super best at everything and totally not a special snowflake pet character because bleh, grrl power. Sorry, Harper, but it's getting harder to defend you as a character when the writers won't use you as one. This, "BUT SHE'S AN AMATEUR!" "I'M READY!" "NO YOU'RE NOT!" "SHE IS!" bullshit is just the same thing every member of the Bat family goes through before joining. Maybe one time (aside from Dick), one of them should just say, "Yeah, sure, okay, suit up" to the nearest waif with a fight in them. Stop being predictable. And stop making Harper look like she can do everything, especially at the denigration of Tim Drake. I like her, but I like Tim, too. He's had it bad enough in other comics, don't screw him over in this, too.

That was my reaction, too, Tim. But I'd still give her the d---ow, who hit me? I meant I'd give her the Dick Grayson training manual!
(And then I'd fuck her.)

So, yeah, outside of Jim Gordon... this issue was pretty horrible. Maybe things will get better next issue.