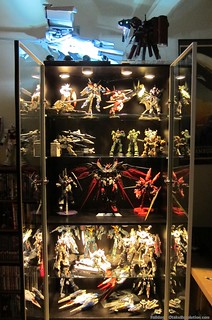 For me, and I imagine many other model collectors, the biggest enemy of a completed project is dust. Nothing like checking out your collection to find everything is coated in a nice layer of grey. THis is why for the longest time I’ve been thinking about getting a glass enclosure for my Gunpla models. Something nice to display them in while protecting them from the unavoidable everyday dust. Living in an apartment and putting together a full blown, wall long, built in display cabinet is out of the question (someday I will have one, damn it!).
Instead I started looking at curio cabinets, Pulaski being one of the largest and most respected manufactures. They make some great cabinets but there were two issues, the size and the cost. A good sized cabinet would not only take up too much wall space for me but cost me upwards of $1600. They’re also a lot more showy then I prefer. I tend to prefer clean lines and many Pulaski curio cabinets are better suited to stand alone in the middle of a classic dining room then a simple/mish-mashed place such as my own. Though well designed they also feature unnecessary additions (which also raise the price) such as specialized doors and a mirror back. All around they're fantastic but more than I need and more than I want to spend right now.

Professional class display cabinets, like the ones you find in a retail store, tend to cost even more. Maybe I’m just not looking in the right place but retail on the size I was looking for started at $2000 and went up. I could possibly find a used one if I looked long enough but then I’d also have to deal with the more difficult situation of sourcing transportation for such a large, pre-built piece. Not to mention trying to fit a retail designed piece into my apartment. Eventually, after many a Google search, I found what I was looking for.

IKEA has various doors for their Billy line of bookshelves. Some are more traditional with a thicker border but their Morebo doors just have a thin aluminum trim. You wouldn’t be able to tell it from their site but the door is clear with an optional inlay for pictures, designs, whatnot. Even better you can get a Billy bookshelf with a 15” depth in addition to the traditional 11” ones. Throw in some cheap glass shelves and you’ve got a great case, cheap.

I also wanted to get some lighting for the cabinet. If I’m going to this much trouble over my old traditional bookshelves I might as well try and add a bit more style to it. There are a lot of options for cabinet lighting out there and after some research decided to go with modern LED over the old halogen lights. Not only do they run cooler but LEDs tend to have a longer runtime. LED strips would’ve been cheaper to implement but in the end I decided to go with directable puck lighting. The best ones I found were the painfully overpriced Inreda lights, also from IKEA. I started with a battery operated set from RiteLite but they produced to cool of a light (in while LED terms, it was too blue, see the top of the cabinet in the photos and you'll understand) but the Inreda lights plug into a wall outlet, can be strung together, and produce a warmer, more natural light.

A bit more expensive than a prebuilt display cabinet from IKEA, such as this one, but way cheaper than one from Pulaski. Throw in transportation, weather stripping (I'll get to that later), and along with tax I paid around $400. You can do cheaper if you watch Craigslist for used Billy bookcases. Someone in my area was selling some for only $35 but I had to pass because they were the 11" deep model.

Construction was fairly simple. Billy bookcases go together quite easily even if you have to reference the intentionally vague instruction manual supplied by IKEA. The doors were a bit more tricky in that the brackets have to snap into place. They require more pressure then I felt comfortable applying on $50 worth of freshly purchased glass. Once I figured them out though the rest was a breeze.

The hardest part was mounting the lights. IKEA's particle board is surprisingly dense and the little screws supplied with the lights pretty inferior. Normally one should just be able to drill the mount into wood directly but with these I had to mark my desired location, start a pilot hole, then come back and screw in the mount afterward. I doubt any part of the process could be done without the aid of an electric screwdrivers. Most of the wires are hid in the back but I have some bound and hanging down the side. The switch is actually tapped under the counter space to the right for easy and concealed access. Unfortunately my method of hanging it there, duct tape, is pretty awful and parts of it keep falling. I don't know why people love duct tape so much, frankly, it sucks horse dick. (Someone told me that it's because I'm using bad duct tape but if you can't trust Duck Brand who can you trust?) Also not working out so well is the black electrical tape I used to conceal the lines coming from the lights. It looks okay, better when the lights aren't on, but seems to enjoy falling down a bit too. It's fucking tape. It's job is to just stick somewhere. That it can't surpass the force of it's own weight against gravity makes me sad inside.

While IKEA is generally known for their cheapness but I'm pretty surprised by this bookshelf. It's fairly sturdy even with the weight of the glass doors. The doors are pretty solid themselves too. The one issue is the large gap between the doors, 5/16" at the top at 6/16" at the bottom. Luckily a bit of black weather seal filled it in quite nicely helping make the cabinet a bit more dust-tight. Unfortunately there's still a gap along the sides that would I will try to seal eventually if I find something of the right thickness.

If my math is correct I have about 2621 square inches worth of real estate in this display case. The bottom shelf I'm going to use for in-progress/snap-built kits until I get around to finishing them. Sadly I hoped to have more room in this case but I think trying to stuff more in would be a bit much. The majority of my Perfect Grade kits will have to stay outside along with some others on Action Bases who are too tall for the other shelves. In addition to the large PG Strike Freedom I'm trying to leave room for an upcoming PG 00 Raiser project.

Now that I've spewed all the details and little bits of info from this recent project I hope to hear others are inspired to do something special for their collection as well. IKEA does make smaller bookshelves (half the size vertically or half the size horizontally) to fit most homes. If you do follow in my footsteps please let me know how things turn out. I think I covered every little thought of importance but please ask if there's anything I might be able to help answer for you.

Below you'll find a few more pictures a bit of detail on how I've laid out my display. Thanks for reading! 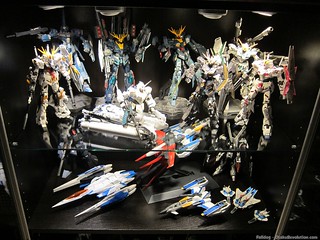 With this case I finally have room to place most of my MG Unicorn kits on one shelf. While there's room for my MG ReZEL I don't have any to place the Sinanju or Delta Plus along with them. Nor will I have room for a planned second MG ReZEL...

Below it sits the two PG Skygraspers, a Rick-Dias, a Full Cloth Crossbone, and several V Gundam core fighters. The 00 Raiser is there temprorarily as well. 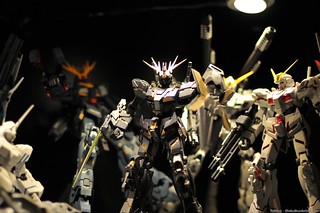 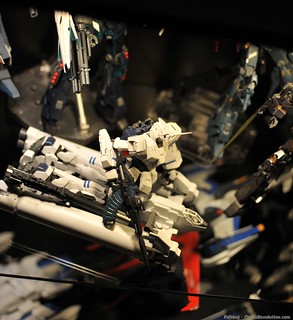 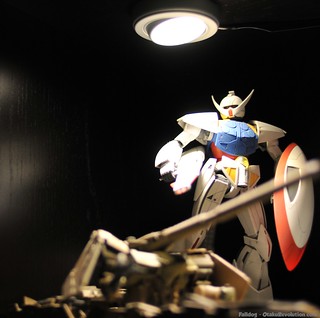 Above Turn-A you can see one of the LED lights and the cable running back behind it. I could have drilled upward to the top of the cabinet to better hide the cables but decided not to on account of the kits going on top and that I would have to drill out the back anyway for the second set of lights halfway down the cabinet.

What's great is that I can point the lights in different directions as needed. It's not as pinpoint as a traditional spotlight but it allows me to focus a bit more depending on how it layout kits in the cabinet. 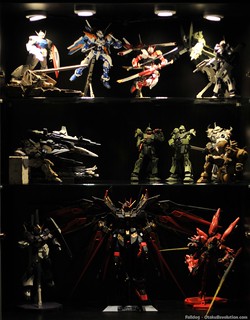 The top half of the cabinet, placement wise, is still a work in progress. As I mentioned before I'd like to make room for a PG 00 Raiser but only the third shelf is tall enough for that height and the only one cable to take the Sinanju and MG Nu. Above it I have my Delta Plus, Hildolfr, two of the Nemos from my Zombie Nemo project, the Soviet inspired Gouf and AGE-1 Titus. Eventually I think I'm going to place a Hardgraph tank. 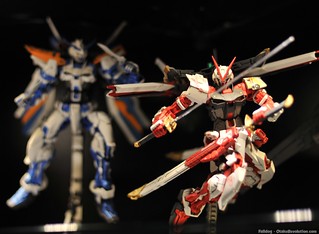 Above it my Ez-8 (which will proably be pulled out as soon as I need that space) along with Turn-A, Blue & Red Frame Astrays, GN-X, and my purple Nemo. As you can see the light diminishes as you get further down because of the kits in the way but it looks better in person than in these crappy photos. In some areas, like on the Delta Plus, the shadows cast actually look really cool. Here's a better picture of that third shelf, 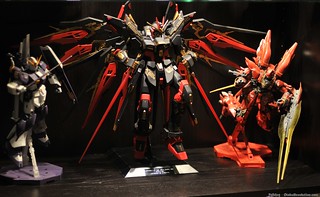 On the very top of the cabinet I have the a 1/144 Dendrobium and the Samurai 7 Benigumo kit. Right now I have those battery powered LED lights on top just for fun. You can see how how the light they give off is considerably cooler in the spectrum than the in-case lights. Of course the Dendrobium is going to get covered in dust but I don't mind too much as it'll probably be a long time before I get around to giving it a full paint job.