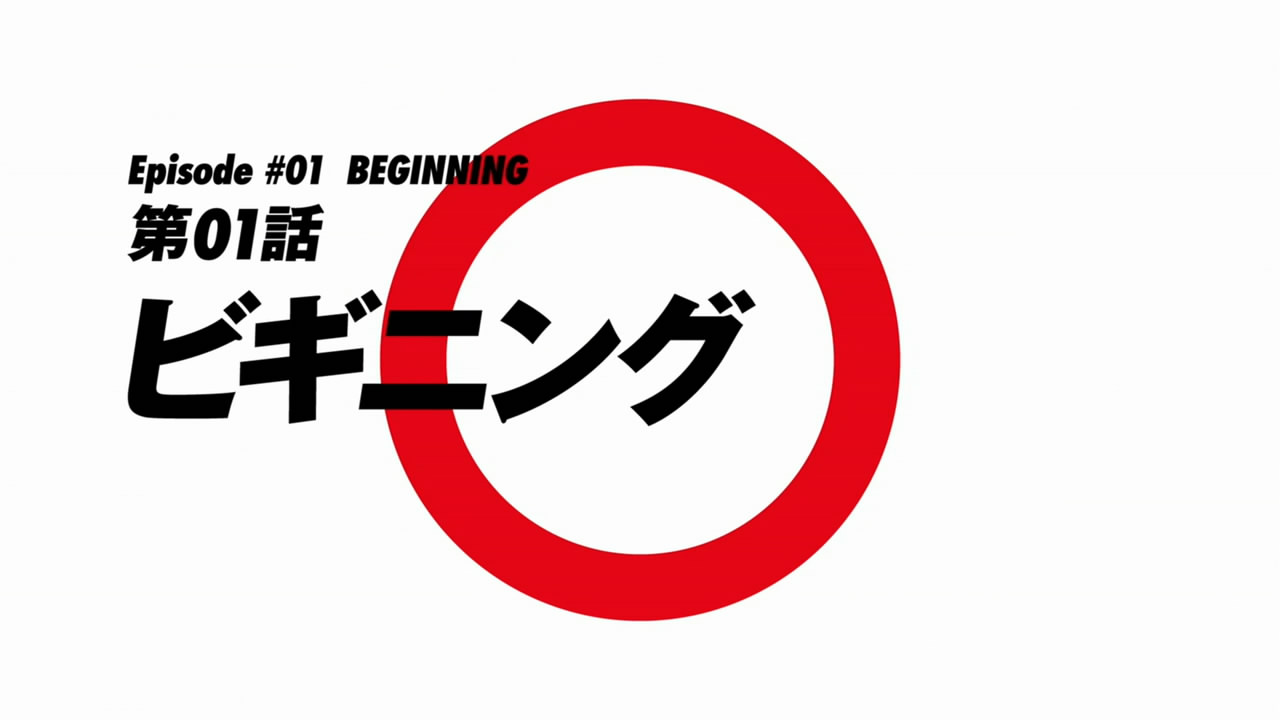 Episode 01 - "Beginning" Spoilers Ahead Summary: The first episode of the new anime series produced by BONES. The project staff includes Stan Lee (of American comic fame) and some staffers who worked on Cowboy Bebop and Eureka Seven. The story takes place in western America (California presumably), following a kid named Joey Jones. Joey is a hard worker and good student, working part time to support himself and his grandma. From what we can tell from the first episode is that both of his parents are dead. 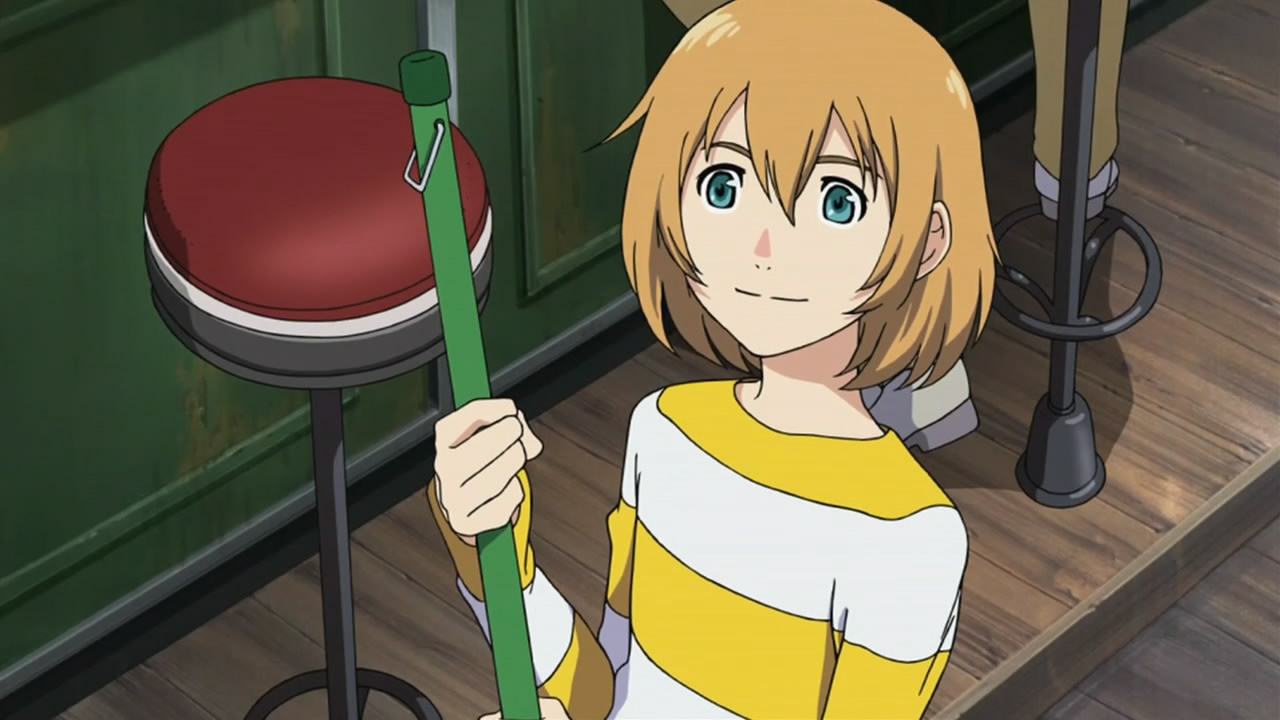 The show starts out with Matthew Denton (a scientist) who finally makes contacts with aliens. What he doesn't know is that these aliens are ugly and out to take over any intelligent life forms. Promptly the aliens set off to Earth to kill all of humanity. The scene shifts to introduce the main character, Joey Jones and his interest in mecha. Shown through a TV commercial is the latest model/toy known as Heybo. Joey obviously can't afford such a thing. So Joey heads off to school and is approached by rich blonde girl cheerleader Lina. Lina's older brother Will approaches and tells Joey to back off and stay away from her. Will grabs Lina and pins Joey up against the fence. Joey is saved by Psy, a tan kid with crazy hair, knee brace/cast, and crutches. 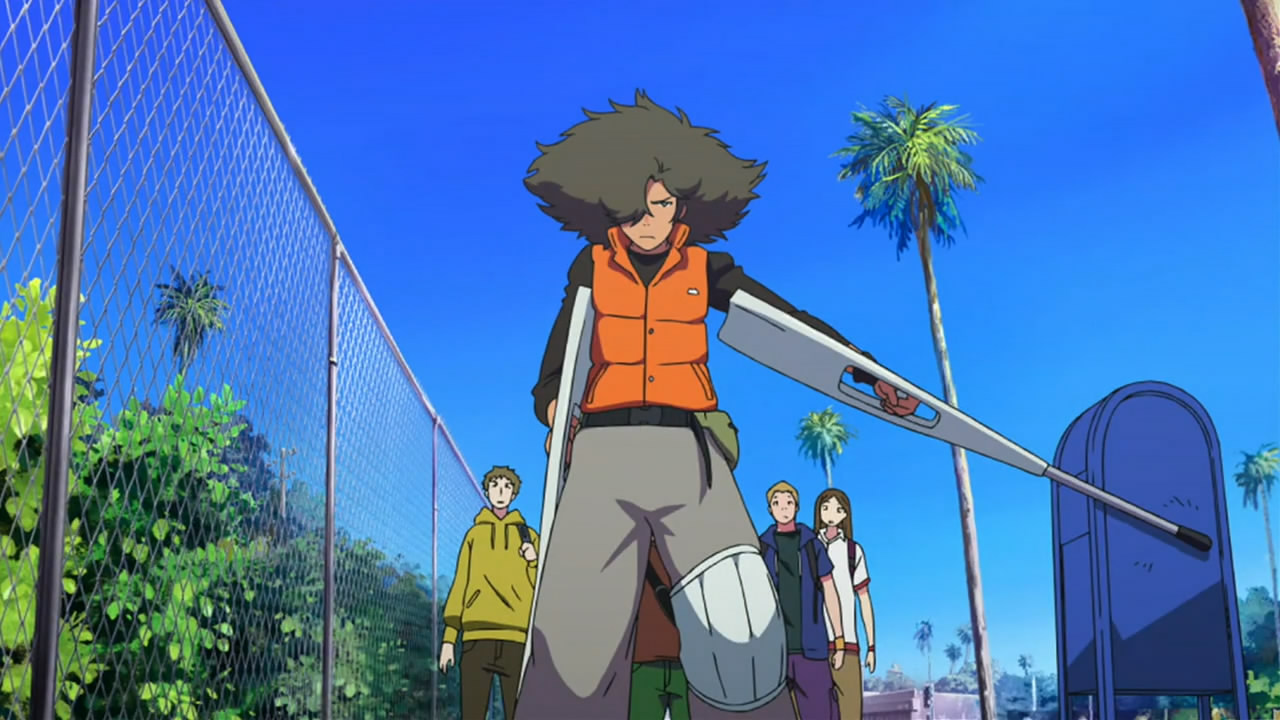 Switch to in class where Joey is sketching an image of Heybo. Not much really happens in class. Once class lets out, Joey goes to Professor Denton's place to drop off some odds and ends Denton had asked Joey to pick up for him. Denton is beyond excited because he finally made contact with the aliens. Before Denton can even finish, Joey is out the door. As Psy and Joey are walking home they witness Will and his friends playing with the latest Heybo mech; the group of friends fight over it and it ends up getting run over by a car. The kid who owns it, Nick, throws it in the trash and says that his parents will just buy him a new one. Well it must be Joey's lucky day because he picks up the Heybo out of the trash and sets off to fix it up. 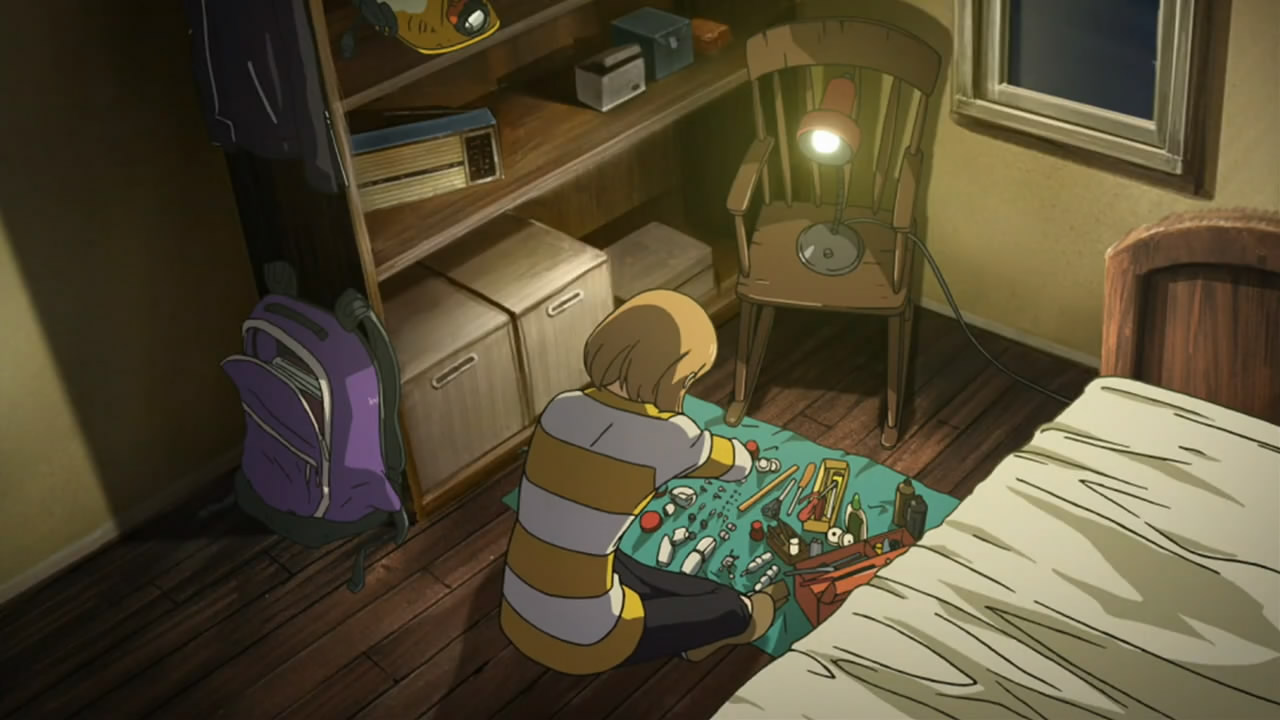 Once Joey finished the repairs, he names the robot Heroman. As the aliens' ship arrives outside of Earth's atmosphere, a red ring hits the atmosphere above Joey's town, quickly brewing up a thunderstorm. While at work the rain starts, Joey runs off realizing he left Heroman directly under an open window at home. It appears that Joey is too late, Heroman is drenched. Suddenly a lightning bolt crashes down and hits Heroman. The remote that controls Heybo's suddenly lights up and surrounds Joey's left arm, creating a pseudo-arm-remote with a single button. Joey presses the button and Heroman is awoken! 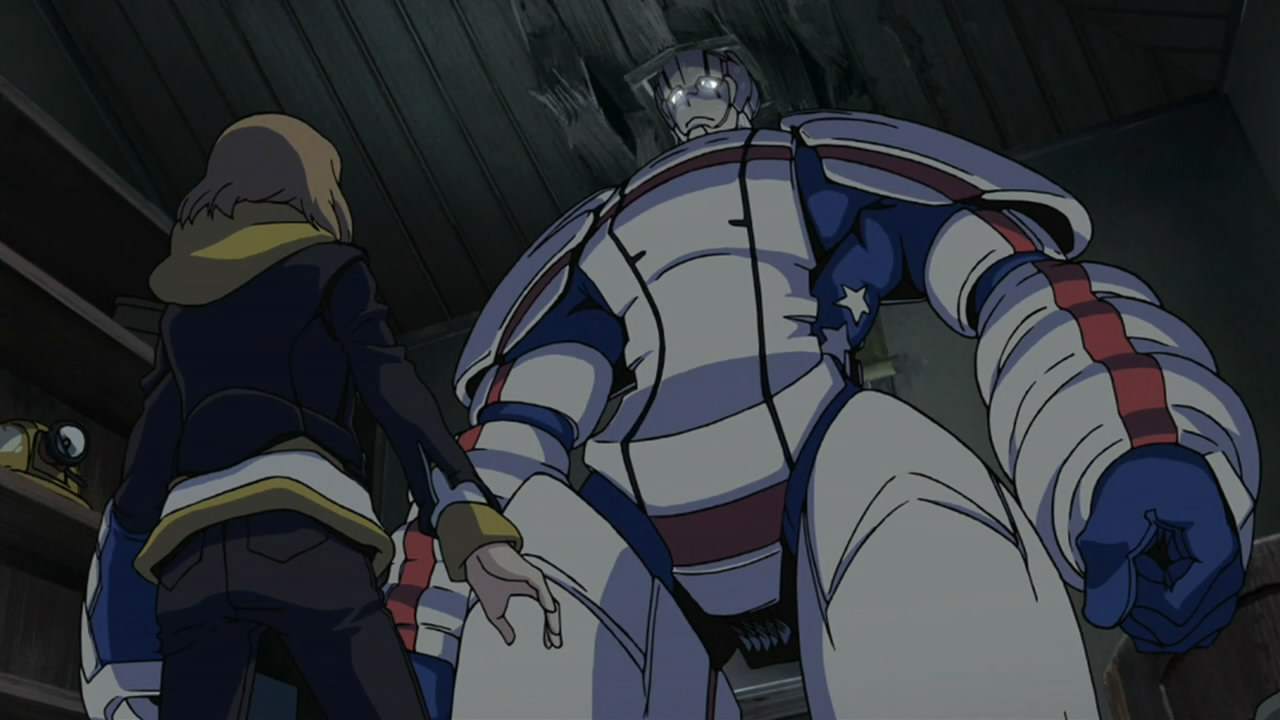 He grows full size, and the scene shifts to a car accident involving Lina and her father, creating a large fiery explosion on a nearby bridge. Heroman grabs Joey and sprints to the bridge in order to see what has happened and save any survivors. Joey immediately realizes that it is Lina's car, and activates what looks like Heroman's combat abilities. While Heroman is opening the car from the roof, another explosion happens. Joey is protected by his arm which created a blue shield. Heroman walks out of the flames with both Lina and her father, safe and sound. The first episode ends with the aliens directly above Earth, obviously ready to invade. In the preview for the next episode, it is revealed the aliens are known as Skrugg. 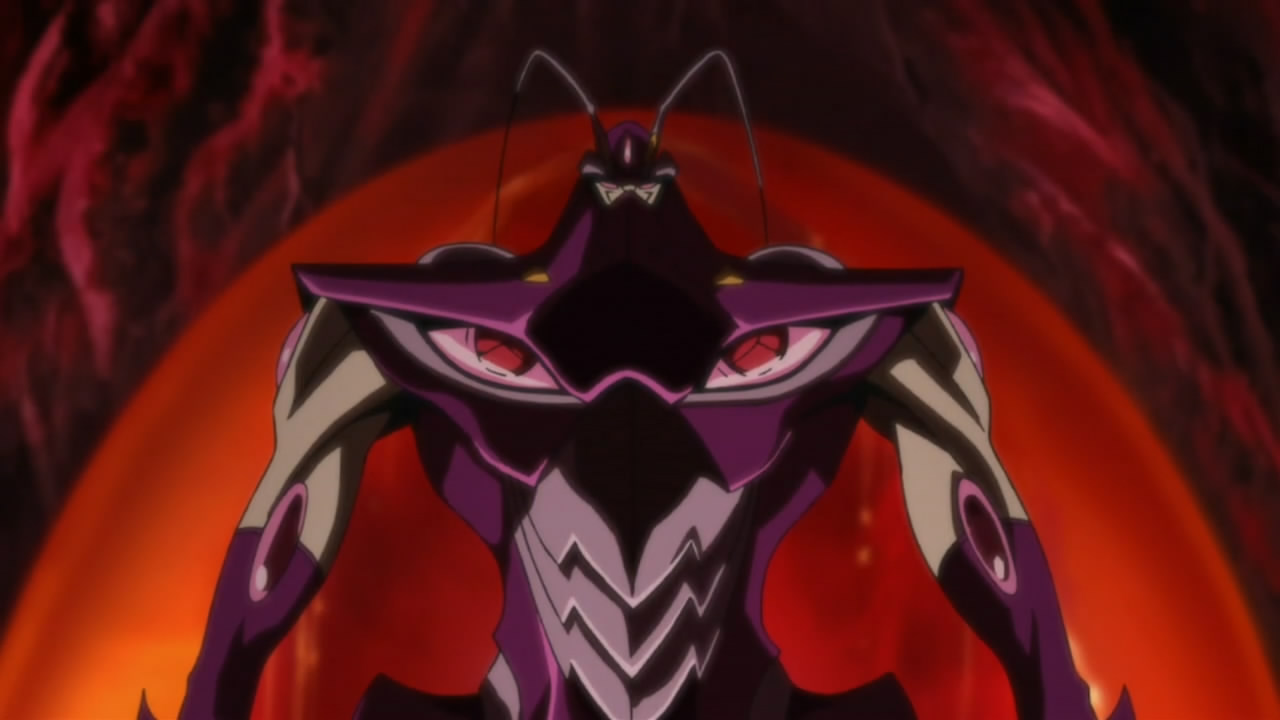 My Thoughts: My name is Brett and nice to meet you all! I was asked by Falldog if I would be interested in following Heroman here at Otaku Revolution. I immediately replied yes, and got right to work on this post. I'm somewhat familiar with Stan Lee and his works, having read some Spider-man and X-men here and there. (Anyone else notice the whole "man/men" trend in every single Stan Lee title?) I remember reading about Heroman a little last year on ANN and thought it was a pretty interesting pairing and idea. I am really a fan of Bones work, and I thought the American take on anime would be interesting. I don't watch too many shows every anime season, and lately have only been watching some older series, but I figured I mine as well give Heroman a shot. After seeing some images in the past few months, the character designs looked familiar, but Heroman didn't look like your typical mech design. It seemed less edgy and blocky, while still keeping that awesome "bad-ass giant robot" feel. I really like the setting of the show, in Western U.S.A. It is a setting rarely seen in anime, and I thought it was portrayed nicely in the first episode. I think Bones did a good job with the animation in the first episode, the character designs are familiar, but look very clean. You can definitely see the influences from Cowboy Bebop, Eureka Seven, and Gurren Lagaan (I know not all are from Studio Bones, but you can definitely see the influence between the animation styles and designs). It is tough to tell whether the animation will be consistent through out the series, let's hope so. The character Psy looks like a young Spike from Cowboy Bebop with giant hair, I love it. He's probably the coolest character introduced in the story so far, hopefully he plays a somewhat major role and it is explained why he is on crutches and what happened to his leg. The lead, Joey, has an extremely wimpy personality. He is scrawny and voiced by 20-something year old female. She does a good job, but it wasn't the voice I was expecting for the character. The more is shown of Joey in the first episode, the more it seems fitting. He has a very feminine and weak appearance, which hasn't annoyed me yet, but it seems like it may eventually. The music through the show is mostly techno-rock, which I felt was very fitting. I enjoyed it for the most part, and my thoughts on the OP and ED can be found at the end of the post. The design of the Skrugg is particularity strange and ugly, I am not a fan of insects at all. As enemies, they aren't a bad choice, but I can't see myself ever liking them like I do some other enemies in anime. It reminds me of Blue Gender's insects, which to this day creep me out. The most interesting part of the first episode is Heroman. Not much is revealed about how he operated, what he exactly is, or if he talks. It could either be really interesting or just extremely bland and boring. I'm hoping there is some back story as to how he arrived and what he is exactly, but I can only imagine the easy route out of it. It is yet to be shown what his "O" formation does, I still think it looks pretty bad-ass though so I'm excited to see it. The part of the episode where Joey is repairing the Heybo action figure really reminds me of what it is like to build Gunpla. To have all your materials laid out on the floor, working for a couple days through the night. It is really an enjoyable experience. The story introduced in the first episode seemed somewhat average, if not predictable at times. It was enjoyable, introduced some neat concepts, but wasn't amazing. I think the show has potential, and I hope it can meet it. Give it a shot if you enjoy Bones' work, prefer a slight taste of American comics in your anime, or are a mech fan in general. Overall Score: 3 out of 5 OP: The opening is solid, I like the song and the animation gets the job done. Not much to say about it really.
ED: I really like the ending song, I'll be honest. It follows suite with the techno-rock-ish (a bit less techno though) feel all of the other music in the show has. I think it is one of the better endings in a while. The comic book style to it is humorous and fitting. The part where Heroman is refereeing the arm wrestling match made my day.
anime
bones
Heroman
Reviews