The "Ichinanashiki Morito Tsugumori Hakugetsu Kai" is the lead Guardian (mecha) from Tsutomu Nihei's popular Knights of Sidonia manga (soon to be CGIhorific anime) piloted by lead character Nagate Tanikaze. It's the first model from the series, is made by Kotobukiya, and retails for about $50 USD + S&H. At 1/100 scale she is anywhere from 8 to 11 inches tall depending on the positioning of the backpack.

I've read a bit of Knights of Sidonia, mainly to help support Vertical Publishing, so bear with me if I don't have all of my terminology in order.

The Tsugumori comes with blade/no blade forearm armor options, extendable batons, a Kabizashi lance, and multiple hand options. There's even a set of hands that would allow multiple Guardians to hook up together for long distance flights.

Tsugumori comes with a few water slide decals (which I seem to have lost!!!). Nearly everything on this kit is one shade of white or grey with a few bits of red here and there. There is one clear piece used for the face/Higgs boson canon.

Note that this kit does not come with a stand! Though a lot of the promotional material for this kit features a stand, and it absolutely needs one, Kotobukiya was kind enough not to supply one. More on that later. Fow now, let's take a look at the kit... 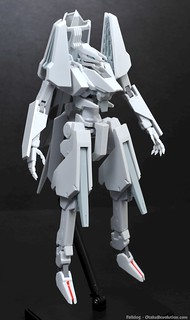 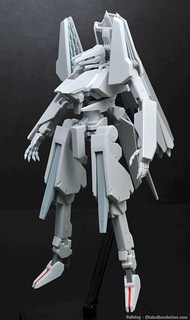 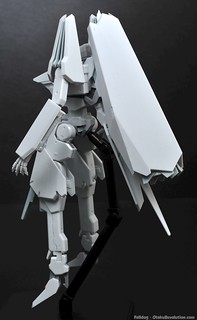 The articulation is passable at best but I expected that going on. The range of motion on the legs is fine but things are limited on the arms. They can't swing that high without popping off the shoulder armor's sides. The hands are limited by the extended forearm armor but they're able to swing in a little bit for some extra wiggle room during posing. 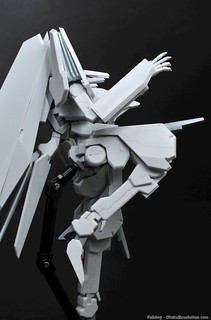 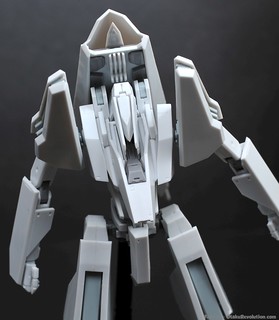 The shoulder joints also move forward for grasping other Guardians

The Tsugumori is one of the few kits from Kotobukiya I've picked up, such as the Frame Arms I wasn't fond of the recent Metal Gear REX that I loved. Coming from the REX I had high hopes for this Gardian but was immediately let down upon finding out the kit didn't come with a stand. Yes, I should've read the find print a bit more, but when the majority of your promotional pictures include a stand (like the REX) you'd better release it with one. Tsugumori definitely needs a stand as well. The feet are far to small to handle the high and rear center of gravity.

The kit also suffers from a lot of visible seam lines, most painfully on the leg. I'm not certain that they would be easy to fix without modification to allow joints to be added post-paint or without some creative painting afterward. 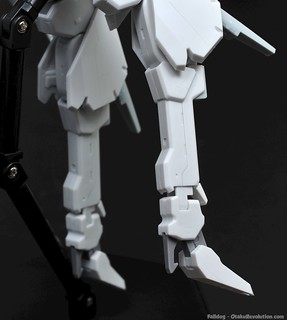 There isn't a lot gimmick wise and I suppose that's to be suspected. It's a suit with more style and fineness than lights and sounds. Batons swing out from the forearm and there's even red things on the feet that flip out (to no benefit in stability). Construction is pretty straightforward with only a few issues. 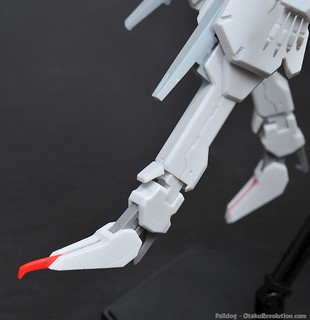 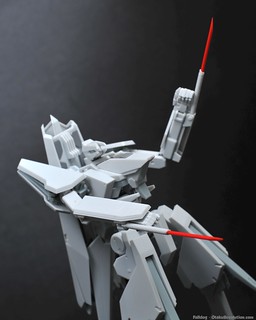 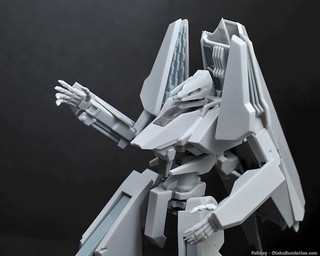 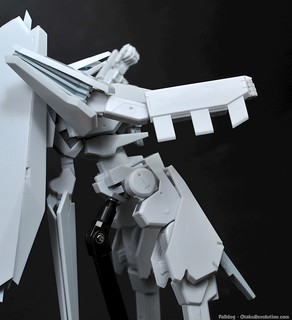 The first and foremost is the elbow joints. It's a ball and socket joint with a polycap ball on a post coming out of the torso. In theory it works really well but the post is longer than polycap ball is deep. As the polycap ball has a hole all the way through it tends to slide to the base of the shoulder and protrude out the other side. This, in turn, prevents the arm from properly sitting on the polycap ball which results in it coming off quite a bit. To fix this I made some washers out of polystyrene with a 1/8 hole in the center. Since that addition I haven't had limbs fall off.

The only other issues are relatively minor and deal with the thrusters on the back of the kit. The thinner one coming out of the bottom of the torso is a ball and socket joint without any polycap elements. Under normal circumstances this wouldn't be an issue because of the light weight nature of the piece. Unfortunately the socket joint has a seam that runs right through it. This causes the piece to want to sit awkwardly any to the side. 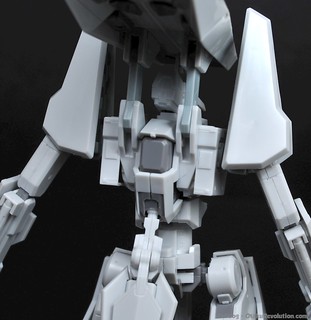 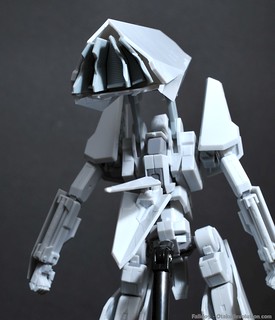 Lastly, the center piece of the main thruster is attached very weakly to the piece that allows it to extend up and down. As a result it easily pops off and becomes loose. Not an issue if fully extended but when not it'll flop around. The only way to get and re-seat the piece is to open up the housing. Since the outer section is one large piece I recommend nipping the connectors so it's easy to remove if need be. 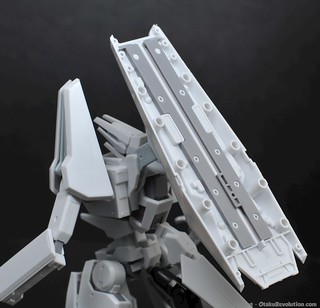 Koto's Tsugumori's strongest point is the over all design of the suit. I'm not sure whether it was Nihei or one of his buddies but it's simply amazing. If you absolutely love Knights of Sidonia and/or absolutely love the design of this kit then Kotobukiya's Tsugumori is right for you. Make sure you get a base when you buy it!). Otherwise I would pass on this. With the upcoming anime series there's a possibility for bigger and badder releases going forward. 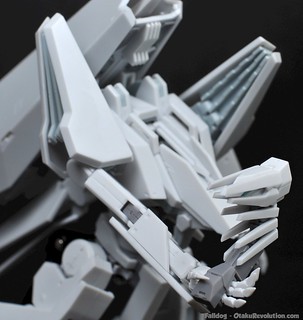 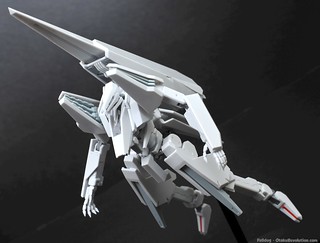 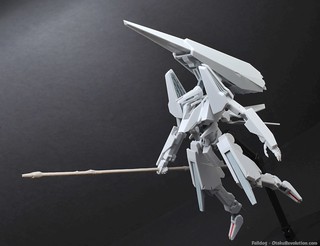 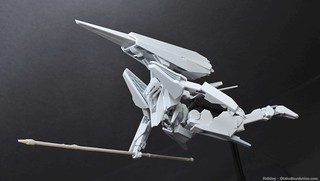 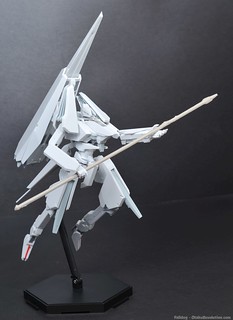