Legend of the Galactic Heroes: Die Neue These Episode 03 Review 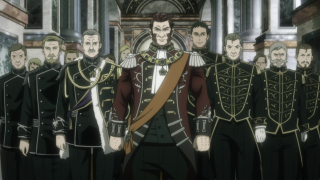 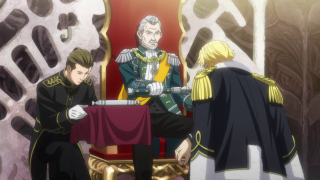 Synopsis:  Reinhard von Lohengramm returns to the planet Odin, the Imperial Capital, victorious from the battle in the Astarte Starzone. There, he receives a promotion to Fleet Admiral from Kaiser Friedrich IV, but he knows no admiration for the ruler. Many years ago, Reinhard's sister was taken to be the Kaiser's concubine, and he and his friend Siegfried Kircheis joined the military in order to one day return her home. In the present, the two officers visit Reinhard's sister, Annerose, for pleasant conversation in the shadow of the last battle that overlaps with the next. 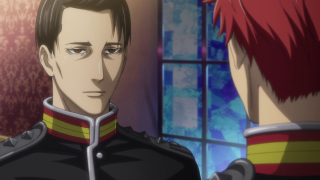 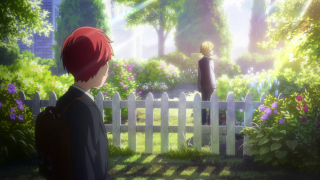 There was some kind of counter online that supposedly kept track of how many of Sentai Filmworks' (classic) Legend of the Galatic Heroes boxsets had been sold yet, which held steady at about 200-210 for several days, and then in the blink of an eye, it was sold out within minutes. It was really suspicious, as if somebody was buying them all out to make the release look like a success, possibly somebody connected with Sentai, if not Sentai themselves.

But then, the set is still advertised as being for sale (at it's absolutely fucking insane price), so that counter might've been bullshit to start with. It's hard for me to believe that all 1000 of these things will even get sold, and I wouldn't be surprised if the leftovers are stored away and claimed as sold by Sentai to make it seem like it's a success. They're a shady company that I really don't trust, and I wouldn't give them a cent to watch LoGH on that shitty HiDive service. Fuck them. Pirate that shit. None of your money is going to the people who made the classic LoGH. You want your money to possibly go to somebody important in the process? Buy the novels. I know I do. I'm not sure Tanaka sees many royalties, but he should.

This episode starts out with a quick rundown of how the political/military situation in LoGH got to where it is. Mankind started emigrating into space and Earth became less important (keep that in mind for later). The colonized planets all formed a Galactic Federation, but things stagnated. One especially ambitious and charismatic individual, Rudolf von Goldenbaum, was elected both President and Prime Minister, abolished the legislature, and began ruling with an iron fist as the first Emperor of the Galactic Empire. This made a lot of people angry and was generally thought of as a bad idea, so they took their shit to the other side of the galaxy and started the democratic Free Planets Alliance. Eventually the two sides met and they've been at war since, for over a century.

The novel goes a bit more into how the Federation was founded in its prologue, the space pirate wars, hero Admiral Wood, Rudolf's eugenics obsession (and his ironic siring of only daughters and one disabled son), "Griping Yusuf", the Phezzan Dominion and its first landesherr, and a little touching on Reinhard and Yang. In the original anime OVA, a lot of this material is revealed over time or in a particularly good documentary-style episode. Some of it is also covered in the side material, the Gaiden OVAs and the like. Anyway, a few minutes for a summary was all this episode really needed to establish where we've been for the past few episodes.

This installment takes place solely in the Empire, where Reinhard has to grit his teeth and endure the pampered aristrocrats who grudgingly accept his presence due to his successes in combat. We're introduced to some of this faction in Gregor von Mückenberger, an important fleet admiral and ground operations specialist Ovlesser (whose new character design has him as more of a roguish Gaston-type rather than the brutal giant he was in the OVA). We're also introduced to Ansbach, who will play a key part in a future tragedy. But most importantly, perhaps, we're introduced to the cyborg eyes-sporting Paul von Oberstein, a man with all the personality of stale bread, but with hidden depths of deviousness. He'll be a vital character eventually.

Much of the episode is spent in a flashback, where we see how Reinhard first met Kircheis, becoming fast friends, and how they both lived for Annerose's smile, until one fateful day when the Emperor wanted to tap that. Enraged by his sister being taken away from him, Reinhard worked harder than he ever did to work his way up in the military, avoiding the spoiled fops and being supported by his friend. I don't know if he had a sister complex, but Kircheis was/is certainly charmed by her. Actually, much of this flashback is from Sieg's perspective, how he was caught in the gravitation of the blond brother and sister who came to be so prominent in the Empire. I like this approach because it allows it to be about Reinhard, but also show that Kircheis has his own perspective, that he values both Reinhard and Annerose, and perhaps even more, what they mean to each other. As he says, even the Kaiser himself could never taint their relationship with his machinations.

It's a pretty straightforward adaptation of the third chapter of the first LoGH novel, right down to Reinhard and Kircheis' visit to Annerose, with the kelsey cake and wine. I mean, it's practically word for word in both set up and dialogue, it's quite impressive in that. However, it does leave out the part at the beginning of the chapter, which takes place on Phezzan, and features a conversation between Adrian Rubinsky and his aide, Boltec. I suppose they'll have to fit that in in the next episode, or some other time, hopefully soon. Rubinksy's a pretty important character in the story.

The next episode is "The Unbeatable Magician", which leads me to believe it'll be an adaptation of chapter four of the first novel. This means we'll see Julian Mintz, Jessica Edwards, Alex Caselnes, and Job Trunicht and see why Yang is eager to get out of the miltary life (and why every time he thinks he's out, they pull him back in). Perhaps we'll even get a flashback to his work during the El Facil incident.

As an owner of the first few novels, this show seems more interesting in its comparison and contrast in adaptation, verses the books and versus the original OVA. If Sentai and the Japanese rights holders to LoGH weren't so greedy, I might not even be following this show so closely. But it's not like it's not enjoyable, just not completely necessary.

Though it will be dubbed, so at least I can speculate about that. 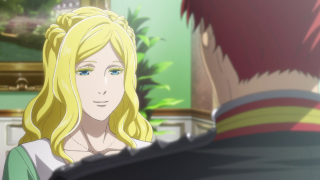 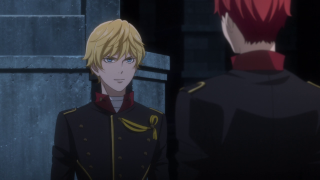