Legend of the Galactic Heroes: Die Neue These Episode 47 Review

Episode 47, "Invitation to a Requiem" 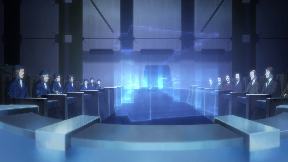 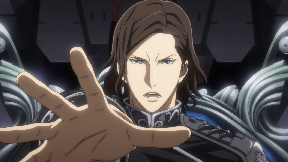 Synopsis: On Heinessen, Admiral Bewcock attempts to warn the government and military about an invasion from the Phezzan Corridor, but is ignored. Oskar von Reuenthal's fleet arrives at the Iserlohn Corridor. The fleet fires at the muzzle of Iserlohn's Thor's Hammer cannon, making it difficult to use. A melee battle ensues between the garrison force and Reuenthal's, creating a battle of attrition. Yang lures Reuenthal out by deploying his flagship, then has the Rosen Ritter squadron infiltrate Reuenthal's ship, the Tristan, where Walter von Schönkopf duels with the heterochromatic admiral. The Rosen Ritter are forced to flee, but Reuenthal decides to withdraw from the battle temporarily. Meanwhile, Reinhard's main force launches from Odin to conquer the Phezzan Corridor. 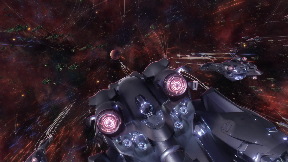 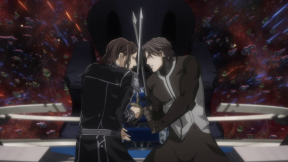 Wow, I loved this episode so much. There was some political talk, fleet combat, hand-to-hand combat, excellent music, and a continuing ramping up to even bigger events. This might be my favorite episode of the season, or even the series itself.

The episode covers Chapter 8 of the fourth Legend of the Galactic Heroes book. Some of the beginning of the chapter had actually been covered in the previous episode, where Reinhard assigned his officers to different duties for the operation. But other than that, this episode covered everything from Bewcock's futile attempt to warn Alliance officials, to the Ulysses retreating upon meeting Reuenthal's fleet, to Reunthal drawing Yang's fleet out to a war of attrition, to Yang luring Reuenthal out with the Hyperion, to the Rosen Ritter infiltrating the Tristan, to the fight between Schönkopf and Reuenthal, to Poplin's discussion with Konev, to Reinhard launching his main force. There were some slight differences in execution, which I'll get into, but otherwise it's pretty strightforward.

The politicians and military bigwigs on Heinessen are so set in their ways, so confident that the balance of power will never suddenly change, they're unwilling to even entertain the notion that Reinhard plans to invade from the Phezzan Corridor. After all, they argue, Phezzan would lose its political neutrality if the Empire conquered the Alliance, and they've invested too much into the Alliance to let that go. And from an ordinary perspective, this makes sense. But Bewcock points out that Phezzan has invested mostly in major industries that wouldn't change much at all should the Empire conquer the Alliance. The Phezzani would likely still control much of those under a united Empire, in other words. What the higher ups fail to recognize is that Reinhard is an iconoclast willing to buck longstanding trends if it will help him obtain his goals. This is why he was willing to let Erwin Josef be kidnapped. They also fail to account for Rubinsky's secret motivations and the Church of Terra's plans. All outmoded ways of thinking and doing will be extinguished soon and the officials on Heinessen are stuck in the past.

Of course, Yang is stuck in the cursed position of knowing pretty much exactly what Reinhard is thinking and doing, but being unable to really do anything about it. He can defend Iserlohn with the forces he's been allowed, but that's about it. Any warning he sends to Heinessen about the Empire going through the Phezzan Corridor will be ignored because "that's not the way things are" to the ignorant officials who can't see how things are changing. And he can't go to the Phezzan Corridor at the moment even if he wanted to because Reuenthal is attacking Iserlohn and they'd be without their commander if he left. So he's in this unenviable place of being completely unable to stop what he knows is coming because he hasn't been given enough power to do it. And maybe he shouldn't technically have such a power, but he wouldn't need it if only the FPA government and military leaders would see what's really going on.

The Empire's first move in Operation Ragnarök is the diversion tactic of Reuenthal invading the Iserlohn Corridor to make it seem like just another attempt to take Iserlohn Fortress. And Reuenthal does his best to make it look dramatic. He manages to make it difficult for Thor's Hammer to fire by targeting the muzzle. In the book, the enemy organizes a semi-enveloping formation within the range of the guns, hoping to take advantage of a blind spot. After the chaos of a melee battle erupts, it then becomes impossible to fire the main guns without hitting allies. Here, Reuenthal makes a bolder move by targeting the main weapon immediately. I like the change, because it makes Reuenthal look clever. I love the part where the Alliance and Imperial ships are locked in a chaotic melee.

Another change comes in the form of Schönkopf's duel with Reuenthal. In the book, Reuenthal is armed with a gun first, then has to resort to a knife, where Schönkopf is armed with a tomahawk and has to use a knife when that's damaged. It's much like the fight depicted in the OVA. Here, there's a much more dramatic exchange, with the two armed with swords, locked in fanciful combat on the bridge of Reuenthal's ship. The way it's depicted, with the phenomenal music and brisk animation makes for a much more theatrical, and in my opinion, more satisfying, battle. Though one wonders if Reuenthal's bridge is protected enough if the Rosen Ritter can just run in.

We get a scene where there's an exchange between my favorite character, Poplin, and his hetero life mate, Ivan Konev. They leave out Poplin's comment from the book about Yang scoring a zero as a lover (how would he know?) but knowing everything else besides, but it was good to see him, anyway. Maybe they should've added a dogfight scene. Ah well.

An amazing episode. And it looks like next week is the season finale. 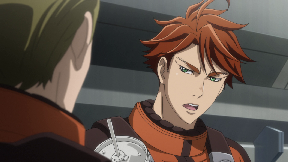 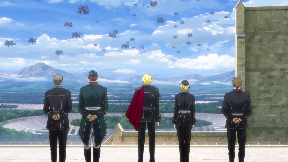