Episode 48, "The Occupation of Fezzan" 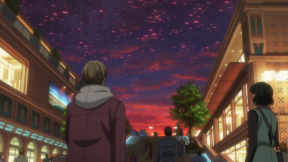 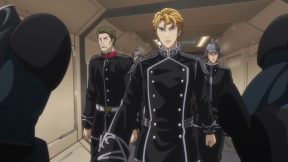 Synopsis: Wolfgang Mittermeyer's fleet arrives at Phezzan, quickly taking control of its key facilities. Julian and Maschungo escape the commissioner's office, having erased key data beforehand. At the Landesherr's residence, Rupert Kesserling points his gun at his father, Adrian Rubinsky, with the intent to supplant him. However, his plans had already been found out and things are reversed. Rubinsky then decides to go underground to wait for an opportunity to return to his position. Mittermeyer has soldiers who committed sexual assault executed. When Reinhard von Lohengramm arrives on Phezzan, the rank-and-file are quick to declare him their new emperor. Using a three dimensional star map, Reinhard plots his course to Heinessen. 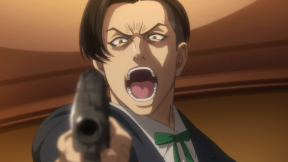 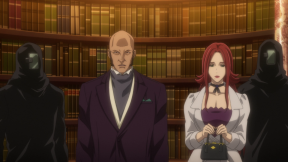 The season finale of this season of DNT isn't as awe-inspiring as the previous episode, but there's plenty going on, regardless. Mittermeyer invades Phezzan, Rupert confronts the Black Fox, and Reinhard receives his accolades for a smart plan. Not a lot of Julian or Maschungo, though, which I find a little weird. I'm pretty sure he had a few more lines in the book.

The episode covers the ninth and final chapter of Legend of the Galactic Heroes volume 4 (called "Stratagem" in the Haikasoru release). It does excise a couple of bits, like Julian trying to convince Commissioner Henslow to delete his computer's drive (only to do it himself after he can't, and taking responsibility for it) and chartering an escape ship, the Beryozka, which is owned by Yang's friend Boris Konev (cousin of Ivan Konev, mah boi Poplin's wing man). But other than that, it fairly faithfully adapts everything from Mittermeyer's fleet filling the skies over Phezzan, to Kesserling confronting Rubinsky, to the public execution of the rapist soldiers, to Reinhard's arrival on Phezzan, to Reinhard in the navigation room, looking ahead to Heinessen.

You'll have to forgive me if I'm having a hard time telling the difference between what Rubinsky planned to happen and what actually happened. I thought it was inevitable that Phezzan would be occupied as part of the plan to use the Phezzan Corridor to invade the FPA's territory. Did the Black Fox think otherwise? Boltec surely thought it would be inevitable, which is why he positioned himself in regard to Reinhard so that he may replace Rubinsky. Apparently, though, Rubinsky didn't think the occupation would be so sudden or complete, so in that sense Reinhard completely outplayed him. But he was playing with fire this whole time, so it's not surprising he found himself burned. All I recall is that he planned on taking control of a united Galactic Empire financially through Phezzani economic control, but I guess with Phezzan occupied, all he can do is go underground for the time being. The Terra church will have something to say about this.

But despite being the loser in this, Rubinsky certainly didn't seem like it as he stared into the barrel of his son's pistol. Perhaps predictably, Dominique had been on Rubinsky's side the entire time, and poor Rupert paid the price for wanting to get his own hands dirty. What Kesserling planned on doing himself is a bit of a mystery to me, because even with Rubinsky dead, there was no guarantee that a failing Boltec would lead to a Kesserling administration afterwards. Reinhard could easily have chosen any number of people easier to handle than a man who betrayed his father for a position. Neither father nor son really thought ahead enough. But I don't necessarily see it as a deficit of the writing, but rather the usual arrogance of the positions of institutional power. The ultimate loser in this episode was Rupert Kesserling and the ultimate winner was Reinhard von Lohengramm. Adrian Rubinsky fell somewhere in the middle.

One of my favorite scenes in this episode is when Reinhard arrives on Phezzan and steps before an enormous crowd of his soldiers, who then begin yelling out, "Sieg Kaiser Reinhard! Sieg Mein Kaiser!" It shows that the rank-and-file men are all ready to accept Reinhard as their official head of state even before he officially is. After all, thanks to him, the impossible has already been done and the Phezzan Corridor has been occupied. It will only take the defeat of the Alliance forces beyond the corridor before the entirety of humanity is under his rule, and he's already proved himself more than a match for those forces in previous battles.

Another good scene, though perhaps a little overindulgent, is the final one, where Reinhard is at the Navigation Bureau office and walks through the three dimensional star map to the screen that has Heinessen on it. It was a great way to end the episode, perhaps even the season, but I also felt like it took up a lot of time that could have been used to give Julian another line or two before he disappeared. Still, it's hard to beat the visual of Reinhard making his way through the stars and planets towards his destination.

This is the end of season 4 of Die Nue These, and I felt like it was a damn good season. It started off strong with the final bit of the Iserlohn vs Geiersburg battle, and covered all of the fourth book. I hope the next season comes soon and covers what is probably the best material of the books, the ultimate showdown between the FPA and the Galactic Empire, in Volume 5. I certainly hope they dub this season and put it out (along with season 3) on Blu-Ray. It's well worth collecting and rewatching again and again. 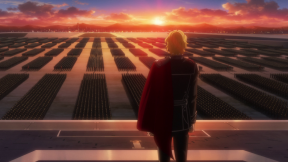 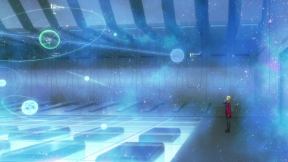