Episode 13, "The Bow, the Princess, and the Terrorist" 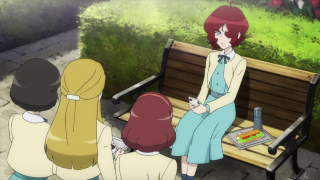 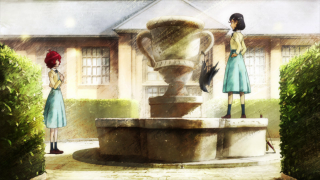 Synopsis:  Lupin and the gang are after The Bloody Teardrop, a gem possessed by Princess Dolma of the kingdom of Padar. Coincidentally, Dolma attends the same private school as Ami, and they make fast friends. When a group of terrorists occupy the school to ransom its wealthy clientele to their families, Ami teams up with Fujiko, under cover as a teacher, to throw a wrench in their plans. Will Fujiko snag the jewel before Lupin, or will it turn into a bloody mess? The bustiest burglar has a lot of skin in this game! 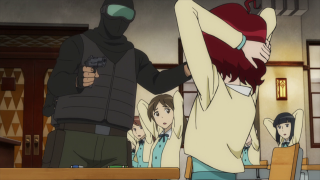 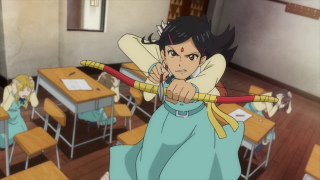 Sisters doin' it for themselves.

Two relationships are the essence of this episode that sees a group of terrorists seize the exclusive girls' private school for the well-to-do, with the intention of ransoming them to their families.

The first is the budding friendship between two outcasts, our super hacker from the first story arc, Ami, who's having trouble making friends, and the princess of a country called Padar. Said royal, Dolma, carries a bow, with which she is highly skilled. The two bond over their mutual uniqueness among their classmates. Dolma is a bit bolder than Ami, who relies on her ability to manipulate technology. There's a real physical hardiness and skill to the princess, which makes her leap in to assist her new friend and a sense of stalwartness that keeps her level headed even when shot at. For her part, Ami is a bit reticent and introverted, but she's not exactly a timid wallflower, either. You really want to see these girls' friendship continue, though you're only given a few scenes of them really connecting.

The other relationship is the reluctant (on Ami's part) partnership between Ami and Fujiko. Ami remembers Fujiko from the Lupin Game incident, and doesn't particularly care for her. Maybe it's because Fujiko is that rare combination of deceitful and brazen, hiding her intentions, but always extravagant in her attitude. After saving Ami from nearly being assaulted (the girl made a bad decision to pretend to seduce her guard), Fujiko shamelessly teases her for her efforts instead of offering comfort for her ordeal. But I think, in a way, this is Fujiko's way of doing just that, because it would seem awkward for her to be earnestly caring to somebody who can see through her lies. They team up to rescue Dolma (though Fujiko has a less than selfless reason), both using their expertise, Ami's technical prowess and Fujiko's... uh, her Fujis... ko. Tig ol bitties.

It's arguable how well Fujiko was doing with just her body, with the leader terrorist looking less than impressed, which is why Fujiko goes the less pleasant route, which looks like it killed nearly everyone in that room, because it's pechos o plomo, and she will knife you and shoot you without a second thought. I mean, wow, and we thought Goemon had ice water in his veins.

That less-than-selfless reason Fujiko had for saving Dolma (only for her to be taken again by a different group of armed men) was the Bloody Teardrop, a jewel passed down through the Padar royal family. Lupin, Jigen, and Goemon are after it as well, but they have to start on the outside of the compound, working their way through guards in an effort to get to Dolma (and probably also to help Ami). My question is, was Fujiko pulling her own undercover operation to get the Bloody Teardrop, separate from Lupin, or is she working with him? My bet would be the former, given her tendency to want things to themselves, but she could have just asked Lupin to steal it for her (hm, maybe that was his goal). Perhaps we'll find out in the next episode.

I'd say the production values stayed mostly on point in this episode, with few shots of wonky art. The music wasn't really standing out significantly, but I love Dolma's character design and the animation of her charging to the front of the classroom with her bow to protect Ami. As always, the establishing shots and much of the background detail is impressive, even in quick scenes such as Goemon's cutting down of a guard in the forests. I applaud all of that effort to make everything have a painted feel, but also seem fairly realistic in a sense.

Well, it looks like Dolma is being recalled back to Padar, because the next episode preview sees the gang there as well. I can't really blame the king from having her taken back, given the incident that just occurred. I also hope Lupin will be less of an outsider in the next part of this story. 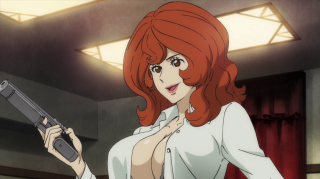 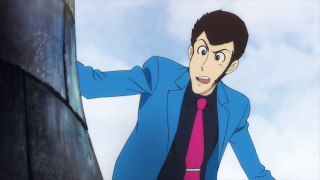