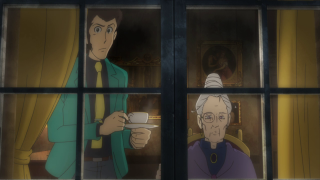 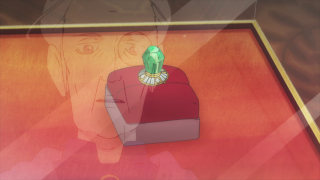 Synopsis:  Lupin is summoned to the home of Count Phillipe de Maunbassant's widow, Isabelle, to solve the mystery of his murder. His reward for playing detective will be the jewel he'd previously attempted to steal from the couple. The suspects include a famous sommelier, the count's nephew, and a business rival. However, Lupin must contend with a second murder, and the house is sealed until morning. Can famous detective "Jim Barnett" root out the killer and retrieve his prize? It's a whodunit where the criminal ISN'T Lupin! 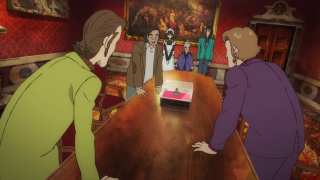 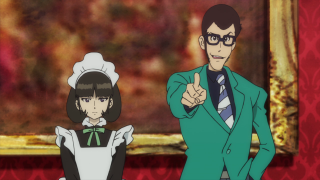 Well, this is certainly a change of pace. It's Lupin III in a murder mystery, cast as the problem solver, rather than the problem maker. He's even sporting his green jacket from Part I, from which this episode borrows and references a little from. He's also a solo act in this, too, with Jigen, Goemon, Fujiko, and Zenigata nowhere to be seen. So it's a unique episode with a set up that casts Lupin in a different role.

Our whodunit mystery sees the Countess Isabelle gather at her home her three main suspects for the killing of her husband, who made his money on security systems. Frederik Autorett, who failed to convince the Count to sell the emerald ring that Lupin also desires, Allan Dubois, whose father committed suicide after his business failed and the Count refused to aid him despite his relation, and Pierre Schmidt, who used to run a competing security systems company. Asserting that she has proof of the killer left on the jewel in the hopes of coaxing a confession, the Countess is instead murdered herself. So Lupin has to step in as private eye Jim Barnett to solve the mystery, while the whole group, including the maid, is locked down for the night.

Naturally, Lupin doesn't seem to be doing this for altruistic reasons, but he actually does seem to care about the death of Isabelle in the course of the situation. He had constantly tried to steal the ring from the Count, creating as sort of closeness with the Count in that he was inspired to create even better security systems, such as the (albeit rudimentary) facial recognition computer Isabelle uses in her mansion. The Count collected newspaper clippings of Lupin to the point where he became a fan. I think as soon as Lupin saw the late Count's wife also dying from a gunshot, he felt a real obligation to resolve the issue. Otherwise, he could have just tried to take the jewel (which was right out in the open) and ignored the mystery. The sentimental Lupin that leaves the ring where he leaves it in the end is almost like the Castle of Cagliostro style of Lupin.

The mystery itself is nothing incredibly special. Three suspects, all have reasons to take measures against the Count and his wife, but none of them get much of a rounded characterization. They're mostly just vehicles for the plot to continue, and in the end, it's not really a catharsis that the killer is stopped, but more that Lupin is clever and also shows loyalty to people who ask for his assistance. It has a stock "the killer was a twin" murder mystery conclusion that's hardly a noodle scratcher. This episode is more of a showcase of Lupin's cleverness than anything else, and would only work as a standalone adventure.

Not that it isn't believable that these twin nephews would want revenge for the death of their father. From their perspective, their father's suicide was caused by the Count's refusal to bail out his failing business. If you ask me, though (and let's face it, you have), their father splitting them up because he thought twins were bad luck, and only raising one, was pretty scummy, and the man was pretty selfish. I don't know if the Count knew about that, but it's possible despite his relation to him, he felt his bad character made him unworthy of help. You could argue that the Count should have at least helped his nephew(s). But it's hardly worth murdering the guy and his wife (to be fair, Isabelle was bluffing that she had proof of who the real killer was, so as far as they knew, they had to silence her).

Another dimension to this is that Phillipe's killer (whichever one of the brothers it was is irrelevant) was trying to get the ring off his body before he had to run off due to a crowd gathering. The same ring that was a family heirloom. Perhaps the twins felt that they were at least owed that much.

Anyway, Lupin leaving the ring with Isabelle in the end might be out of character for a more "hardcore" Lupin, but even some of the edgier interpretations do have a soft spot or two  (usually his head), so I'll let it pass. Especially since we got a version of "Fire Treasure" during that scene.

A decent episode. Not a stand out, but it's something different while not seeming too out of place. Just an enjoyable one-off without any major missteps. And hey, we got to see Lupin with glasses, like in The Fuma Conspiracy! 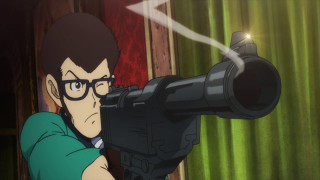 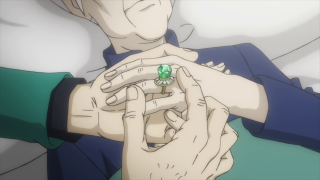