Episode 23, "Just Then, An Old Buddy Said Something" 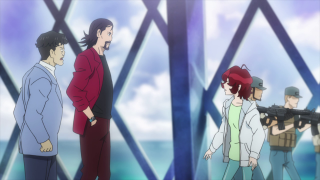 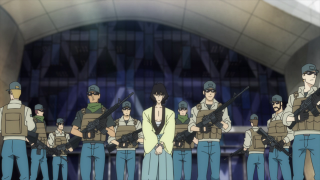 Synopsis:  Injured, Lupin is taken into custody by the ICPO, along with a regretful Goemon. Ami tries to reach out to her father, only to find that he's more interested in PeopleLog than in her. While transferring Lupin to ICPO HQ in Lyon, the convoy carrying Lupin is stopped by Jigen, who uses an arsenal of weapons to free his colleagues. With Lupin rescued, Jigen advises Lupin to retire, as their business has gotten too risky. Lupin has different plans, though, exploiting PeopleLog to release classified information and causing a stir among world governments who look to regulate the platform. Can Lupin turn PeopleLog against Enzo? It's an episode you'll want to leak to the public! 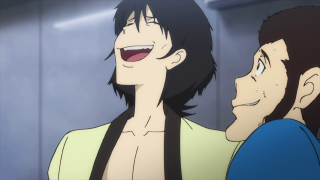 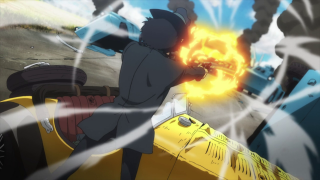 Lupin never stays captured for long, does he? It seems like even less time than before, because in Part IV, it was for, what, about a year? This time, however, it's not a clever gambit that frees our favorite monkey-faced mountebank. It's just good ol' fashioned "FUCK THA POLICE" with a shit load of rounds.

Lupin seems to forgive Goemon pretty quickly after having been greviously injured by him, lending some credibility to my theory that he might've not given his all to the fight. Clearly the victory became hollow immediately to the walking anachronism, because he looked pretty out of sorts throughout most of the episode, even giving Zenigata his sword. Lupin prioritizes Goemon's feelings over his own, getting him to laugh at their situation. I'm pretty sure that's what made them friends back in Part I.

It turns out that Enzo is just a terrible father after all. He may have started out wanting to ensure nobody would have to disappear like his daughter, or maybe he didn't care all along, but clearly he's much more interested in PeopleLog than, you know, actual people. Even his crony, who'd stuck up for him to Fujiko is taken a little aback by his attitude towards Ami. It's not as though she was looking for her father all these years. She had ample opportunity as soon as she was sprung from that tower to track him down. But it's still alarming when you assume that a parent at least has some warmth for you and they look right past you to something else. I have a feeling he's going to regret spurning Ami, because she's already somewhat of a Lupin devotee, and doing what he did and acting the way he acts, she's going to be part of his downfall.

We're given a little insight into ol' Pops in this episode, not really caring about getting the lion's share of credit for Lupin's arrest (I mean, he really didn't DO anything, Enzo did it). What's important to him is for Lupin to admit he's bested, to serve his time, hopefully rehabilitate, and become somebody he can have a drink with (kind of like in the ending credit sequence).

But fuck that noise, Jigen shows up and starts blasting away at the caravan leading Lupin to ICPO HQ. I mean, it's an outright massacre, he clearly kills several police officers, shoots one right in the eye. He's got a grenade launcher, an anti-tank gun, his revolver, and he's blowing up helicopters! Dude, Jigen, I know you're trying to save Lupin and Goemon, and that you're a criminal, but this... this is a little much, man. That was just a blood bath. Am I the only one seeing this? He killed, like, everybody except Pops and his partner.

Lupin decides if he can't beat 'em, join 'em, using PeopleLog for his own benefit by flooding it with all kinds of leaked information onto the network which gets verified. This really riles politicians and business types alike, not happy with their dirty laundry being aired. So governments are looking to curb PeopleLog for security reasons, and that seems to only be part one of Lupin's plan.

Lupin and the gang are hanging out somewhere most people would never expect, the dungeon of the Castle of Cagliostro itself, where he once shared a smoke with Pops. He's got some kind of scheme cooking, and apparently it involves Rebecca from Part IV. I'm looking forward to the grand finale. 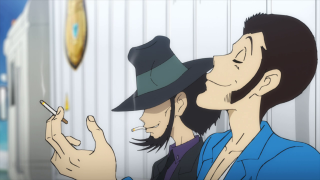 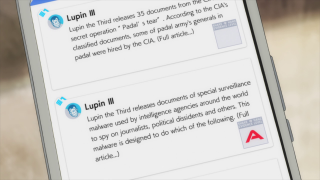