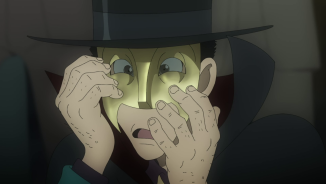 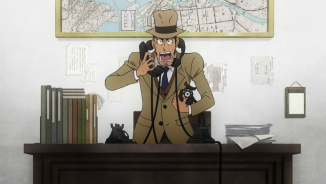 Synopsis: Lupin suddenly finds himself in early Showa Era Japan, where he is identified as the thief Golden Mask, and pursued by Inspector Namikoshi and famous detective Kogoro Akechi. He keeps spotting familiar faces, but they're all different people in this time period. He is convinced that taking possession of an enormous clock from Chinas Yuan Dynasty, found by a woman named Ruriko, will assist him in finding answers to his situation. But he has to contend with rivals in stealing in addition to law enforcement. Can Lupin pull off the historical heist? Trouble strikes like clockwork in this mysterious adventure in the past! 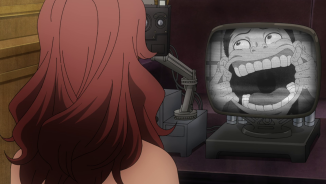 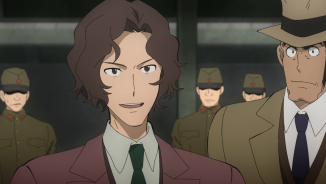 This episode takes place in the Showa Era, which means Lupin's either dreaming or he's taken a trip back in time. Strangely, though, so many of the people he meets in the past have taken the form of people he already knows. He sees Zenigata, Fujiko, Jigen, and, in the end of this part, Goemon. But none of them know him. Or at least, not the real him. They see him as Arsene Lupin, the infamous gentleman thief, in the guise of Golden Mask, which was recently discovered by Kogoro Akechi. So once again, Lupin is pitted against a literary detective, much like in the main arc of this series, where he's up against Sherlock Holmes.

Kogoro Akechi is the creation of Japanese mystery writer Edogawa Ranpo, who lived from 1894 to 1965. Ranpo's fictional detective starred in many short stories and novels. In fact, Ranpo was at least as prolific and accomplished as the subject of the previous episode, Ernest Hemingway, producing both long form and short form prose. He may not be as celebrated as Hemingway, at least not in the West, but he was a major literary figure.

But as for me? I'm not that familiar with Ranpo. So I had to look up a lot of things just to keep up with the episode, let alone review it for my blog. For instance, the character Fujiko represents in this story is apparently named Black Lizard.

But let's take a look at the episode based solely on how it's presented, instead of relying on all the references to Ranpo's fiction. For one, I find the between-World-Wars Showa period setting to be incredibly charming and ripe for material for Lupin III, since you had a time where theives could realistically get away with a lot more than in modern times with its complicated technology. Normally I dislike time travel in Lupin, but that's usually because it's bogged down in how Lupin's tampering with the past will affect the future, and this episode doesn't seem to particularly care about that kind of thing.

If I have a problem with the episode, is that there are so many damn characters. You have Lupin, Black Lizard, Inspector Namikoshi, Kogoro Akechi, that officer guy, the guy Jigen represents, Ruriko, Ruriko's partner (in more than one way) Sarantuya (by the way, having clear lesbians in the Showa era? Risque!), and Goemon. It's a lot to keep track of, and frankly makes the proceedings a little overly convoluted.

I still look foward to seeing where this story takes us, though. I just hope it doesn't overstay its welcome, because I really want to get back to the Holmes storyline. 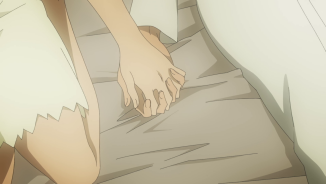 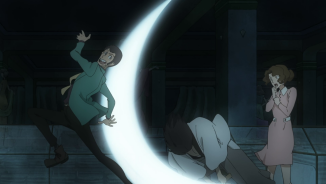