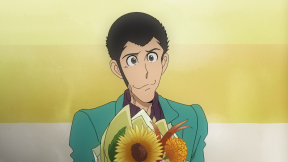 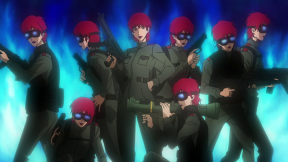 Synopsis: The group of thieves that stole Lupin's family gem, Elvira, is targeting the Banco Alban in Mexico. This is an obvious challenge for Lupin to interfere, which Lupin takes them up on. On the way to Mexico, Lupin reveals that the Elivra leader, Mercedes, mentioned his thieving instructor, Tomoe, who was like a mother to him. What happens next is a showdown between two of Tomoe's students in a battle of wits! 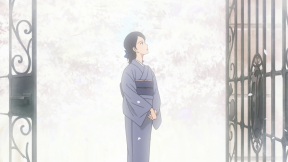 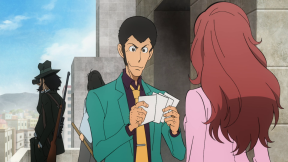 I have to start getting to these reviews earlier, I realize. But this was a weird week for me, mood-wise. I apologize.

So now we have a little more clarification for some of the mysteries of the previous episode. Tomoe wasn't really Lupin's biological mother (he doesn't know who that is), but she was like a mother to him, in charge of caretaking and tutoring him in thievery. That is, until she stole the red jewel from the Lupin mansion and was presumably killed for it. Mercedes, the leader of the group of thieves from the previous episode also seems to have learned from Tomoe, though Lupin has a hard time believing she survived to teach her. But when it comes to who the better thief is, obviously Lupin is the superior, outmaneuvering Mercedes to take posession of the jewel, thanks to Fujiko (who had some kind of cloaking device?!).

I do think it's a little strange the relationship this series has with Lupin mysteries. It teased that Lupin killed Watson, only for it to turn out soon after that not only had he not, but Sherlock basically already knew he didn't. Now, despite teasing that Tome was Lupin's mother, she wasn't really Lupin's mother, but kind of like a mother. The promotional ads for this series have been very misleading, and it bothers me a little, even if what we end up getting instead of what we expected is still pretty good. It just feels like the audience is being jerked around a little.

I think the best part of this episode were the little interactions between Lupin and his gang. Tomoe may have basically warned Lupin to not trust anyone, but Lupin's companions actually add to his effectiveness as a thief and a substance to his life. His camping out with Jigen and Goemon as he relays the story of his childhood, with his tricking Jigen into drinking salt, just shows that he's a pretty sociable guy, and he actually does trust his group with some of his secrets. Maybe that's why he's a happier person than Mercedes.

I do have to laugh a bit at how the Elvira group is mostly males with female-styled red wigs. Not only does it make it easier for Mercedes to blend in with her subordinates, but in meta sense, it makes it easier for the animators, since they can just reuse the same basic model during scenes where there's a lot going on at the same time, saving time and energy in the production of the episodes. Is it corner-cutting? Obviously, but it's amusing to me, instead of annoying.

Anyway, the next episode doesn't appear to be connected to this arc, so I guess we're off to standalone adventures for a while. But this was a pretty solid episode, so I can forgive it. I just hope the standalones aren't as bad as some of the ones in the first half of the series. 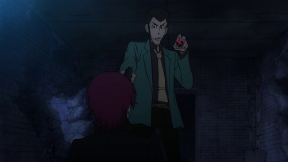 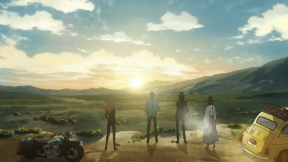