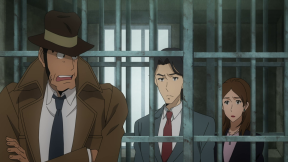 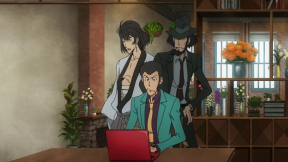 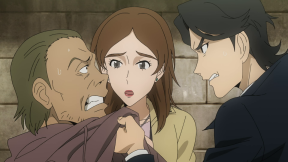 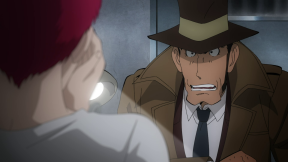 Well, there was quite a twist in this one, wasn't there? I certainly wasn't expecting it. The plot involving Hazel and Tomoe is thickening.

It's worth noting that Lupin and the gang are barely in this episode, having left Cotornica last episode after Lupin (seemingly) dealt with Hazel's blackmail problem. Apparently they're back in their New York apartment with the flowers Lupin bought from Mattea's shop. They get a couple of quick scenes that have no real bearing on the plot, and we don't even get Fujiko at all. It's kind of off-putting to have an episode of a Lupin series with so little of the main character. And no caper, either. I know it's a continuing storyline, but it's got to have something to do with Lupin again in the near future, or I'm going to lose interest.

Not that there aren't interesting elements in it as it is, because I quite enjoyed this entry. Watching Yata, a pretty minor character, all things considered, and Ari, a brand new and also minor character, get a focus, even taking the focus away from Zenigata, was a pretty bold move by the writer, as it ran the risk of alienating the longtime Lupin viewers. But it managed to keep my attention the entire time because of the mysteries surrounding Hazel's demise and Tomoe's connection with so many characters.

The revelation that it was Mattea who murdered Hazel was pretty mindblowing. After all the time she spent with Lupin, being very friendly and cute, you wouldn't expect that there would be this nefarious side to her. The only suspicious thing she'd done is coincidentally being in Cotornica when Lupin travelled there to investigate Hazel. I'd be interested in what kind of connection she has to Tomoe, if any. Is she Tomoe's new student, or is she Tomoe herself in disguise, erasing her past?

And is Ari really dead, like Hazel? Or was she merely injured and will recover? It doesn't look like the next episode is arc-related, so I guess it'll be a while before we find out what happened to her and what happens next in this storyline. But so far, I'm liking it. 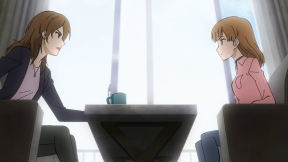 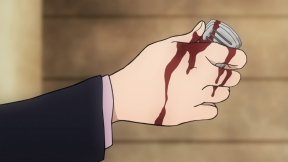