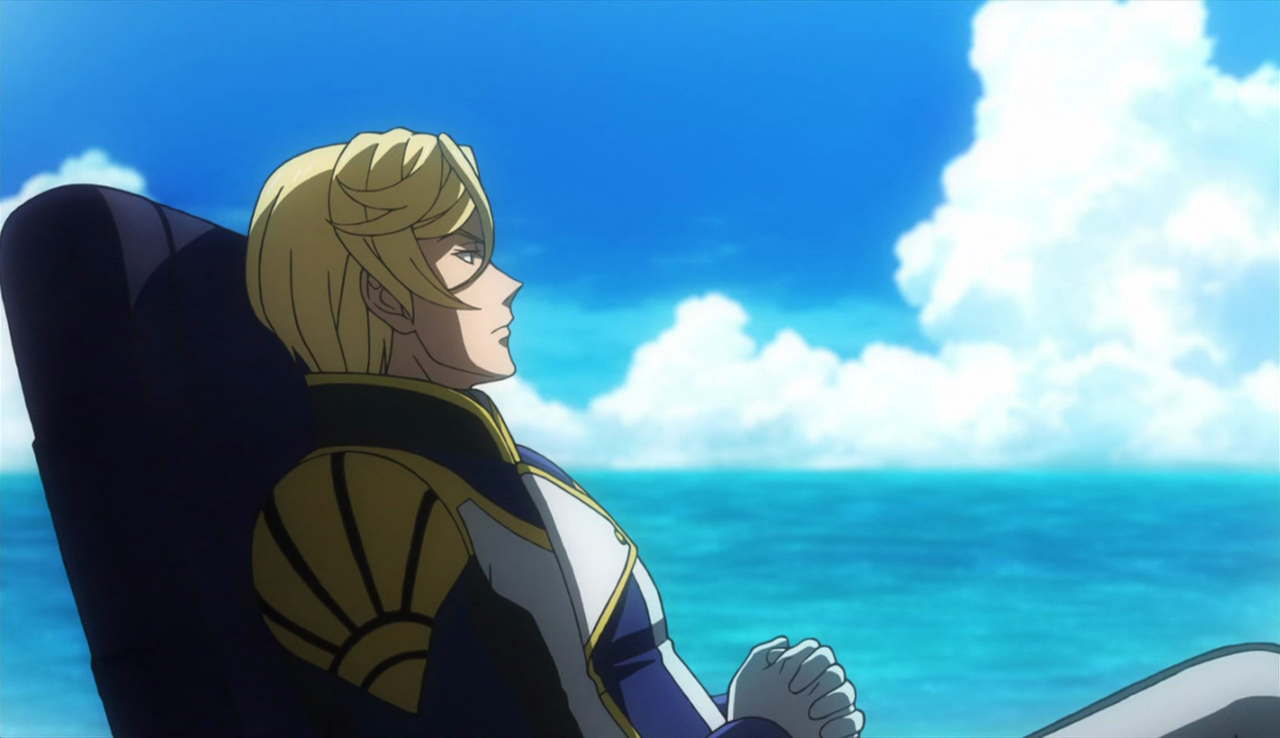 …It was using soggy biscuits.

UNEXPECTEDLY, as if the last episode did not imply it in any way, shape, or form that something would happen, we finally get our first few major deaths of the season. Yeah, maybe Aston’s death is kinda tragic, but we only knew him for about seven episodes and were more inclined to feel bad for Takaki. Here? We have some Season 1 veterans biting the dust: Naze and Amida. The entire situation they are in is rather predictable, but as always it is the execution that matters and this episode does it so darn well.

My prediction of McMurdo holding Mika ‘hostage’ in Saisei is unfounded, especially since Mika is a good judge of character and doesn’t try and stop McMurdo from doing what he has to do as a crime boss. Orga on the other hand is at wit’s end, knowing that intervening for Naze would compromise Tekkadan. However, cooler rebellious heads come by in the most refreshing way possible. What could’ve been just Orga waffling around doing nothing ends up as a very refreshing spotlight on three characters who are routinely overshadowed by Mika: Shino, Akihiro, and Ride. Under the guise of ‘booster testing’, the first two posit a rescue of the evacuating Turbine women, with the additional possibility of saving Naze. What a great way to allow those three to shine, and also show how far they’ve come as pilots thanks to the Turbines’s influence.

We also find here how incredibly ruthless Iok is by way of him ignoring the ceasefire request of Naze, and utilizing the Dansleif rail guns to bring down every last Turbine he can see. Perhaps Macky should’ve opted to try and vie for Arianrhod, because clearly Iok should’ve been in the same position Carta was as head of the Outer Sphere Earth Defense or whatever. He’s just Carat with power, and that’s scary (even scarier is I just realized the red liner on his face may be the show’s allusion that he is her). Naze and Amida put up a good final fight, but like anything it is inevitably soured by their being overwhelmed by greater forces.

The good thing though is the character development we see to not just Iok but Julieta. The latter launches in her brand new mobile suit, badass in more ways than one right down to the Ivy from Soul Calibur-esque chain swords, yet gets routed by Amida’s less powerful mobile suit. During the fight Amida not only lays some physical blows but verbal blows to Julieta, juxtaposing their views of moving on up. Julieta is a subordinate who wants to elevate her superior, and Amida wants to elevate not just Turbine but herself (and possibly implicitly by extension every member of the Turbines). So I’m sure this will give Julieta some pause to think about what she wants out of life before either changing or doubling down. Iok on the other hand, is a wimp of the highest order, because moments after Amida shoots one shot, breaking the bridge he refused to move to battle stations on out of arrogance, all he can do is hide behind his chair as the Hammerhead barrels forward to ram him. Does it though? I’m not sure, no grotesque death scene for Iok occurs, for the Hammerhead veers from him and hits an incoming ship. If it does it’d be both disappointing and amazing. Disappointing because Iok is still alive, but amazing the show would be this hard to us in such an episode.

And here I thought one person’s death in Victory Gundam, where he rams his Core Fighter into a wheeled ship to stop it but fails, would be the darkest Pyrrhic victory ever in the franchise. It may not be, after all. This may top it, especially since we knew Naze and Amida much more than that guy that died. Either way, I’m wrecked, Tekkadan’s wrecked (especially those last scenes of them mourning), and the Turbines are wrecked (poor Lafter). We’re in need of some closure, but this will not happen until next week.