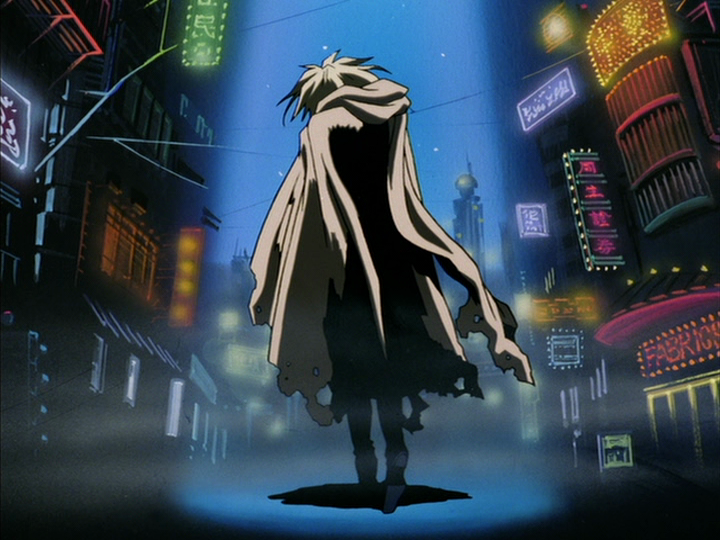 Obviously after such a whirlwind series of events, Gene and the gang (this includes you, the viewer) have to take a break. So, we’re back at Blue Heaven, and as the Outlaw Star begins its dynamic change into the iconic ship in the opening, our remaining three heroes take some deserved R&R. Except, as per the episode title “Beast Girl! Ready to Pounce!” this isn’t going to come true.

Unlike her shrill, screamy, debut on Episode 03, the Ctarl-Ctarl’s character is handled better. Despite being a product of a proud, privileged, family with a military history, Aisha’s well… a bit dim and goofy. It helps how Gene and the gang are unfazed and unimpressed by her, and thus opens the gate for some amusing moments. We get some good fight scenes between her and Gene, and a tease of a greater Beast form in the future, so when she finally joins the crew (you don’t want the opening to LIE to you, this isn’t Gundam SEED after all) those character qualities are good to have.

Yet it isn’t just about hijinks with alien catgirls, there’s also quite a bit of character development. After the eyecatch, Gene and Melfina catch a breather in an empty park. It’s a nice, quiet, scene providing us with long-awaited rapport between the two. Gene doesn’t provide answers to Melfina’s existential questions, but he does clear the air by his open surprise and playful (wholesome at that) demeanour. Melfina may be a mystery, but regardless Gene accepts her either way, which makes Gene all the more appealing and Melfina all the more open, awkward, and sweet. In a light-hearted action show set in the future space of space in the future, this is welcome. Nobody needs to be a big Mopey McMopehead, despite the death of Hilda last week.

Other than that, not much to be said of this episode. This episode serves as an amusing break from all the big things happening in their universe, and the writing keeps it so without any BIG plot reveals. It helps flesh out a character we’ll see more of in the future (including how she can take a Caster bullet), and at episode’s end we’ve a direction to go to before the grand adventure to the Galactic Leyline!

…And that’s to back home to get the necessary supplies needed so they CAN have that grand adventure to the Galactic Leyline.