Welcome to part two of my four part series on Gundam SEED! My goal with this series has been to rewatch Gundam SEED for the first time since it originally aired back in 2002. It’s a rewatch with open arms and an open mind after almost a decade of seemingly universal SEED hatred within the North American Gundam community.

So far my experience has been mostly positive. There are some rough parts, not really with the characters, but the weak plot and setting. Certainly nothing to justify the vehement hate.

If this is your first time seeing a Revisiting Gundam SEED article please check out Part 1 Here. 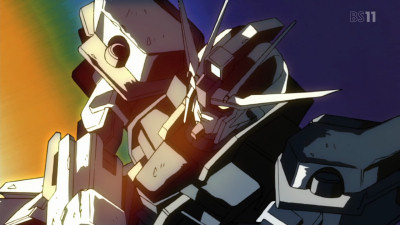 Looking Back at Part 1

Before getting to my comments on the second quarter of Gundam SEED I wanted to take a few moments to address the first part of my review, or rather, some of the comments that it garnered.

Newtypes v. Coordinators you say? Well, that was bound to come up at some point, though I was waiting for the end of the series to see how things fleshed out. I agree, it’s nice to see both sides of the racial divide but I can’t really credit SEED for handling that too well. From what I’ve seen both sides are a bunch of children and the radical Blue Cosmos group hasn’t done much more than spill some condiments and get mentioned in passing. I prefer the slower development of a Newtype, and the mystery surrounding it, instead of the plausible yet boring coordinator origins.

Zeta Gundam has flaws? Well, yes, it’s not perfect but one can blame its issues on 80’s anime trends. SEED only has itself to blame.

To the person who commenting on the rapid development of mobile suit tech in the series, you’re absolutely right. I hadn’t realized it until you pointed it out. While the franchise’s non-UC era shows had been slowly leaving its “realistic” roots behind, SEED really took it a huge step further. Everyone except for the Earth folks pretty much start out with overly impressive mobile suits which can only (and do) develop into brighter and flashier models way too quickly.

One or two commenters mentioned that the HD remake I was watching was only one phase of Sunrise’s remake. It seems I was checking out the version which aired on TV initially and Sunrise later released a full remake with updated animation all over the place. As one source dried up I moved to a second and now, I think, I’m watching the final release. Frankly, I can’t tell whether the fully re-done animation looks better or worse. Sure, it’s cleaner and nicer looking, but the style change is just doesn’t look right... 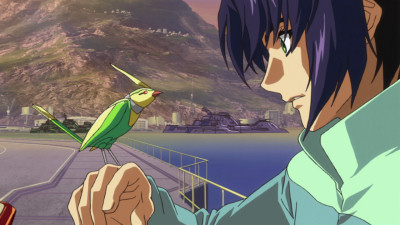 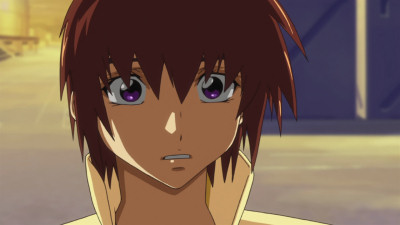 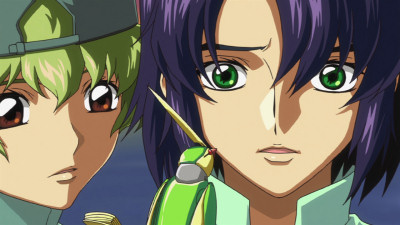 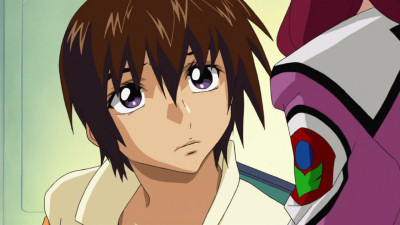 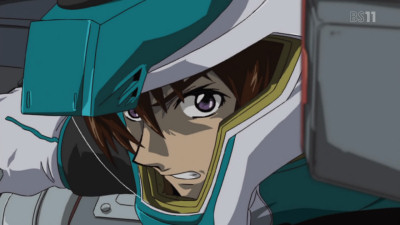 If only all of SEED looked this awesome

The comparison to Gundam 00 came up several times which makes sense as it was the first non-CE animated program to take to the airwaves after Gundam SEED Destiny. Let’s be real, Gundam 00 had some issues, especially in the second season. It lost all the tactical love, added superfluous hax, and drowned us in some of the worst relationships to grace the franchise. It was faaaaar from a fantastic improvement (well, maybe not to Destiny). Am I going to have to review that too?

The second quarter of Gundam SEED was fairly mundane and boring. I wouldn’t go as far as to say it was bad, just boring, as I felt the entire desert arc was primarily a setup period. Lots of important things were set up though, from the introduction of Calgilli, the death of the Desert Tiger, and Fray’s decline into a full blown crazy bitch.

I was looking forward to seeing Andrew Watfel’s character, the Ramba Ral of Gundam SEED. Unfortunately I couldn’t help but be disappointed. For starters, Andrew is a rather one dimensional character. He’s almost too good of a person. He’s likable, seems to treat people fairly, and otherwise doesn’t show much in the way of negative traits. This becomes an issue when you set a character like this up against the desert rebels, another likable organization. When neither side shows any real negative qualities one realizes immediately how stupid this war is and begins to lose interest in their battles once you see through the stupidity of it. Now, I get that Gundam is built around otherwise avoidable wars where each side has redeeming qualities. Yet when you remove adverse qualities viewers arrive at the “war is bad” conclusion too soon and too cleanly. This seems to be a big issue with SEED. Two sides are fighting, with very little in the way of asshole villains or acceptable cause for violence. 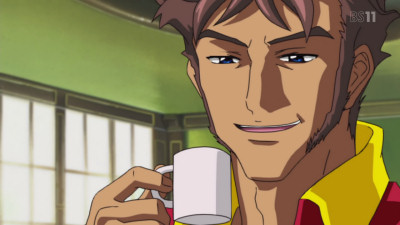 The Japanese must have very small coffee cups

A larger issue with Andrew Watfel’s character comes with his interaction with Kira. It’s too quick, too simple, too mundane. Kira meets Watfiel, very quickly realizes that he’s not a douche, and moves on. There’s no proceeding confrontation between the two or epic mid-battle argument about the reasons they fight. This lack of depth, lack of emotional oomph, comes into play after Watfiel’s death and Kira’s remembrances of their two encounters. It’s supposed to mean something to Kira, shape who he is, but as a viewer it just fell flat. It’s difficult to appreciate Kira’s thoughts when he’s flashing back to an empty motivator.

Also, what was with his random two episode chick that looked suspiciously like Roux Louka? Talk about a throw-a

While the desert arc spent a lot of time developing Andrew as an influence to Kira a lot was done with the newest female member, Cagalli Yula Athha.

Cagilli was bound to return after her brief appearance in the first episode, and it’s a welcome shift. She’s surprisingly down to earth, is able to take on a lot of responsibility by herself, and is a properly flawed character. That is to say that she’s well balanced with little issues like hot-headedness and overconfidence, none of which really get in the way of the story or come off as annoying. The more I think about it the more I realize her positive impact on the series. With anyone else, that random meeting with Athrun on the uninhabited island would have been outright awful. Her presence also serves as an important counterbalance to other key female characters such as the vapid Lacus or psycho Flay.

Flay, oh how everyone loves to hate her, and it’s easy to see why. With each episode in the second quarter of SEED she becomes an amazing caricature of an awful, need, manipulative woman. She’s the only person on the entire ship who does jack shit. Instead she goes full teenage drama on everyone. Though, and I know I’m going to get a lot of hate for this, in the end it works. It’s interesting to see Kira pushed away from his friends by this blunt wedge of a woman. Maybe it’s the complete lack of subtlety which I appreciate. Either way I’m more annoyed at fans who think that she’s worthy of respect or think she has any redeeming characteristics. 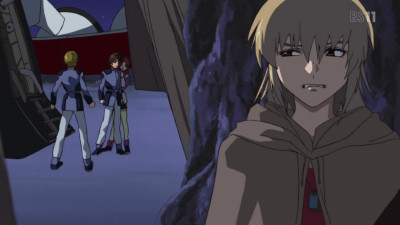 How we all feel about Flay 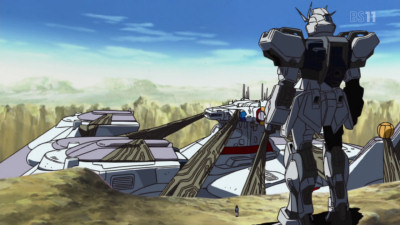 Most frustrating element of these past episodes is the amount of filler (for lack of a better word). Right after we’re done going through an extensive setting up phase with the desert arc we get the sea arc which is a thousand times worse. The enemy commander is just awful at what he does and is in no way interesting or memorable. Time is wasted on Strike trying to fight in the ocean while we’re treated with reused animation and some of the worst water CGI I’ve ever seen. Again, it’s all setup filler, this time for the Cagilli/Athrun island episode. 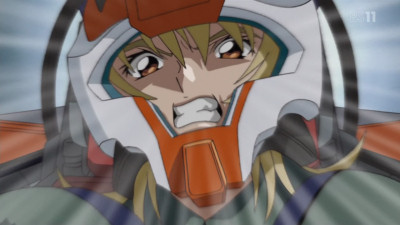 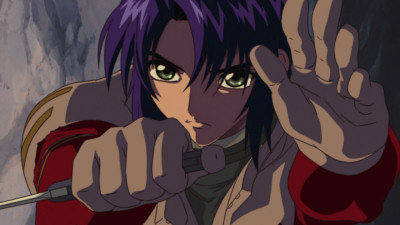 To make things worse the underwater suits used by ZAFT have to be some of the ugliest god damn things I’ve ever seen. They’re just terrible. Zero redeeming features. They can’t even effectively attack the Archangel! One can’t help wonder if the same awful designer is the one to give them their awful names. ZnO and GOOhN? What the shit. 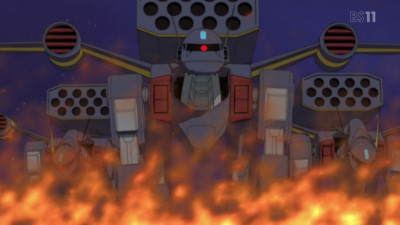 BuCUE’s are just as terrible. I remember, when SEED first aired, how excited I was for them. Maybe it was just the current Zoids fandom driving appreciation for four-legged mechs but seeing them in action finally was devastatingly disappointing. They’re poorly animated (terrible CGI with moments shifting to painfully contrasting & lazy-as-fuck cel animation) and completely ineffectual. Somehow they have no problem firing rockets accurately into caves but have a hard time hitting a stationary Strike. 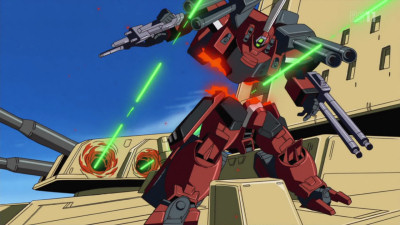 The only decent ZAFT designed suit was this cannon fodder.

Just when you think these designs can’t get any worse they get... better? Well, for a moment at least, with the the awesome Astray. I must have ditched Gundam SEED prior to this point before because I do not recall seeing them on screen years ago. Their design, while not as refined as the MG Blue or Red Frames, is quite good. There’s even one scene, when we get a nice shot of the head, where the animation is just superb. If only SEED looked this awesome all the time. 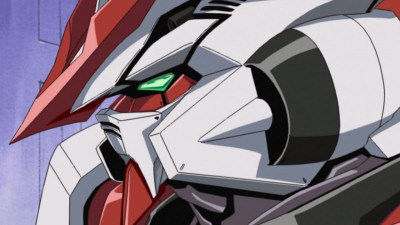 All of this takes place in the Land of Orb, or whatever Orb’s country is called. It’s basically Anaheim Electronics on steroids. This development was easily the best part of Q2. After a completely unexpected battle against the other X units, out of nowhere comes this country. It was barely mentioned throughout the series and now it seems setup to be a big player. I’m really hoping this turns into Zaft v. Earth Federation v. Orb. It would be a welcome change to the formula (by using the Zeta formula) and might actually produce some interesting developments. 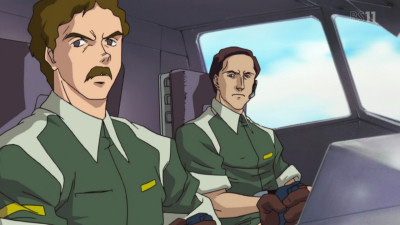 Speaking of interesting developments there are a couple things dropped here and there that will probably come into play greatly later, namely Kira being a “berserker” and that he has a brother (probably Athrun). The berserker thing I get but it really doesn’t help the whole the whole coordinator mythos. I do like how they explained the history of coordinators and that of George Glenn, though it’s pretty much impossible he did all the stuff they said he did. Pilot, college graduate at the age of 17, somehow got into professional football out of MIT and even got an a olympic medal (in football I guess?). It’ll have been a massively wasted opportunity if one of his descendants left behind at Jupiter doesn’t come back and Scirocco everyone. 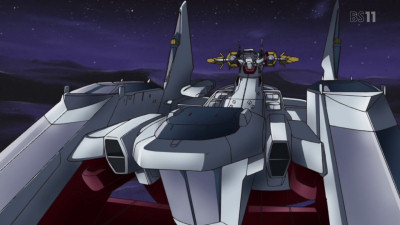 Coordinators can do everything. Except shoot down this wildly undefended ship.

There were some weird references in these past few episodes, such as Glenn’s ship the Tsiolkovsky being the same as Scirocco’s Jupiteris from Zeta Gundam. Or Lacus drawing a Turn-A mustache one one of her Haros. It’s all very contrived. A bit of, “nudge nudge look what we threw in. Recognize it don’t ya?” 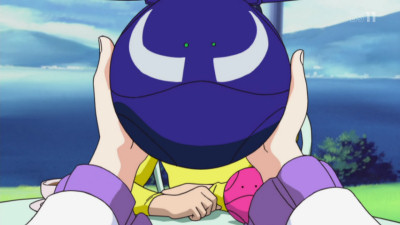 Despite my complaints I’m somewhat eagar to see what happens next following the introduction or Orb and it’s mobile suits. It's as though they planned things knowing to put boring sections in the middle of each quarter and tie them together with some solid developments. The Freedom Gundam and another set of four antagonists have made an appearance in the new opening so it’s apparent that the mid-series change up is fast approaching. I’m quite skeptical though. So far no one they’ve introduced has been able to really be a compelling counter to Kira and their suits, as best I can tell, are ugly as shit. 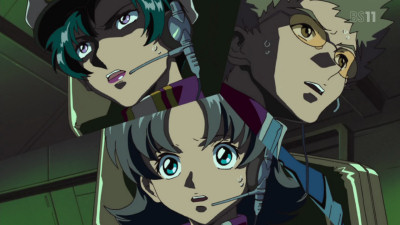 P.S. - It’s worth noting that Sunrise removed the clip shows from the remaster. As such my episode count used for these reviews reflects the 48 or so episodes still remaining post-update.

P.P.S - This shot reminds me of Wing for some reason... 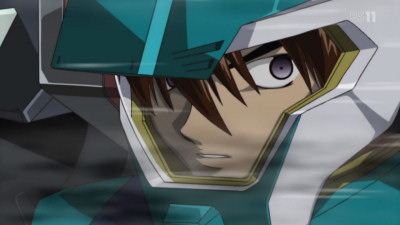