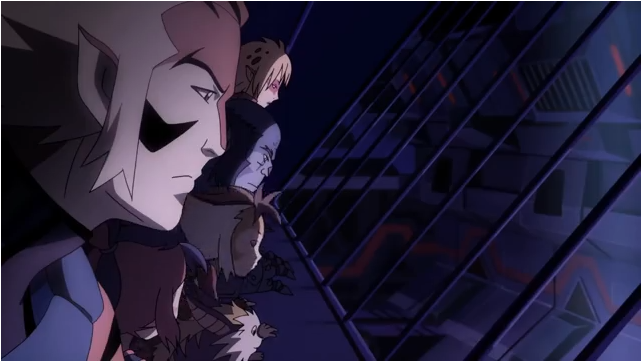 So after seeing his adopted bro making out with his crush, we start this next batch of episodes with a fuming Lion-O. Yeah he seems to have gotten the hang of the Sword of Omens, and has gained enough respect from his fellow felines that herding them together so he can disparage Mumm-Ra as a loose woman is easier, but... that's only before the cockblock. 3/5ths of this episode batch involve Lion-O coming to grips with Cheetara picking Tygra over him, and by god he tries. It's actually a nice bit of development for him, since the show has him try to act above his heartbreak as possible, but once the big two-parter begins it shows he still has a lot to work with even with his team's loyalty present.

Thus two-part “Trials of Lion-O” becomes the highlight of this episode batch. Taking its cue from the original series five-parter “Lion-O's Anointment”, an apparently dead Lion-O must undergo a series of trials against each ThunderCat (or at least a manifestation of them), if he wants to live another day. Granted it is obvious Lion-O will live again, but like the “The Duelist and the Drifter”, the appeal of him and him alone working against the world is worth the watch. Working alongside his arc are the other ThunderCats who not only have to make do without their leader, but also retrieve the Sword of Omens from Mumm-Ra. Again, good to see them out of their element, especially Tygra who after bellyaching how he is better choice for King, now gets to be such.

The two-parter is also helped with the introduction of Jackalman and Monkian (albeit renamed to Kaynar and Addicus respectively) to the series. Whereas Slythe is left pretty much untouched in terms of personality, the other two have quite radical changes to them. By radical changes, I mean they're no longer bumbling henchmen, but murderous generals which the show takes great strides in letting you know of that fact; whether be it offscreen bird murder or dog person slaughter. Their presence give those 3/5ths of this episode batch a nice edge given the plot going on.

Then right after... The series decided to start twisting the knife by way of character development. By Episode 18 (“Survival of the Fittest”), there will be only eight episodes left of this series, and it and the episode before it (“Native Son”) does nothing to soothe the eventual hurt of its cancellation. Both are very good backstory pieces, where we learn more about Tygra, Wileykat, and Wileykit. They provide the right kind of tragic fare for an fantasy action show, fleshing them out in welcome ways, revealing new things about them worth knowing. Tygra sadly gets the brunt of the hurt, since his episode (“Native Son”) is nothing but one big sucker punch not just to him but the audience, given what we already know about the Tigers and their relationship to Mumm-Ra. Wileykit and Wileykat's backstory (“Survival of the Fittest”) is a pleasant surprise, given my initial belief they were orphans, but it does reveal how despite their Artful Dodger ways, they came from a good place, and the following result is their chipper, innocent, albeit thieving selves.

As I said, it hurts because I know this series will be canceled and we're just getting around to learning more about these characters...

...But I'm at the point of no return. I gotta finish it. I have to accept the pain.