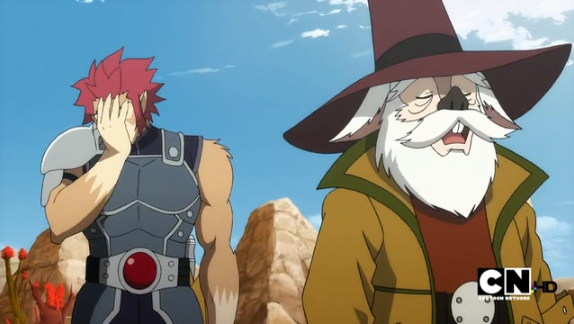 I gotta end this watchthrough with a rotten pun. Sorry.

So after skipping a week so I could watch some OG Dragonball (a decision I do NOT regret), it's time to cover these final few episodes. Long story short, they're good but so good it really hurts when one realizes that after the final scene, it is all we've got. Short story long? Well... let's see what interested me about this.

Coming out of Episode 22 I expected the following episode (“Recipe for Disaster”) to reunite the bunch for the next Stone. Instead we get another filler episode involving a disturbingly large, if sweet caterpillar, her snake oil salesman master (a species from the original series), and of course Lion-O's attempt to woo Pumyra. The last one makes for amusing moments, given how Lion-O is socially awkward in being sweet to her, which not only involves her face getting an allergic reaction to a flower to Tygra drinking a love potion from aforementioned snake oil salesman meant for her. The last part makes this episode worthwhile, since Matt Mercer really nails how out of it the usually snarky and sometimes super serial Tygra is when under the spell of a potion that makes him all touchy feely. Plus he calls Panthro a 'silly goose'.

Then I go into Episode 23 (“The Soul Sever”), and while they are reunited with Wileykit and Kat, they realize the next stone just might actually be above in the clouds. After some great continuity featuring a character seen in the premiere, we then descend into another set of deep lore for the series. Sure they could be building stuff to fly, but they get caught up in the machinations of one Soul Sever (who of course is played by Jeffrey Re-Animator Combs). It feeds into a small bit of Lion-O's frustration with technology seen in the first part of the series, but this part is done well thanks to Combs's performance, the plight of his character, and the rather dark twists and turns the episode brings to escalate the conflict. It could be worse, and I'm not at that much a loss.... yet.

The BIG loss is what happens after Episodes 25 and 26 (“What Lies Above” Parts I and II). In their new 'Feliner', our heroes find their way to where the Book of Omens is pointing: a city in the skies. Here we finally meet this series' iteration of Vultureman, Vultaire. With a conniving voice supplied by Michael McKean, it's pretty much a given he's gonna be a bad guy, and he doesn't disappoint. He condescends to our heroes, reneges on bets, and ultimately joins sides with Mumm-Ra (“What can I say? I'm a politician.”); doing so with graceful disrepute.

However, it is nothing compared to the disrepute that would befall Lion-O: Pumyra being a spy for Mumm-Ra. Unfortunately I spoiled this for myself way long ago, but didn't know how deep the rabbit hole went. Granted I shouldn't be TOO surprised given her rather on-and-off uncertainty with Lion-O's mercy, and her buttering up of him when things get interesting, but it's still surprising nonetheless to see how she REALLY hates him. Unfortunately, despite a good twist in the climax where it turns out Lion-O and his team are not THAT alone on Third Earth, Mumm-Ra still escapes with Pumyra vowing to kill the Lord of the ThunderCats the next time.

It's a downer of an ending to be sure, but not TOO much a downer. It would have been worse if it were a cliffhanger and everybody was in peril, but right now? It's at a hopeful impasse. Wileykit's final speech to Lion-O alludes to a hopeful future because of what he has done despite his mistakes. It's impacting since it is from somebody who was never there at those important moments in the premiere from Lion-O seeing his father murdered to Jaga's first sacrifice. And as Lion-O raises his sword to at least this victory, we get a sense things will turn out for the better, and when they do turn the tide we'll see it happen.

But life is just too goddamn cruel.

Overall: So with that, is the 2011 iteration of ThunderCats the bee's knees of reboots? I guess so.

I said this before, but even after seven years it still looks terrific, and little touches like this nod to the opening of the original series is welcome. The tactile grit of the combat, deprived of the casual avoidance of fist touching face (a'la Avatar/Korra) or covered in flashes (various DC animated series), is a sight to behold. The characters, while at first distant, eventually develop their own quirks and foibles. And the story? It's a nice upgrade from the original series and does enough respect for the lore while adding new things to keep attention. Granted it's a typical quest series to find certain missing items, but the world is varied and lively enough to make the trip worth taking.

...But on the other hand? Was that really a good thing with the disappointment I feel over its end?

Sure they said they planned this series for 52 episodes, with 13-episode arcs (one for each stone, and then a final run), but we end at half of that. It's blueballing at its most intense, since this was a show that showed it was no slouch in anything. In fact, it just makes its treatment by Cartoon Network, nevermind Warner Bros even MORE vexing. Why renege on this with so much intensity while Young Justice (which is still a good show, mind you) gets to survive? In fact... the treatment of this show when it ended is ALSO vexing. Young Justice got Netflix streaming, and a vocal production crew which said that if the audience wants more, watch as much as they can to show interest. ThunderCats 2011 never got that treatment, and was relegated only to DVD releases and a late night showing on Adult Swim's Toonami. Hell the showrunners have pretty much given up on it. They have not said to express support by buying and/or watching the show, and they've already spoiled a good portion on what would've happened had there been a second season.

...As if it would heal the wound of an unfinished series.

Then ThunderCats Roar comes in and sticks its thumb in said wound, and I'm not even sure if it thinks it is fun because it does not know, or it knows perfectly and is being an ass about it. I watched the 3 minute feature announcing it to see what the showrunner has regarding his overall vision. He speaks of the original series with fondness, but there is no mention of the 2011 version, as if he had never watched it, nor chose to watch it, even worse if Warner Bros said “DON'T MENTION THE REBOOT!” as if it was Basil Fawlty and the miffed 2011 fanbase were Germans. But when the showrunner says “[Roar] is about praise and love for the original” when the 2011 version was also that, and how it is “The ThunderCats show * I * want to see”, the hope dims. And not anybody has even said something in the vein of the voice actors in regards to a Teen Titans Season 6; that if you watched Teen Titans Go! To the Movies, then it may happen.

So where's that for ThunderCats 2011 and how maybe making Roar a success can help bring it back? Nowhere. And that's a shame.

I'm just gonna end this article now, because it is so sad. You should watch ThunderCats 2011 regardless, but know you will be disappointed. Know your heart will break. And know until somebody up high says otherwise, this is the last shot you'll ever get for this very good reboot. 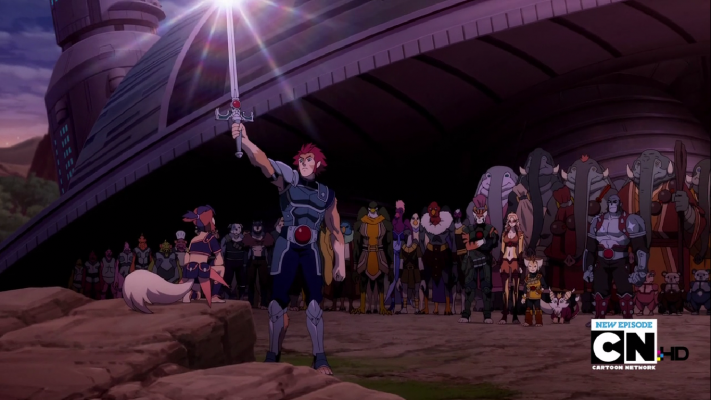