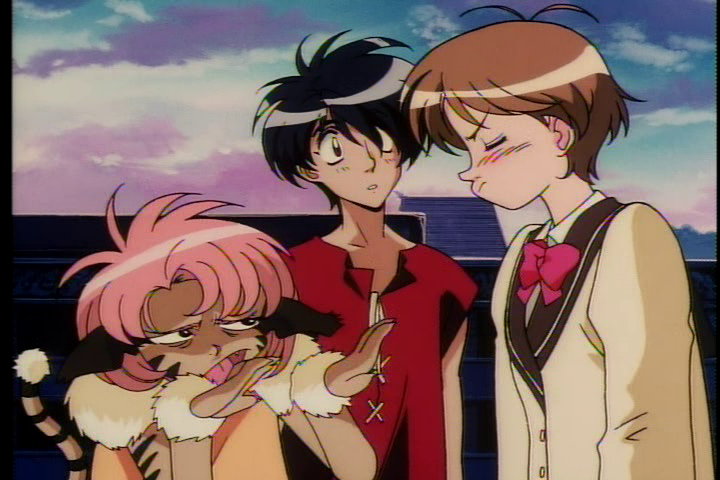 Savour for a small moment this shot, for it speaks volumes about certain facets of each character's personality. Once you’re done, move to the next paragraph.

Like I’ve mentioned earlier, the Freid arc is my favourite arc in the series. The crux of its appeal I will speak of later, but for right now, here’s a supporting reason why it is the case. Allow me to direct you to what is their royal palace: 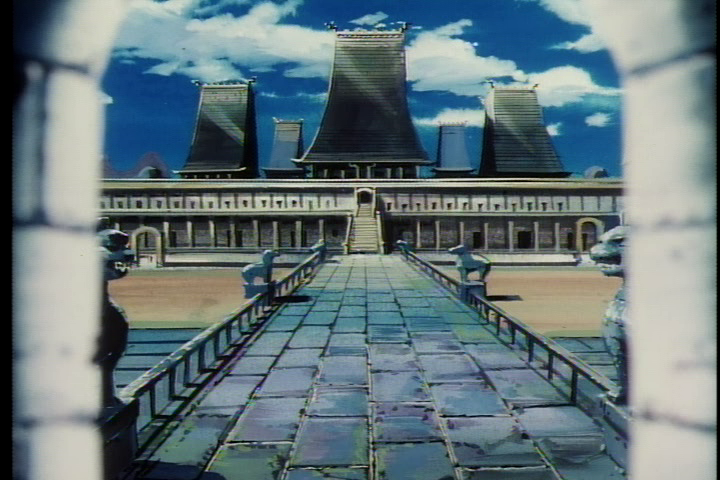 Fanelia has Japan; Asturia has European canal cities; Zaibach has the Industrial Revolution; and Freid has the ancient Khmer kingdoms for inspiration. It’s a type of civilization we rarely see in animu, never mind other mediums outside of the successor countries (only other example I can think of right now is the Gamecube game Eternal Darkness), thus it is a unexpected but welcome sight. I’m very hardpressed to think of any other recent animu which takes all these unique civilizations and have them coexist in one world. The question is why haven’t they? Where is that recent fantasy animu in the vein of Escaflowne that does what it does oh so well? I’m open to suggestions.

Anyway, given Mr. Schezar being incapacitated, everybody takes a breather in this episode after a very intense reunion. Given my increased observation of the show, I’m surprised I forgot Millerna and Hitomi have one notable moment together. Millerna is the first of the two to note how they should be friends given the circumstances, and had the good sense to bring Hitomi’s duffel bag with her when she left Asturia. It is a nice scene I’m glad is there, for it reveals a show not keen on turning all romantic tension into a battlefield. The scene where that first picture above comes from is great, for it also lets Van continue his warrior training and gives him time once again to really build rapport with Hitomi. A person who he once dismissed so readily has now become an integral part of the team. A natural progression for all involved.

Then we hit the most important facet of the episode: the introduction of Prince Chid. Instead of a fairly young man with a swarthy Khmer complexion like his citizenry, the progeny of the previously mentioned Princess Marlene (now dearly departed), and the Duke of Freid is a fair-eyed blonde child who bears a similar resemblance to… 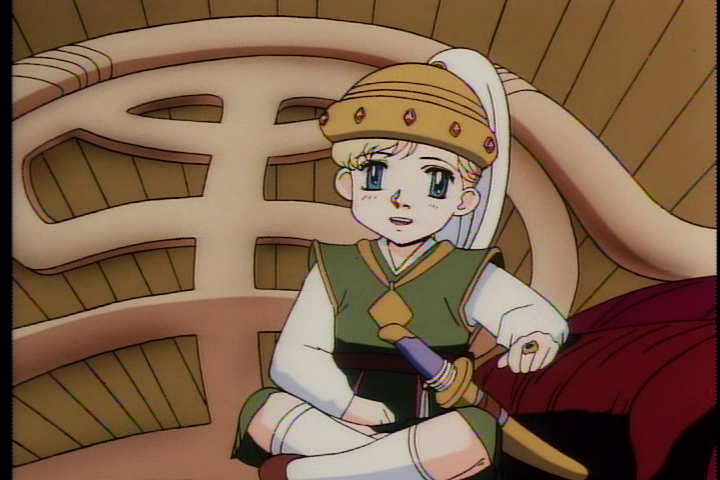 Oh dear. We’ll talk about that later though. Unlike the conniving King of Asturia or Emperor Dornkirk, Prince Chid remains an innocent child still learning how to run a country. He is dedicated to becoming a just ruler, given how the late Marlene regaled him with stories of how heroic Allen is. However his wide-eyed innocence is shattered seeing Allen for the first time in a weakened stated, and he is swayed too readily by the machinations of Zaibach in this episode. It is a welcome dynamic when the kingdom in question is against our heroes not because of some connivance based on political expediency but naïveté of forces beyond their control and knowledge.

This is done with fantastic creativity when Folken introduces us to another race of species in Escaflowne: the doppelganger. Zongi’s design remains a rather fantastical, if grotesque, appearance as it shows a dark side to the species diversity in Gaea. We’ve met bucolic wolf-men, irksome catgirls, and polite dolphinmen, but we’ve never seen a race of beings with this caliber of danger and foreboding. Even Dilandau, a bloodthirsty fire fetishist, is turned off by Folken’s desire to use him. He does considerably well though, having a captured lackey of Dilandau convince Freid that Allen failed to start a coup in Asturia and thus put our heroes behind bars by episode’s end. This may be the big flaw of the episode, due to how easily they take the prisoner’s word for it. Maybe in their world, the performance is SO compelling, yet from our point of view it doesn’t seem that way. Then again, the doppelganger is in the form of a well-respected and trusted hypnotist of Freid, so there’s that too. Even more distressing, thanks to the information given to him by the lackey; he now knows the special talent Hitomi has, and the next episode Hitomi dies.

Cat’s Delicacy – If I remember correctly this is only played during Episode 2. It’s a peppy piece that accentuates Merle’s catgirl curiosity in one of the most lighthearted moments of the series. If you remember the moment it all works perfectly, from Merle noticing Hitomi’s stuff, rifling through it, then stealing Hitomi’s pendant. The show then cuts to a corridor where Merle smoothly transitionings from bipedal run to a scampering away on all fours. Hitomi tries to catch up with her as best as her running abilities can… then we get to her eavesdropping on Van and Balgus’s sword training.