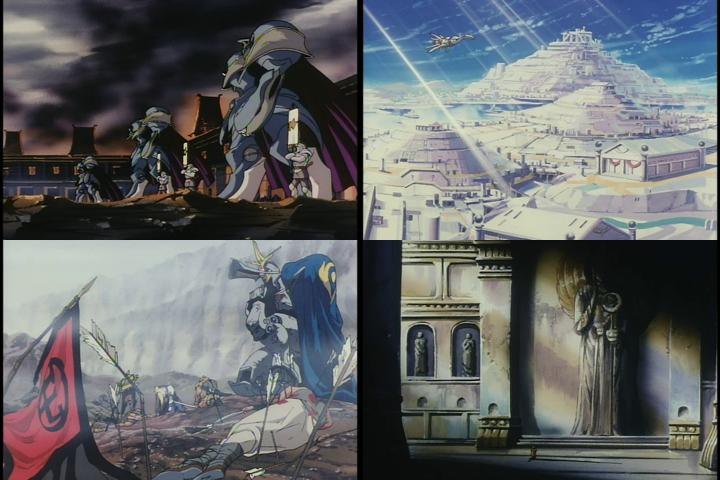 Interestingly enough, the subplot between Allen and Chid is sidelined and shelved by episode’s end. In a more easygoing show with less urgency than Escaflowne, they may have covered more of it. Here? It seems Duke Freid’s declaration that Chid is HIS son put the kibosh on any further development. This is all the better for the show, since it makes his union with Marlene all the more tragic. Chid is the last vestige of it, and while he would want to console a child who is being forced to grow up, he knows he cannot because it may make it worse. Their last scene together, a silent passing between them in a hallway, is more than enough.

Van and Hitomi also reconcile after her outburst last episode, and it’s interesting how both admit some fault in that scene. Van apologizes for being inconsiderate, Hitomi admits some blame for overreacting due to stress. It’s a wonderful touch showing them as growing characters. The more interesting part is the strange, almost out of nowhere, leap of logic Van has. Using Hitomi’s Dowsing ability as its base, he focuses instead on picturing a more perfect union with Escaflowne, wanting to ‘become one with it’. On one hand, it seems odd he would think that given how his piloting skills are not half bad. On the other, Van isn’t really thinking anything deep, he’s just spitballing and experimenting because why not. It’s a nice bit on Van trying to be resourceful in thought as well as combat.

Anyway, enough with characters it’s time for story. Finally at the series midpoint, we are revealed what Atlantis is all about. Essentially it’s the age old classic tale of hubris by a highly advanced civilization, and the show does a great job detailing its fall with the prerequisite amazing visuals it is known for. We also are informed of how Freid is the guardian of the now sealed Power of Atlantis, protecting it from the likes of Zaibach. Of course, such duties become rather moot when an overpowered foe wipes the floor with you in the last half of the episode. Strangely, Duke Freid within minutes after his guymelef is felled by Dilandau, realizes the one-sided battle he’s been fighting must be Fate telling him to let the Power of Atlantis be revived. This segment before his demise is something I forgot, but now I’m juxtaposing it vis-à-vis the fact Escaflowne was originally to be much longer. It raises the question whether or not the Duke would struggle before ending that conclusion, or if there’d be political intrigue. Alas, we will never know, and we must take what we are given on the Duke’s final ruminations on fate and how future progency will manage.

It sounds bad, yet on the other hand it takes place on one of the best deaths in all of anime. While very unsure of the Duke’s decision to cede the battle to Zaibach, you can tell his final stand is sincere. The Yoko Kanno music, the desperation of Allen to save him, his final gaze at Allen despite the events of the past, and his last moments remembering Marlene, revealing they both loved one another in the end, all coalesce into a great emotional peak, and over a supporting character no less. That is greatness. That is a moment that defines what makes Escaflowne so great. Then when they leave to lick their wounds… this scene happens. 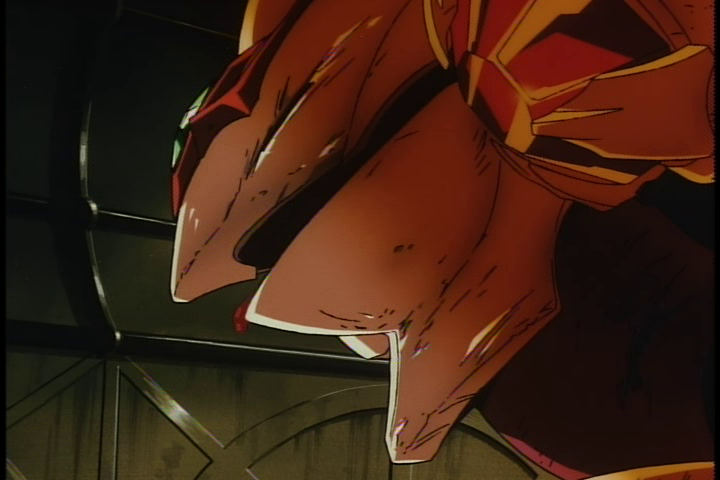 Short Notice – Always loved the “Next Preview” music. How can you say no to the intense sitar and drumbeat, as exciting, if disjointed, bits and pieces bombard you with great intensity? Then as quickly as it began, there’s an ethereal sound effect with the episode title. That’s terrific, and after cliffhangers like the one above (and the one next episode), it is a perfect fit.