Episode 110,"Who is the World’s Greatest?! A Battle Royal Match to Decide!! 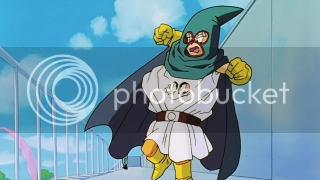 Episode 11, "Will Son Goku Make It In Time?! The Fight Continues In Three Hours"

Synopsis: Piccolo leaves Gohan in the wilderness to survive on his own for six months, much to the child's distress. Kami contemplates on the change in Piccolo and his pending death. Goku continues down Snake Way, nearly falling off and discovering that below lies a whirlpool to Hell. Master Roshi informs Chi-Chi and Ox King of the current situation. Gohan transforms when he gets a glance of the full moon, but Piccolo destroys the moon and removes his tail to prevent it from happening again.

Episode 3, "A Battle with Their Lives on the Line! Goku and Piccolo's Fierce Suicidal Attack!"

*****SPOILERS***** Synopsis: Goku and Piccolo attack Raditz, who proves to be more than a match for the both of them. Piccolo attempts a new attack, but Goku is unable to keep him distracted long enough for it to work. Beaten, Goku is surprised when Gohan bursts from Raditz's pod and headbutts Raditz, injuring him. Goku grabs Raditz and holds him so Piccolo can attack, and Piccolo's beam attack pierces the brothers. Piccolo brags about the Dragon Balls to a dying Raditz, who transmits the conversation to his colleagues on another planet. Goku passes away as Kururin and the others arrive.