After a two week delay it's time to finally get this kit ready for paint. First though, the last pre-paint photo you'll get... 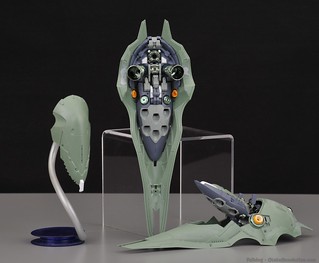 The wing binders went together without much issue, even if there are a few pieces that don't fit all that well. The piece of the binder that flips outward is held by arms whose male parts are way too small for the female parts they slot into*. The funnels don't securely fit into place either, not sure if that's something I'm doing wrong or if it's just poor design like so many other aspects of this kit. I'll probably end up trying to get some gray or green coloured putty to hold them in place. The connection arms between the binders and the rest of the kit, not pictured, offer convoluted and worrisome routes for the LED cables. One of them is missing a piece but it's purely decorative and its absence will hopefully go unnoticed.

Anyhow, paint time! While the last two weeks I've mostly been a lazy ass, from a modeling prospective, I did find the time to do some paint sampling. Many greens were painted upon many hapless spoons. After much consideration and much flip-flopping I've finally settled on a colour scheme. While I think it'd be great to do a Kshatriya in a nice lime green, this isn't the kit for it. Instead I'm looking at a mix of greens, 5 in total, so give plenty of detailing and subtle contrast options.

Here's the full list of colours in no particular order...

The only thing that's going to go unpainted are the yellow pieces. I like the yellow and my favorite yellow colour would just match it. Assuming that it looks good with just a top coat on the base plastic that is. As much as I like the weird greenish tint of the coated shiny pieces, I don't think the colour will work that great in so much quantity and its thickness has an adverse effect part fitment. Thus, all but the pistons will be stripped and painted.

Before getting the pieces off to primer I'm going over each a second time with files, sand paper, and hobby knife where required. All this through head mounted magnification...


Since there are so many pieces getting different colours I decided to put them in individual containers marked with the future paint and the paint sample for quick reference... 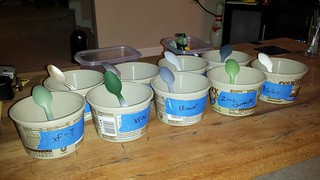 I've decided to break the kit into three chunks, the arms & torso, the waist & legs, and the wing binders. Staring with the arms & torso I'll prep for primer, paint, detail, top coat, and assemble. Then I'll move onto the waist & legs, then finally, the wing binders. Three chunks will hopefully be easier to manage than doing the whole thing at once. In theory it would be faster to do them all at once which is what I traditionally do. This should help me slow down and give more attention where attention is due.

So, any chances on getting this done by Nov 1st? Wish me luck!