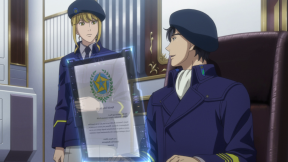 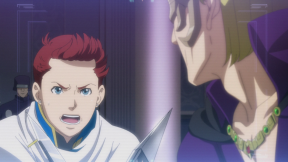 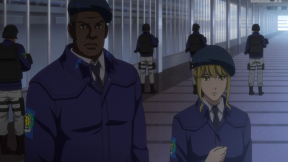 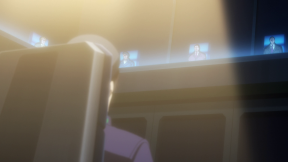 I believe this is the best episode of Legend of the Galactic Heroes: Die Neue These thus far. A practically perfect episode of this. It's not action-packed, but it is brilliant.

It's a basically dead-on adaptation of Chapter 5 of the second book, from Yang being summoned, to his conversation with Caslenes and Schönkopf, to Julian's practice on the range, to Yang asking about Julian's height, to the television show about a prince regaining his throne, Yang's time in his "quarters", to Yang's interactions with the inquiry, to Lt. Greenhill's conversation with Bay. The only different things are that, for one, Yang's wondering about the FPA possibly allying with Goldenbaum remnants is turned into a conversation with Greenhill, and secondly, they have the beginning of Chapter 6 at the very end of the episode, probably to spice the talkative episode up with an exciting cliffhanger.

Not that adding an exciting cliffhanger was necessary, because this episode was exciting enough with just Yang answering questions. The inquiry, staffed mostly with Trunicht puppets, is led by big bag of wind Negroponte, who becomes deliriously angry at several parts. But Yang Wenli, our guy, is adept at speaking around the bullshit leveled at him. Every answer he gives is dripping with his sardonic but understated contempt for his questioners. In a series with plenty of space combat and political maneuvering, it's Yang Wenli volleying shots back at Negroponte that has brought me more pleasure than anything else so far.

I love the added joke where Yang keeps attempting to use his computer, only to be disappointed that the network link is blocked. At the end, he decides to write his resignation on good old fashioned paper. One of the amusing things is, in the old series, the OVA, Yang was using paper the whole time, but the newer series often has them use personal computers to nail the point that this is in the far future. It makes more sense that Yang should at least try to use his computer to do what he wanted, but it also makes sense that the powers-that-be lock him out of the network.

In the next episode, we'll see more of the inquiry, more of Yang's awesome responses, and possibly a little space warfare. 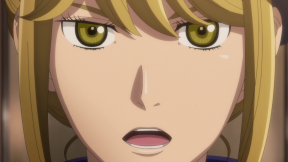 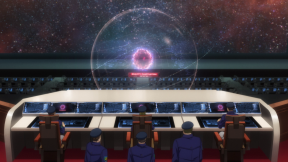